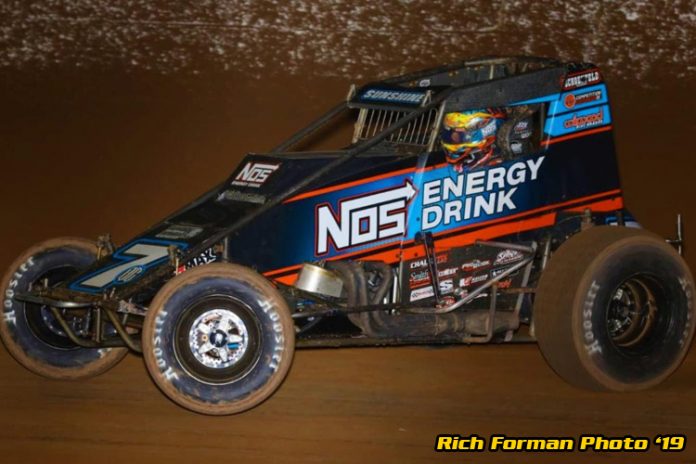 By RICHIE MURRAY
SAN TAN VALLEY, AZ – Entering the final weekend of the year trailing by 44 points in the USAC AMSOIL National standings, Tyler Courtney’s goal was simple. Win a championship.Simple enough. But to do that, you’ve got to persevere under pressure and tense situations that may arise around you. You’ve also got to avoid catastrophe whether it’s by your own doing or avoiding the calamities around you in order to maximize your points.

Courtney checked all those boxes on Friday night in the opener for the 52nd annual Western World Championships presented by San Tan Ford at Arizona Speedway to win his eighth series feature of 2019 and the 25th of his career, tying him with Steve Butler, Jay Drake and Chris Windom for 20th all-time.

“We came here this weekend to do one thing, and that’s win a championship,” Courtney reiterated. “You’ve got to do that by winning races. We may have fallen into one a little bit here, but you’ve got to be lucky just as much as you’ve got to be good.”

Courtney, the defending Western World champion, started the feature from 5th, where he had a front row seat for a 30-lap war of attrition that plagued many of the front runners for a variety of reasons.

Chris Windom mostly dominated from the pole position for much of the first half of the event following a lap one stoppage for fast qualifier and heat race one winner Logan Seavey who slowed with a mechanical issue on the opening circuit and was sidelined for the remainder of the evening.

In reverse of the midget race that proceeded the sprint feature, the groove was up on the fence where Windom led the charge around the 1/3-mile dirt oval while National championship contenders Courtney and point leader C.J. Leary ran 6th and 11th, respectively, with Courtney throwing a shower of sparks from brakes in the turns for the time being.

Just before midway, second-running Justin Grant had caught Windom, taking a peek underneath Windom on both ends of the track just as the ring of rubber began to take hold on the top side.

Grant successfully made the pass of Windom stick in turn one on the 17th lap with the two making contact, Grant’s rear to Windom’s front bumper. Windom fell back behind Grant, but it didn’t take long for him to fire his next shot in turn one two laps later to reclaim the lead.

On the 21st lap, Grant brought the heat once again with a turn one slider across the nose of Windom to secure the top spot with less than 10 to go. Grant became the locomotive pulling the train with Windom and midget feature winner Kevin Thomas, Jr. now closing in rapidly in third.

On the very next lap, the unthinkable happened. As the top-three entered the middle of turns one and two, they approached the lapped car of Kyle Shipley, whose right rear tire was pouring smoke off the corners. As Shipley rounded turn two, he drifted high off the rubber, half-spinning right into the path of not only Grant, but also second-running Windom, third-place Thomas and fourth place Schuerenberg, who all plowed into Shipley’s stopped car.

Just behind, resting near the outside turn two wall was 10th running Chase Stockon and point leader Leary. With only nine laps remaining, Leary’s pursuit of a championship seemed to be in peril. However, he restarted and managed to wheel back to 6th at the checkered following a slew of attrition and tire wear that developed down the stretch.

Windom and Schuerenberg were out, and Thomas dropped out a few laps later, while Grant, Leary, Stockon rejoined the fray. USAC/CRA Sprint standout Austin Williams inherited the lead with Brady Bacon and Courtney now residing in his shadow.

However, Williams bid for a first career USAC National feature win came to a bitter end with just five laps to go as his right rear tire gave way in turn 4 while a melee involving the cars of Jake Swanson, Thomas Meseraull, Max Adams, Brody Roa and a helicoptering R.J. Johnson ensued behind him.

The restart put Bacon up front ahead of Courtney. Bacon assumed control, setting the pace until three laps to go when 19th running Chris Gansen slowed to a stop in turn four with a flat right rear of his own. When racing resumed, 4th running Damion Gardner and 12th place Kevin Thomas, Jr. were the next to fall to the wayside with flat tires. Under caution, the cords on Bacon’s right rear became readily apparent, thus placing him in the unenviable role of sitting duck on the lap 29 restart.

Courtney smelled blood in the water and went on the offensive, sliding underneath Bacon in turn one to grab the lead. Just mere moments later, Bacon slowed to a crawl with the plodding sound of flat right rear rubber entering his ear.

Courtney was now in his Shangri-La for the final restart and where he’d stay for good, encountering no trouble at the end en route to victory over a hard-charging Justin Grant, who returned from the earlier incident to finish 2nd. Jason McDougal was 3rd ahead of KSE Racing Products Hard Charger Charles Davis, Jr. in 4th (from 16th) and Stevie Sussex rounding out the top-five.

With the victory, Courtney has now closed the gap to 26 entering Saturday’s finale in the race for the 2019 USAC AMSOIL National Sprint Car championship.

“Our team hasn’t given up all year,” Courtney praised the crew of his Clauson-Marshall-Newman Racing/NOS Energy Drink – Competition Suspension, Inc./Spike/Rider Chevy. “We’ve been behind the eight ball ever since the first race in Florida when we ran 18th, but these guys never give up and they gave me a great racecar again. One more night to try and seal this deal up and we’re just excited about the momentum we’ve got.”