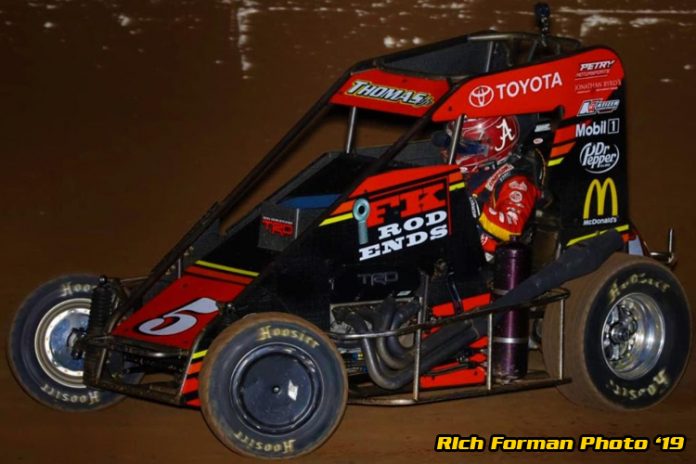 SAN TAN VALLEY, AZ – Since his car first rolled off the trailer for practice one night earlier, Kevin Thomas, Jr. has had the propensity to be quick in a midget around Arizona Speedway.

That tendency carried into Friday night’s Western World Championships presented by San Tan Ford where Thomas led all 30 laps and fought off a hard-charging Zeb Wise who nearly ripped away the victory in the final laps of first ever visit for the USAC NOS Energy Drink National and Western States Midgets to the 1/3-mile dirt oval.

Thomas (Cullman, Ala.) found the groove to become the fastest driver in practice on Thursday, then admits his lackluster (by his standards) qualifying run put him in position to capitalize for his second series victory of the year and the sixth of his career in his Petry Motorsports/FK Rod Ends – McDonald’s – Dr. Pepper/Bullet/Speedway Toyota.

“We’ve been working so hard with our team all year. Everything kind of aligned tonight,” Thomas explained. “We’ve been fast right out of the box, but I screwed up there in qualifying. I screwed up just good enough to get us on the front row.”

Thomas was 10th quickest in qualifying, and by virtue of four different drivers missing the transfer through their heat races, that moved Thomas up to the pole position for the 30-lap A-Main, a fortuitous circumstance that Thomas took full advantage of.

From the get-go, Thomas utilized the bottom to lead early while Wise, celebrating his 17th birthday on this day, drove under outside front row starter Gio Scelzi on the bottom of turn two to take second. All the while, Thomas had constructed a one-plus second lead, which he had to rebuild no less than four times in the first half of the race following a bevy of yellows.

Thomas commanded the race for the bottom with much of the top-five aligned in formation behind him while a couple of takers at the back end of the top-ten took the high road to no avail.

The lead for Thomas had grown to 1.438 seconds with 10 laps remaining when traffic loomed on the bottom, creating a possible scenario which could’ve forced the leaders off the bottom and into the unknown during the latter stages of the race.

The possible consternation subsided as 21st running Thomas Meseraull slowed to bring about a caution, erasing Thomas’ advantage, but put him in position with the lead, a clear track and the lapped car of C.J. Sarna between he and second-running Zeb Wise for the lap 21 restart.

Wise disposed of Sarna and quickly went to work on Thomas, this time sticking with and roping in the leader with the laps waning. Wise was just a half car length back and to the left of Thomas as the two raced side-by-side across the stripe on lap 28. Thomas zipped back to the bottom line to slam the door on Wise entering turn one.

September’s BC39 winner, Wise, stayed right within touch of Thomas, quite literally, with Wise’s front bumper making slight contact with the left side of Thomas’ rear bumper at the exit of two.

On the final lap, Wise entered the first turn right on the rear chrome of Thomas. However, at the exit of the second turn, Thomas found the grip to propel away from Wise by roughly four car lengths getting into turn three. Thomas rounded the corner and headed for home with a 0.656 second victory in hand over Wise while Tanner Carrick, Logan Seavey and Carson Macedo occupied the remainder of the top-five.

In victory lane, Thomas was greeted by a steer, and eagerly accepted a ride from the animal in victory lane to the delight of the sizable crowd on hand.

“I know Zeb wanted to win on his birthday,” Thomas admitted. “But he raced me clean and he had a chance right there to probably stuff it in on me getting into one, I think. It was just good hard racing by everybody.”

For Wise, it was a valiant effort that saw him come just shy of picking up his fourth series win of the year.

“We’d been about the same speed the whole race,” Wise said. “There at the end, I tried some stuff with my shocks. We were good enough; I just think I showed him the line in three and four and he moved down. I had a chance there, but Kevin and I always race each other clean, so I wasn’t going to try anything there.”