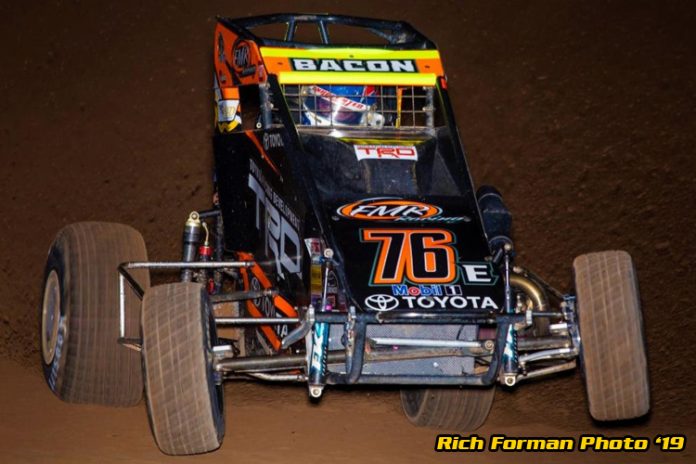 SAN TAN VALLEY, AZ – Regardless of the type of car or the venue, Brady Bacon has a knack for winning at the Western World Championships.

Entering Saturday night’s 52nd Western World finale at Arizona Speedway, the Broken Arrow, Okla. native had previously earned four final night victories in a 360 c.i. sprint car, first in 2009 and 2010 in Tucson, then again in 2016 and 2018 at Arizona.

Now you can add a victory in a midget to his Western World resume after leading all 30 laps of the feature to earn his fifth overall final night win in the event and his first USAC NOS Energy Drink National Midget victory since the inaugural BC39 in Indianapolis during the 2018 season.

While waiting to be pushed off for the feature, Bacon did a last-minute check of his surroundings and keyed in on some of the tire setups he saw on the competitors around him. The observation gave him a second thought and an 11th hour decision was made and put into action just prior to the start.

“The guys gave me a good car,” Bacon praised. “We made a last-minute decision there in staging. I was checking everybody else’s tires out and I’m like, I got to make a change here because they didn’t quite do as much track work as we were expecting. Western World has always been good to me at several different racetracks. It was good to me again tonight.”

Bacon launched from the outside of the front row in his FMR Racing/TRD – Black Watch Farms – Mobil 1/Beast/Speedway Toyota, taking the lead on the opening lap while a scramble for position ensued among the balance of the top-five.

Outside second row starter Logan Seavey slotted into second on the first lap and engaged in his race-long pursuit of Bacon. Seavey trekked through the middle in one and two and the top side of three and four in his chase toward Bacon. Seavey attempted to slide Bacon multiple times in turn one during the first third of the race to no avail as Bacon smoothly rode the cushion to fend off the Seavey challenge.

Just before midway, the top-four of Bacon, Seavey, Zeb Wise and Tyler Courtney ran in close-quarters nose-to-tail when a series of accidents slowed the action. Series Rookie Jesse Colwell was the first to take a tumble in turn two on the 15th lap. On the ensuing restart, Colwell’s Keith Kunz Motorsports/Curb-Agajanian teammate Tucker Klaasmeyer was the next to find trouble, flipping in the same area of the second turn.

Rookie Karsyn Elledge took the most serious spill of the event, flipping high and violently down the front straightway several times on the 17th lap. Colwell, Klaasmeyer and Elledge all walked away from their respective incidents under their own power.

The cushion was building up, and the path to victory was narrowing with rubber on the entry into the corners. Seavey consistently cut through the middle and was able to steer his car up to the cushion where it worked just as well. Seavey was able to drive up right to the tail of Bacon but was unable to faze the two-time USAC National Sprint Car champion.

“We biked up a couple times,” Bacon recalled. “That cushion was getting really big. It was so slick up to it, you could hit it really easy, then I almost didn’t catch the rubber there at the end. I moved down, I think, just in time. I don’t know how close he was getting to me, but if he found it first, he was probably catching me pretty quickly.”

Seavey needed either a really good run into the corner or needed Bacon to make a mistake, both of which seemed to be just out of reach. Bacon held smooth and steady and closed out his first series victory of the year to become just the second driver in 2019 to win main events in all three of USAC’s National series, joining Tyler Courtney.