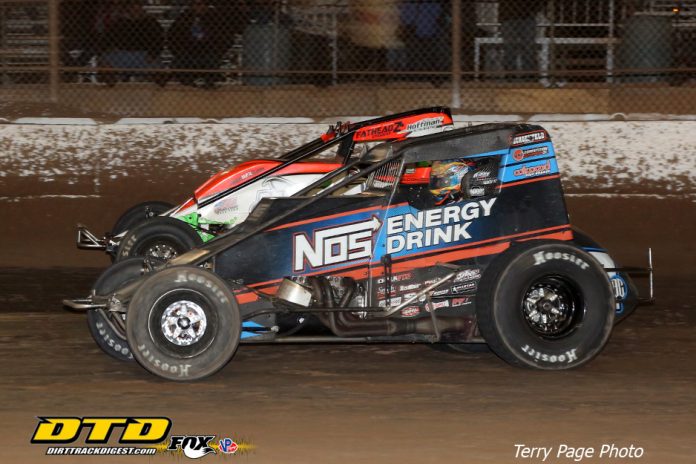 SAN TAN VALLEY, AZ – One year ago, Tyler Courtney had a view from the other side of the spectrum at the season finale. There, his nearest combatant in the title chase collected a feature win while he celebrated a USAC AMSOIL National Sprint Car championship.

Saturday’s 2019 season finale at Arizona Speedway found the Indianapolis, Ind. in the polar opposite position where he was the one standing in victory lane with a tinge of bittersweetness surrounding him. He earned a second-straight Western World Championships Sprint Car crown, and second victory in as many nights, but in the end, came up 18 points shy of a second-straight series crown behind C.J. Leary.

While Courtney was elated in one sense by picking up his series-leading ninth victory of the 2019 season and the 26th of his USAC AMSOIL National Sprint Car career, tying him with Tony Elliott and Dave Steele for 18th all-time, he couldn’t help but have the end result of the championship weigh on his mind before a celebration of victory came to mind.

“What’s going through my mind is that we lost the championship,” Courtney said. “These guys worked their tails off all year to put us in contention for it. For the year, we just didn’t get it there. We know what it’s like to be the champions and especially for the first time, it’s truly something special and I hope they get to enjoy it.”

Entering the 30-lap feature, that landscape had been laid out. If Leary finished 11th or better, the championship would be his regardless of where Courtney finished. With that on his mind, Courtney took care of the aspect he was fully in control of.

“I told (the crew) before the feature pushed off that I was going to bring back either the trophy or the steering wheel,” Courtney explained. “We brought home the trophy. To sweep the weekend in a sprint car is really cool. To win Western World in back-to-back years is pretty cool too. But second in the championship sucks. We did all we could do. We came out here and we won the race tonight. That’s nothing to hang our head on. For the season, nine wins on the year is pretty special. Winning any USAC race is tough with the competition we have year-in and year-out. It’s incredible.”

Courtney started fifth and worked his way into third by the opening lap and into the runner-up spot by lap five while pole sitter Josh Hodges, then the evening’s midget feature winner Brady Bacon, exchanged control at the front of the field.

On the 13th lap, Bacon ripped into traffic, threading needles as he scooted around the outside of Chris Gansen off turn four to escape a rapidly closing Courtney who, just moments before, had trailed by 1.5 sec., but had whittled it down to breadcrumbs by the halfway mark.

Courtney ran down Bacon in traffic, sliding underneath the two-time series champ between turns three and four to nab the position. Bacon immediately went back to work on the bottom of turn one under Courtney and emerged as the new leader at the exit of turn two.

Courtney had momentum in his back pocket, catching up to race side-by-side with Bacon into turn three on lap 17 where the two touched wheels – Bacon’s right rear and Courtney’s left rear – popping Courtney airborne before landing on all fours and continuing on, albeit while watching Bacon drive back by to the lead.

Courtney immediately jumped back on the bull and made a beeline from the top of turn four to the middle of turn one where the two nearly made contact again as Bacon slid above the cushion. However, Bacon made a quick recovery and turned down off two to dart back under Courtney and into the lead by turn three. The following lap was a rinse and repeat situation as Courtney slid Bacon in one while Bacon ducked back under and reassumed the top spot off two.

On the 20th lap, Bacon raced into one with Courtney a half car length behind. This time, the last car on the lead lap, Charles Davis, Jr., was to the outside of Bacon between turns one and two. As Bacon drifted to the inside of Davis, he wasn’t able to slide all the way to the curb in order to propel him down the back straightaway. As Bacon slid through the middle, Courtney stuck the line under Bacon and opened up an eight-car-length advantage with ten laps remaining.

By lap 25, however, Bacon had reeled in Courtney to within a couple car lengths distance when Justin Grant and Jason McDougal found trouble in turn two. Grant landed upside down and walked to the ambulance under his own power for further observation.

During the red flag period, steam began to pour from Courtney’s resting car, which was revealed to be a result of a hole in the radiator. Earlier in the night, Courtney and the team qualified fourth, but were forced to swap out the engine before their heat race in the Clauson-Marshall-Newman Racing/NOS Energy Drink – Competition Suspension, Inc./Spike/Rider Chevy.

Friday night’s Western World midget winner Kevin Thomas, Jr. was the man on the move on the lap 25 restart, sliding past Bacon in turn one for the second position as Bacon faded into a distant third. Meanwhile, Courtney had gapped Thomas and Bacon to the tune of two seconds until a last lap yellow for a flat left rear tire on Chase Stockon necessitated a yellow flag.

A green-white-checkered finish wasn’t enough to knock Courtney off his game as he utilized a solid restart to distance himself from the pack once and for all, taking the checkered by a 1.299 sec. margin over Thomas, Bacon, Chris Windom and C.J. Leary, whose fifth place finish secured himself a USAC AMSOIL National Sprint Car driver championship.

**Justin Grant flipped on lap 25 of the feature.