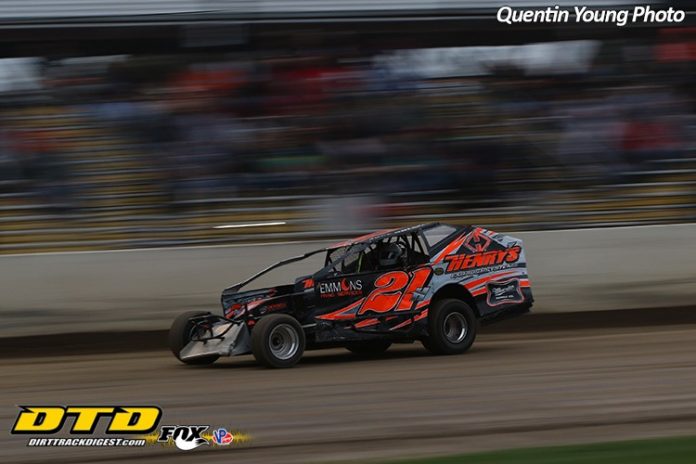 Henry raced part time the past couple years in the Sportsmen division at Fulton and Brewerton, but that team is taking the step up to the small-block Modifieds when the new year comes around.

Henry stated to Dirt Track Digest, “‘I’ll be competing back in the Modifieds on a weekly basis at Fulton next year driving for Mike Holmes in the 21H. We will be racing for points there and will also hit a few specials sprinkled in.”

He has been around racing for quite some time and said, “I grew up around my father drag racing. I wanted to race so my dad bought be a quarter midget and I had some success there. When I was 16 we went Sportsman racing. I really feel we were pretty successful there and decided to go small-block.

“We also dabbled in some big-block racing. It has been three years since we last ran our own car which was an open small-block which lasted one race. We bought it out of Canada and it blew up the first time out so that was the end of that.”

Henry moved away from racing for a while, but was still involved with his business.

He explained, “My exhaust business kept on getting busier and busier, and with no help, I didn’t have the time required to work on the race car.” However, he found his way back to the sport recently, commenting,  “Over the last couple few years I have driven for five or six different people in Sportsman as I really wasn’t looking for a ride, but it just came about that I was asked and driving is what I love to do so I said yes.”

Continuing he said, “We won a couple of races doing it on a limited time business and Mike Holmes, who’ve I’ve known through racing for 18 years  and drove his cars years back, had something going. He bought a Sportsman for his son and he decided he didn’t want to race so I started driving that.”

He also hopped in Josh Livingston’s 10 and even captured a feature win at Fulton this past year.

However, Holmes and Henry decided to continue together.

Looking at the program, Bob said, “We knew we needed to upgrade equipment to compete at a level that we expected to so we bought a 2018 Bicknell with five races on it and the car came out nice. I had all the stuff to build a 358 that will be basically brand new and Mike has always dreamed of Modified racing. I feel Modified suits my stile of driving anyway and I was fortunate enough to have a 358, big-block and open small-block wins in the past. My father, being semi retired at 75, is doing the new engine for Mike.”

He added,  “We are going to run Fulton weekly with a few specials sprinkled in. The car is going to be raced out of my shop with Josh Livingston, who I drove the 10j for last year, with Mike and myself maintaining it.”

What does he hope to accomplish?

Bob said, “As far as expectations, I just plan on being competitive on a weekly basis.  With some luck I could win a feature and that would be nice. I think with my experience in Modified racing and the equipment I have under me, it isn’t far fetched.”

Holmes Racing and Henry’s Exhaust are on the car, but Bob mentioned, “We don’t have any sponsors, but the money being invested by Mike. We would welcome any sponsors that would want to get involved.”