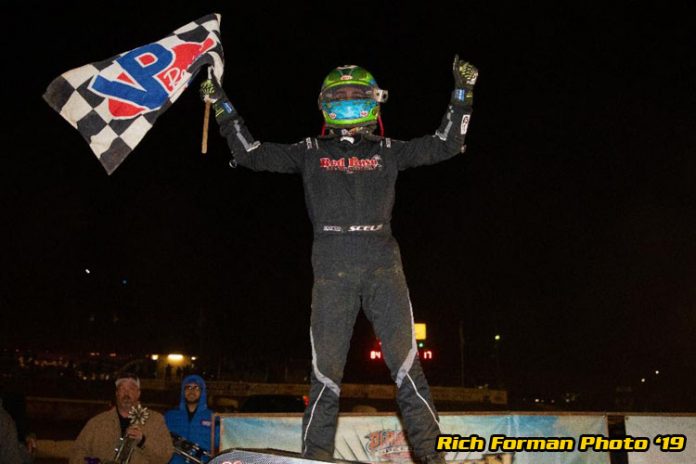 PLACERVILLE, CA – It was easy to see the strides Gio Scelzi had made in his recent outings aboard a USAC NOS Energy Drink National Midget.

Just last weekend, the Fresno, Calif. native broke into the top-10 for the first time with the series in his fifth start, a ninth-place finish, and admitted that it’s a different kind racing than he’s used to and that it will take time to compete with the best drivers of this discipline.

In his sixth start Tuesday night at California’s Placerville Speedway, Scelzi took a giant step up in his midget game, leading all 30 laps en route to victory on night one of the Elk Grove Ford Hangtown 100 in the series debut at the 1/4-mile dirt oval.

It was just four races ago that Scelzi assumed the seat of the potent Tucker-Boat Motorsports/PristineAuction.com – K & C Drywall/Spike/Speedway Toyota that had been a front runner on the USAC Midget trail for the past four seasons with Chad Boat at the controls before he stepped out of the seat and into the role of mechanic and car owner.

It appears Scelzi had finally found the comfort zone in a midget, joining Cannon McIntosh, Chris Windom, Jason McDougal and Tanner Carrick to become the fifth first-time USAC NOS Energy Drink National Midget winner of 2019, the most in a single season since 2008 when there were six. Scelzi also became the 14th different series winner of the season, the most in a year since that same 2008 season.

“It’s pretty humbling to run just a handful of these races and win,” Scelzi said. “It’s taken awhile to get comfortable in these cars and I’m still not very comfortable.”

Scelzi is used to being ahead of the curve. At the age of 17, he’s already become the youngest sprint car winner in the history of the World of Outlaws, Williams Grove Speedway and Knoxville Raceway. Two years ago, in 2017, he became the youngest winner in King of the West/NARC history right at Placerville.

Scelzi seemed at home right from the start as he took control from the onset of the feature event from his outside front row starting position. Meanwhile, nearing midway, a two-pack of Keith Kunz/Curb-Agajanian pilots, Jesse Colwell and eighth-starting Logan Seavey tussled for second as Scelzi held strong up front.

On a lap 14 restart, Seavey was in a hurry to get things done as he hounded Colwell, trying everything in the book to get a run on Colwell to no avail until lap 19 when Seavey slipped by his teammate for the runner-up spot with full intentions now set on reeling Scelzi in. Seavey sought avenues high, low and middle to find his way by Scelzi, but the son of the four-time NHRA champ was smooth as silk on the top side.

A number of cautions slowed the activity down the stretch, including a four-car incident that found Cannon McIntosh tipped on his side on the 21st lap. Following the incident, Scelzi blitzed away from Seavey on the ensuing restart to construct a half-straightaway lead of more than eight-tenths of a second with a surefire victory within his grasp until Michael Pickens’ car came to a rest backwards in turn one.

In turn, that bunched up the field and allowed Seavey, a driver with a year’s worth of past sprint car racing experience at Placerville under his belt, a few more shots at the race leader. Three perfect laps were all that it was going to take for Scelzi to defeat the 2018 series champ.

Seavey tried with all his might a slider into the first turn on Scelzi without success but found a diamond in the rough in turn three. Seavey drove it high to the top of three, then turned down toward the bottom of turn four to “diamond” the corner and gain ground on Scelzi to help propel him past in turn one.

“I was kind of searching all race,” Seavey admitted. “I started on the top, then went to the bottom in one and two. I kind of found that the diamond off four was good. I just tried everything I could, but I think I needed a little bit of a longer run there. Our cars normally get better and better as they go. We never really got a run longer than three or four laps.”

On the 30th and final circuit, Seavey fired his last Bullet by Spike in the chamber toward Scelzi, coming up short, and allowing Scelzi to break away for good to score a 0.647 second victory over Seavey, Colwell, KSE Racing Products Hard Charger Kyle Larson (from 23rd) with Shane Golobic rounding out the top-five.

“Track position was big for me,” Scelzi explained. “Seavey’s really good and all the guys behind me were really good. I made so many mistakes off four, I saw someone on the bottom and I just didn’t know where to go. I just tried to keep doing what I was doing.”

Though Seavey came up just a tad short in the winner’s column, he leads the overall Hangtown 100 standings heading into Wednesday’s $20,000-to-win finale at Placerville, which also pays $12,000 to the driver who accumulates the most points over the two nights. For Seavey, Tuesday’s run was just setting up for Wednesday.

“Overall, a good night,” Seavey said. “I would’ve loved to win this thing, but at the end of the day, this race is about tomorrow and that’s our goal.”