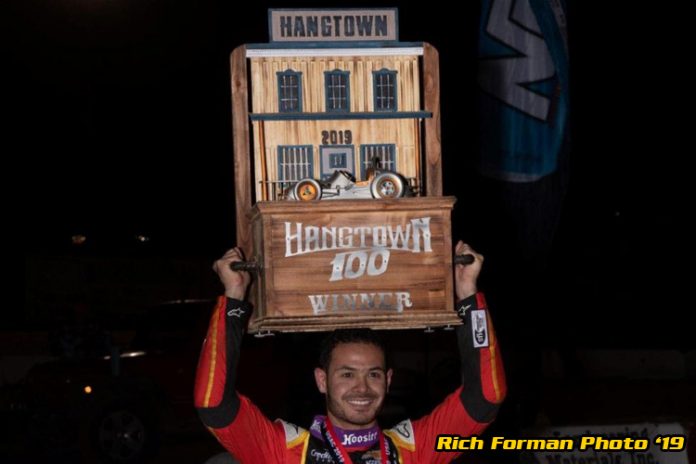 PLACERVILLE, CA – Placerville Speedway is the home to some of Kyle Larson’s most cherished racing moments.

Now, he can chalk up another memorable moment at the northern California 1/4-mile dirt oval and lay claim as the winner of the richest event in USAC NOS Energy Drink National and Western States Midget history, earning $20,000 for the 100-lap feature victory and an extra $12,000 bonus as the overall points champion of the inaugural Elk Grove Ford Hangtown 100 for a whopping $32,000 in total earnings for the evening.

Larson’s 17th career USAC NOS Energy Drink National Midget win moved into a tie for 37th all-time with Jay Drake and J.J. Yeley, but this was the first in his own Kyle Larson Open Wheel/Lucas Oil – iRacing – Finley Farms/King/Speedway Toyota after winning 15 of his previous 16 for the Keith Kunz Motorsports/Curb-Agajanian team between 2011 June of 2019.

It’s a car he shook down in a pair of midget events at Placerville earlier this season, both of which he was victorious in. Wednesday night was just the beginning in one way, but also the culmination of what he and crew chief Paul Silva had their goals set on with the creation of the team to best a field of 56 other determined individuals.

“Paul put a lot of work into this car throughout the last handful of months,” Larson explained. “We ran out here a couple times and the car counts haven’t been big, so I didn’t know how good we were. But I think we proved that we were really, really good, and good in the slick, which was nice.”

Larson started 10th in the 28-car field and instantly became a factor, charging to 7th on the initial lap, then into the top-five by the second go-around. Meanwhile, up front, Brady Bacon jetted out to the early lead for the first two circuits before two-time and defending Ollie’s Bargain Outlet All Star Circuit of Champions titlist Aaron Reutzel blitzed to the lead with a turn three slider on the third lap, making waves in just his second career series start.

On lap five, the first incident of the feature occurred when provisional starter Zeb Wise got upside down in turn one. Damage was minimal and the 2019 BC39 champ ultimately returned to finish 24th.

Tanner Carrick made moves on the 12th lap to slip past Bacon for second and began to close in on leader Reutzel. Carrick’s KKM teammate Logan Seavey was on a mission to supplant Bacon from third two laps later, then by Carrick for second on the 17th lap and Reutzel on lap 18 for the lead by utilizing the diamond maneuver from the top of turn three to drive by Reutzel off the bottom of turn four.

A hectic sequence saw Carrick rip second away again, this time from Reutzel, off turn two before finally squeezing by on the bottom for the spot off the fourth turn on lap 20. Seavey amassed control at the head of the field after starting all the way back on the outside of the sixth row and opened up a sizable near one-second advantage a quarter of the way through.

Larson, who was passed early on by Seavey, regained his perspicacity and began trotting a methodical course toward the front, first picking off Reutzel for third on the 24th lap, then snuck under Carrick for second at the exit of turn two within the eye of traffic.

On the 30th lap, Seavey went wide over the cushion between turns three and four. Larson feasted at the opportunity and drastically closed in on Seavey as the two scythed under, between and around the tail end of the field. On the 35th lap, Larson was there to swoop in under Seavey on the bottom of turn three. The two smacked sidewalls at the entrance of turn three and Larson ably ducked under to lead at the stripe with a third of the race in the archives.

Seavey remained within earshot of Larson until the 40th lap when he nearly parked it in between turns one and two, losing three positions in the process and allowing Ricky Stenhouse, Jr. into second before he, himself, dropped out on lap 43.

A hellacious 42-lap green flag run came to a halt when series Rookie Jesse Colwell spun to a stop at the top of turns one and two, thus erasing Larson’s 4.318 second lead prior to a lap 50 red flag, where several teams took the opportunity to refuel and readjust for a second half run.

Right off the bat, when racing resumed, a melee ensued between turns three and four with September Placerville World of Outlaws winner and fourth-running Shane Golobic and Rico Abreu contacting each other in the third turn, causing both to flip. Early leaders Seavey and Reutzel were stacked deep on the bottom along with 2019 WoO champ Brad Sweet and 2017 USAC Midget champion Spencer Bayston.

Reutzel’s turn of luck took continued on the 52nd lap when he toppled over in turn two but restarted and finished 12th. Kevin Thomas, Jr., took a nasty tumble off turn two following contact with another car. Thomas walked to the ambulance under his own power following the incident.

The storyline of the latter 50 laps was simply the domination displayed by Larson right from the start of the second half when he set the fastest overall lap of the race on lap 51. In fact, his seven fastest laps of the race came in rapid succession between laps 51-57. All the while, everybody else was trying to play catchup with Larson, battling it out amongst themselves for second as Larson slipped into the distance.

Over the final 25-lap sprint, Bell and Carrick swapped the second position five different times before Bell prevailed, albeit a staggering 8.152 seconds behind Larson at the checkered. Carrick took home third while hard-charging Ryan Bernal took fourth after starting 19th, his best run with the series since a 5th place, 16 laps-led run in the most recent 100-lapper in 2012 at Haubstadt, Ind. USAC Triple Crown champ Jerry Coons, Jr. rounded out the top-five.

Interestingly, it’s the fifth time that Larson and Bell have finished first and second in a USAC National Midget feature. However, Wednesday at Placerville marked the first occasion in which Larson got the upper hand with a win. Bell won the previous four at Putnamville, Ind. and Kokomo, Ind. in 2013, plus each of the last two years at Ventura, Calif. in 2017 and 2018.