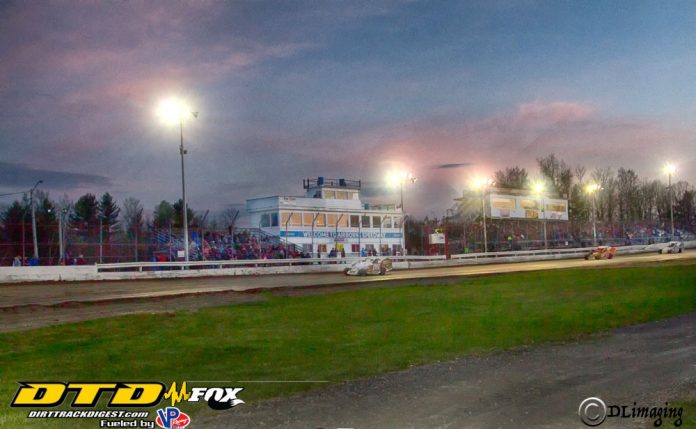 The unexpected news of the possible closing of the Plattsburgh Airborne Speedway was announced this past weekend at the annual awards banquet.

The news of the track is up for sale came at the end of this season awards banquet. Current promoter Robby Knowles broke the news to a studded audience explaining that current owners Jamie Atkins and Steve Fuller are moving in different directions in life and business. It was also confirmed by Robby that unless a buyer is found over the next weeks and months, the track would not be open for racing in 2020.

It would be a real shame if the Northeast loses one more of its iconic tracks to changing times. We can only hope someone will see the true potential this speedway can have if only given a chance. Many over this past season expressed that this was one of the best seasons in recent memory and could not see how this could be the end of this fabulous facility.

On a more positive note, it has been confirmed that Shane Pecore will be moving up into the 358 Modified division for 2020.

Pecore who captured both track championships at Cornwall Motor Speedway and Mohawk International Raceway brings a wealth of experience with him and will be a tough competitor in the 2020 campaign. Shane along with his dad, Marcel, had been in talks with Steve Morris of TAS Racing for a number of months now. The deal between them was confirmed this past week and both sides are now preparing for what is surely going to be an exciting time for all involved. Shane also confirms that Cornwall will be his home track for 2020 and will only be racing one night a week.

The other exciting news is Dylan Evoy will be returning to racing full time in 2020. As with Shane Pecore, Dylan will be moving up to the 358 division, something he and his dad have been talking about for some time now. After a two-year sabbatical during the building of his home, Dylan decided it was time to get back in the game.

“I am very excited to be back racing in 2020. We will release further details in the coming weeks of our plans for next season,” explained Dylan.

Winning numerous championships over the years, Dylan, as like Pecore, brings a tremendous amount of experience with him and should be a contender at whatever track they decide to call home.