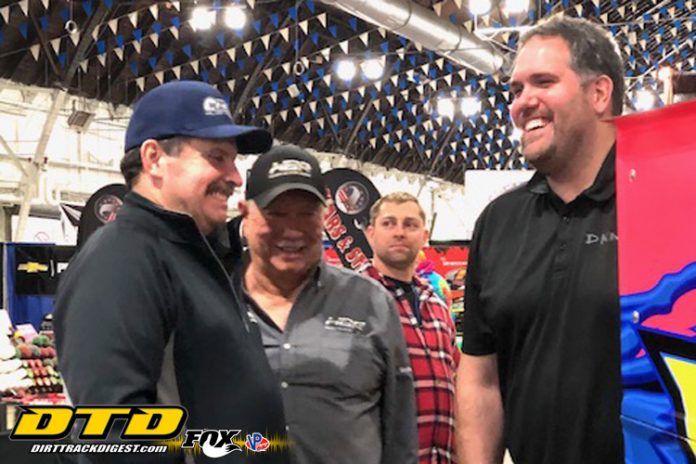 The annual DIRTcar Night of Champions honored its 2019 stars on Saturday night in Liverpool. On Friday and Saturday this past weekend, racers from all over the Northeast and Canada descended on the NYS Fairgrounds for the Northeast Racing Products Auction and Trade Show.

We spoke with Brian Berger who was a regular at both Albany-Saratoga and Lebanon Valley in 2019 and plans to do the same in 2020. He currently is waiting for delivery of two new Bicknell chassis. He says that dealing with Randy Williamson is very easy and he’s thankful for all the help that’s offered to him throughout the years. Brian is hoping for a few more top five’s in 2020.

We ran into the Tremont family while they were sitting down for a bite to eat. Kenny says he doesn’t see much change coming for him in the 2020 season. He and son, Montgomery are still looking over the racer that was involved in a late season crash. Kenny’s dad, Ken, Sr., will be honored in February by the Living Legends of Auto Racing in Daytona Beach during Speed Weeks 2020. He will receive the Saturday Night Hero Award at the 28th Annual banquet on February 12 at the Shores Resort and Spa in Daytona Beach Shores, Fl.

In speaking with our nephew, Kyle Hoffman in the DKM Fabrication booth, he said they were happy with what they were able to do and the possible customers that were contacted during the show. We snapped a shot of a couple of legends in the DKM booth, Jimmy Horton and Gary Balough; Horton has two DKM’s coming for his racing in 2020. We spoke with Adam McAuliffe who will be moving up to Modifieds in 2020 and he has a new car owner. Adam will be behind the wheel of one of Laudy Hoyenga’s DKM Modifieds this coming season. Adam has been racing in the Sportsman division at Fonda and has10 wins and has several wins at other tracks throughout the Northeast. His Hoyenga teammate, Dave Constantino also came out of the Sportsman ranks at Fonda and recorded his first Modified win last season. We ran into someone we hadn’t seen in many years although we had heard his voice at the DIRTcar Nationals in Florida. Todd Morey grew up as a fan at Fonda where he also became one of the announcers at the track during the Ric Lucia era and also Super DIRT Week before moving away from the area. He now drives Monster Trucks on the All American Monster Truck Tour where he and his wife, Kelli travel all over the United States with the show. Todd is also part of the promotion team for FMG live event productions that brings all sorts of motorsports and thrill shows to fans around the world. The brochure states that

“FMG Events, plans, manages and executes over 200 live motorsports shows at venues throughout the globe.”

Todd was at the Northeast show enlisting area venues for shows during the 2020 season. He said he had quite a few very good prospects and looked forward to returning to the Northeast this coming summer from his home in Florida.

The DIRTcar Night of Champions is always a great night of celebration for all of DIRTcar racing and Saturday stayed true to form and so did MC for the night, Shane Andrews, the voice of Northeast DIRTcar racing. Shane was his normal easy going self that put everyone he interviewed at ease with his humor. Two of the young guns on the Super DIRTcar Series Tour this past season were Jack Lehner and Demetrios Drellos who ran the series as two of the 14 “platinum drivers” or drivers that commit to compete at all SDS events during the season. These two are two very personable young men who showed that they are eager to learn from the best by competing side by side at various track throughout the Northeast and Canada. Jack Lehner finished the series 12th in points, Demetrios finished 10th in points and recorded his first SDS win at Albany Saratoga. Both are regular competitors on the Capital District tracks and as drivers like Brett Hearn step away to pursue other endeavors, Jack and Demetrios are the future of the sport. Plans for Demetrios in 2020 will include another run with the SDS and he has not decided where he will run weekly. For Jack, he plans to run part-time at Albany Saratoga and full time on the SDS. Special awards given were the car owner of the year that went to Buzz Chewy and the engine builder of the year went to Billy “Billy the Kid” and Curtis Mathis who supplied the power for the Buzz Chewy car driven by the Champ Mat Williamson.

This weekend Ed will be attending Lost Speedways at the Saratoga Auto Museum, one of the most popular programs during the off season. Dickie Larkin and John Flach, Jr. will be the two drivers participating in the Q&A session and interviews by event organizer, Ron Hedger. Activities will begin at 11 am.

In closing we want to send our condolences to Alton and Carole Palmer on the passing of Alton’s mother this past week.