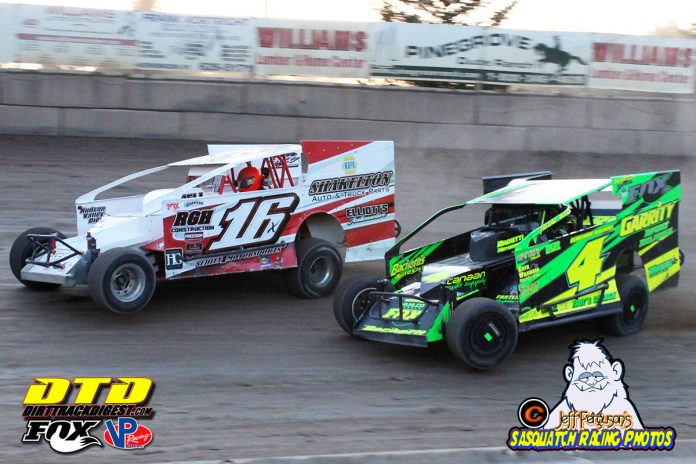 ACCORD, NY – Andy Bachetti went back for a second helping in the 2019 edition of the ‘Gobbler’ at the Accord Speedway.

The Sheffield, Mass., driver dominated Saturday’s 50-lap feature for his second consecutive victory in the season ending event at the quarter-mile.  Bachetti won the race the last time it was run back in 2017 after Mother Nature claimed the 2018 edition.

He now joins Anthony Perrego as the only two-time winner of the annual Northeast outdoor Modified finale.  Bachetti took home a healthy $5,000 for his efforts.

“I think we had a little bit better car in the beginning,” mentioned Bachetti.  “I don’t know about the end there.  It was a good race car tonight.  I’m glad we came, that’s for sure.  This is a win for my father.  He’s struggling, having a tough time right now, but he’s getting there and this win is for him.”

After a half-field pileup on the initial lap, Danny Creeden took the lead at the start of the main with Corey Cormier slotting in behind. Using a rash of early yellows to his advantage, Bachetti quickly moved forward from his seventh starting spot, clawing by Cormier for second in the opening laps.

On a lap six restart, Bachetti launched off the bottom to steal the lead from Creeden.

Yellows kept Bachetti in check, but after a lap 13 restart, the field got some green flag laps strung together. This allowed Bachetti to flex his muscle, putting two seconds between himself and Creeden while he was under fire from Cormier.

One more yellow on lap 21 let Creeden line up alongside Bachetti, and Bachetti picked the bottom for the restart.

Bachetti chose the bottom for all restarts to this point, as he took the lead using the bottom on a restart earlier. However, Creeden fired well up high and grabbed the top spot. Just as Creeden cleared Bachetti, the yellow waived and the pass was nullified. Bachetti chose the top the following restart, and held the lead with no contest.

“I might have made a mistake there,” commented Bachetti afterwards with a smile.

Like before, Bachetti pulled away from Creeden, gapping him again by two seconds by halfway. Track regulars Joe Judge and Jimmy Wells were making hay, with Judge getting by Cormier for third, and Wells slipping under Perrego to get into the top five from 14th.

Eventually, Wells got to fourth and put heavy pressure on Judge, who in turn was all over Creeden. While the battle for second through fifth raged, Bachetti was motoring away.

With ten to go, Bachetti was catching some faster traffic, but had a comfortable advantage over Creeden and company. Even through this traffic, Bachetti was able to keep the gap constant, on cruise control as Creeden fought to keep Judge at bay.

After 50 laps, Bachetti crossed under the final checkered flag of the season as victor with Creeden second.  Creeden was happy to end his season on a high note.  He wished things hadn’t been called back on the early restart due to caution.

“I can’t believe he gave me the bottom, then he changed it,” stated Creeden.  “Luckily, for him, the yellow came right back out.  Andy is great to race with.  He races clean.  We race clean.  Second place is nothing to hang our heads about.  We’ll take it and rebuild from there.”

Judge nearly stole second from Creeden at the line before finishing third.  His car was getting improving as the laps clicked off.

“Being the little guy, it feels really good to come home in the top three,” cited Judge.  “The car was definitely good.  It was coming in better and better.  I really can’t wait for next year.”

Wells finished in fourth with Perrego completing the top five

Grant Hilfiger earned the win in the 30-lap Sportsman portion of the ‘Gobbler’ to put an exclamation point on the season.  Hilfiger, coming off his first Orange County Fair Speedway title, dominated the race leading a majority of the laps to pocket $1,500.

“This is pretty cool,” stated Hilfiger.  “We won our opener at Orange County and now we won our final one at Accord.  How cool is it Gary Palmer puts on this race and gives us a chance to make the off-season shorter?  We are going to head down to Florida and race with (Brett) Deyo, so this makes it really short for us.”

The race got off to a rocky start when pole-sitter Jared Miller spinning in turn two.  Hilfiger, who started third, just missed the melee that collected six cars.  By virtue of the incident, Hilfiger inherited the pole position for the restart.  Hilfiger used that to use advantage as he won the race through turns one and two.

Once in front, Hilfiger survived several early cautions and restarts to maintain of the lead.  Each time he was up the task keeping the entire field at bay.

At the midway point, Hilfiger felt pressure for the first time from eighth starting Jimmy Johnson.  Johnson stayed up to his bumper taking multiple looks on the bottom, each time Hilfiger’s No. 78 was stronger on the top of the race track.

One last caution set up a dash for the finish on lap 25.  Like he had been throughout the day, Hilfiger wasn’t to be stopped.  He stayed at the front over the final few laps to take the win.

Johnson crossed the line in second with Brandon McGill finishing in third.  Kyle Rohner worked his way from the consolation up to finish fourth with Matt Shultz completing the top five.

At the start of the 25-lap main-event for the Street Stocks, Tom Cilurso Jr., outraced Walt Henry to lead early.  Henry battled hard taking the lead back on third circuit on the bottom of turns one and two.  Two laps later Henry surrendered the lead as fourth starting Greg Sleight snuck by to grab the top position.

A red flag was necessary on lap 11 as Cilurso clipped the backstretch wall and got over.  He walked away unhurt.  Under the stoppage, Sleight was unable to get his car to refire handing the lead back to Henry.  Henry went on to lead from that point forward for the $500 victory.  Joey Scheffold finished second followed by 2019 champion John Hechinger in third.  Emerson Cargain Jr., finished fourth with Steven Kanuk in fifth.

George Barringer put in a dominate run in the 50-lap Enduro to score the win.

Gobbler Gravy: A strong field of cars filled the pit area in every division with 28 Modifieds, 29 Sportsman, 21 Street Stocks and 38 Enduro cars signing in for a total of 116 for the sixth running of the ‘Gobbler’…

It was a tough afternoon for former ‘Gobbler’ winner Danny Johnson.  Johnson was involved in multiple incidents during the Modified featuring placing him 13th in the final rundown…

Defending Sportsman winner Kyle Rohner was forced to run the consolation event just to make the feature.  Rohner worked his way up through the field 21st starting spot for a fourth in the Sportsman 30-lap main…

Santa Claus once again made an appearance at the ‘Gobbler’ handing out candy canes and Gobbler stickers to youngsters in attendance as holiday music filled the air early in the afternoon….

Accord Speedway would like to thank all the race teams and fans that came out to support the 2019 edition of the ‘Gobbler.’  We hope everyone has a safe and wonderful holiday season and we’ll see you all in 2020. 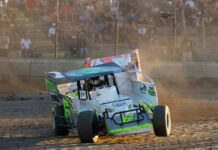