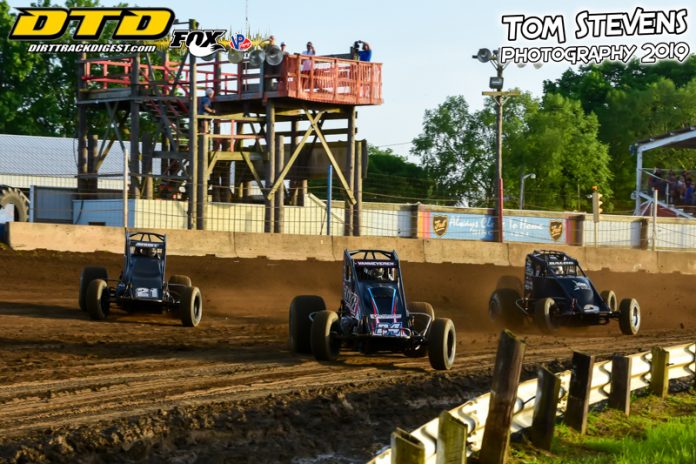 The 2020 ISW schedule includes seven distinct tracks with a rich history and unique characteristics each their own, ranging from quarter-miles to three-eighths to half-miles, with degrees of banking both flat and high throughout the mini-series, offering a unique challenge to both driver and machine throughout a rigorous week of racing.

“Indiana Sprint Week has been an annual cornerstone of USAC’s summer schedule for the past quarter century and we look forward to continue building upon its great legacy as we enter the decade of the 2020s,” USAC series coordinator Levi Jones said.

For the eighth time overall, and first time since 2016, Gas City I-69 Speedway will host the ISW opener on Friday, July 24. The quarter mile has previously hosted the ISW opener in 2002 and each year between 2011-16. From there, the series travels due west the following day, Saturday, July 25, to the quarter-mile Kokomo Speedway, whose ISW origins date to the inaugural year of 1988. The first weekend concludes Sunday, July 26. in the southeastern part of the state at the high-banked, 3/8-mile of Lawrenceburg Speedway.

After a two-day hiatus, the series returns for a final four-day stretch beginning at the famed half-mile Terre Haute Action Track on Wednesday, July 29. Then, it’s off to the world’s fastest 5/16-mile, Lincoln Park Speedway in Putnamville on Thursday, July 30. Working southbound and down, the quarter-mile red clay of Bloomington Speedway hosts ISW for the 33rd consecutive year on Friday, July 31 and concludes with the ISW finale Saturday, August 1 at Tri-State Speedway in Haubstadt, the first time ISW will have reached into the month of August since 1993.

Indiana Sprint Week debuted in 1988, but first became USAC-sanctioned in 1996. Since then, the event has grown from a single weekend to seven races over a week-and-a-half span and has become one of the marquee events, and most sought after tickets, on the USAC AMSOIL National Sprint Car schedule that draws massive crowds and welcomes travelers from around the world, both driver and fan alike.