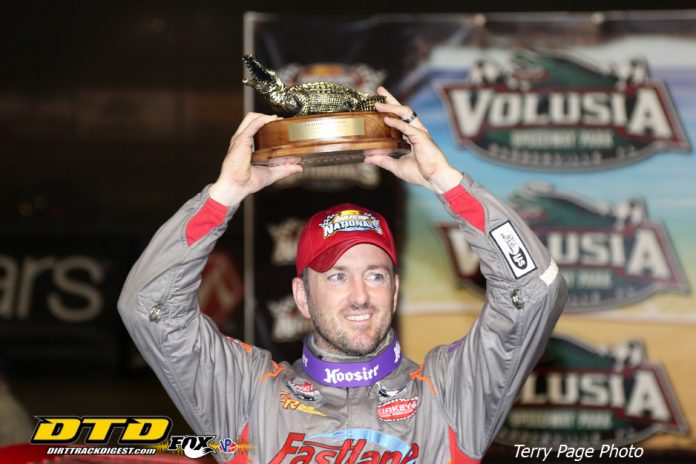 WATERTOWN, NY – Fresh off a strong runner-up finish in the final 2019 version of the Lucas Oil Late Model Dirt Series point standings, Tim McCreadie announced today that he will return to the ultra-popular national touring series in 2020. However, Tim will aim for the National Championship wheeling the Longhorn House Car with a new team owned by Donald and Gena Bradsher of Burlington, North Carolina. The new partnership is set to hit the track first in 2020 during “Speedweeks” in Georgia and Florida with Lucas Oil Late Model Dirt Series-sanctioned events at Golden Isles Speedway near Brunswick, Georgia, East Bay Raceway Park in Gibsonton, Florida, and All-Tech Raceway in Ellisville, Florida from January 31-February 9.

“First off, I have to thank Ann and Carl Myers, Vic Coffey, and Sweeteners Plus for everything they have done for my racing career since 2002,” said McCreadie, who will actually kick off his 2020 campaign in the annual ‘Chili Bowl Midget Nationals’ from January 13-18 in a Jim Neuman entry. “It was a very successful partnership and we were able to win a lot of big races and championships together. While I still have a great relationship with them, I’m excited about this new chapter in my racing career driving for Donald and Gena (Bradsher).”

“They are both great people and do things in a first-class manner,” the popular driver known as T-Mac went on to say. “As a driver, all you can ask for is to have the equipment, the manpower, and the resources available to compete at the highest level possible and there is no doubt that the Bradsher’s are putting together that caliber of a team. I’m ready to get back to racing and hopefully it will be a big year for us in 2020!”

The new-look team will have their #39 Longhorn House Car in the Bilstein booth during next week’s Performance Racing Industry (PRI) trade show in downtown Indianapolis, Indiana. While there is room for additional marketing partners, Mega Plumbing of the Carolinas, Mega Electrical Services, Bilstein, Rumley Engineering, Longhorn Chassis, Cornett Racing Engines, VP Racing Fuels, and Maxima Racing Oil have closely aligned themselves with the Bradsher-backed team in 2020. A full list of partners, including a long list of valued product supporters, will be released in advance of the season lid lifter on January 31 at Golden Isles (GA) Speedway.

“I’m pumped up about our new endeavor in putting this partnership together with Tim McCreadie and Longhorn Chassis,” commented Donald Bradsher via telephone recently. “Both Gena and I are very passionate about racing and make no mistake about it, we want to win a Lucas Oil Late Model Dirt Series title. Tim is one of the best wheelmen in this sport and bringing back crew chief Philip Snellen, along with the expertise of Kevin Rumley, we hope to build off what they accomplished in a strong 2019 season and raise the bar even higher for 2020.”

A key piece to the new partnership is the full and unwavering support of Longhorn Chassis. In 2020, Tim will be driving the House Car for the Trinity, North Carolina chassis manufacturer for the fourth straight season. In the previous three years, the combination has led to six Lucas Oil Late Model Dirt Series victories including the 2017 ‘Silver Dollar Nationals’ for $53,000 at I-80 (NE) Speedway, the 2017 ‘North/South 100’ for $50,000 at Florence (KY) Speedway, and the 2017 ‘Bad Boy 98’ for $20,000 at Batesville (AR) Motor Speedway. In addition, Tim steered the Longhorn House Car to an impressive ‘World 100’ triumph in 2018 at the famed Eldora (OH) Speedway for a $51,000 payday, while the Watertown, New York superstar has finished second in the final Lucas Oil Late Model Dirt Series point standings two out of the last three years (2017 & 2019).

“We are thrilled to have Tim (McCreadie) back in our house car for 2020 and the new partnership with Donald and Gena Bradsher has everyone at Longhorn reenergized for next year,” quoted Longhorn’s Justin Labonte. “Ann and Carl Myers, along with Sweeteners Plus, were tremendous to work with and their support of Tim and dirt track racing in general is undeniable. With that being said, the Bradsher’s are awesome people to deal with and I think everything is aligning for the #39 team to have a terrific season. We have some new things that we are going to test extensively leading up to Speedweeks and working so closely with talented people like McCreadie, Rumley, and Bradsher will no doubt help every one of our Longhorn Chassis customers.”

The latest news and information on Tim McCreadie can be found 24 hours a day / 7 days a week online at www.TimMcCreadie39.com. A new website will be in the works as soon as all details concerning the new Bradsher-backed team are finalized!