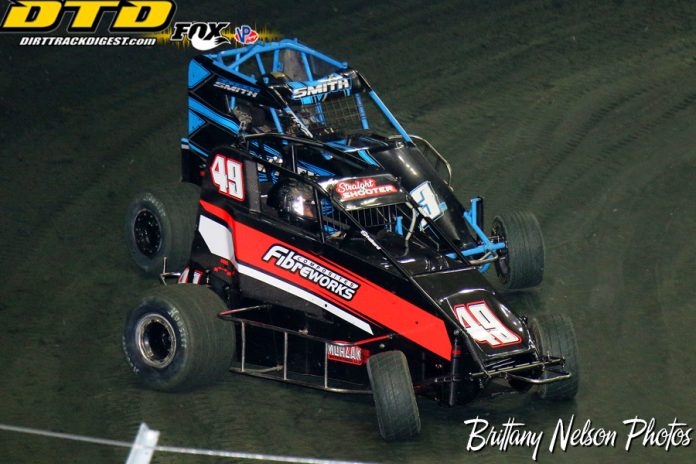 COWLESVILLE, NY – 2019 Canadian Sprint Car Nationals Champion Scott Kreutter will take on the prestigious Chili Bowl Nationals in Tulsa, Oklahoma. Kreutter and long-time car owner Trey Hoddick have secured Nitro 54 Variety as a primary sponsor for a chance to win the ultimate indoor dirt track title. That’s all in addition to a full indoor racing season in the THR TQ Midget and the 600 Micro dirt car in Trenton, NJ.

The wily, bullring-loving, Western New York sprint car driver is eager to test his mettle against the best of the best in the dirt track racing world.

“I have been wanting to do the Chili Bowl for a while. Trey Hoddick found a car and it has a Speedway Toyota and a Spike Chassis,” said Kreutter.

Last year, the car was run by Paul Neiheiser at the Chili Bowl. Neiheiser finished ninth on a preliminary night and was leading the C-Main Saturday when the throttle linkage broke. Knowing he has a solid car underneath him with a great team, Kreutter is confident he can make some noise in his first Chili Bowl.

Kreutter secured a partnership with Nitro 54 Variety, an Ontario cigarette company, after befriending Nitro 54’s owner while racing at Ohsweken Speedway. The familiar THR black and red will be replaced with an all-new black and yellow Nitro 54 wrap.


Fiberworks Composites and Airport Collision are also on board for the Chili Bowl run.

“It’s the best drivers. It’s the most prestigious race. When you listen to Christopher Bell, Kyle Larson, and Rico Abreu, they say it’s the only place that gives them chills when they show up,” Kreutter noted.

The 34th annual Chili Bowl Nationals take placeJanuary 13-18, 2020 in Tulsa Oklahoma. Tickets are hard to come by but race fans can live stream the race and catch the final night live on MAVTV.

Aside from the Chili Bowl, Kreutter and Hoddick have their sites set on TC Cup in the TQ Midget. The first race in that series takes place in Allentown, PA at the PPL Center January 3-4. Round two is the famous “Gambler” in Atlantic City.

The NAPA Know How Atlantic City indoor Midget Car Race falls on January 31 and February 1 at the famous and historic Boardwalk Hall in Atlantic City, NJ. The final round for the TQ Midgets takes place on March 13-14 at the New York State Fairgrounds in a brand new, state-of-the-art facility in Syracuse, NY.

Kreutter talked about what goes into preparing for the indoor TQ season: “You gotta make your car a battle bot. You gotta make sure everything is perfect. Make sure there’s no stress cracks in anything. We’ve got a good set up. We know we’ll be fast. It’s a matter of survival.”

And that’s not all. THR and Scott Kreutter will take their Chili Bowl experience to the East Coast Indoor Dirt Nationals February 21-22 in Trenton, NJ in the Cure Insurance Arena.