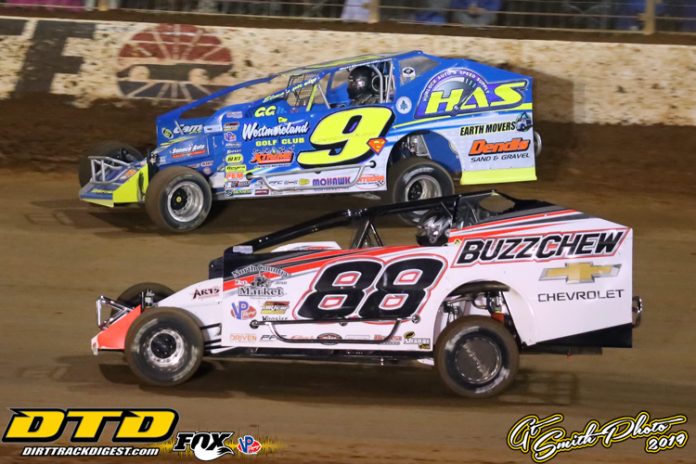 CONCORD, NC — Super DIRTcar Series fans saw one of the greatest all-time championship battles go down to the final night of the 2019 season, culminating in Mat Williamson edging seven-time champ Matt Sheppard for the crown. Today, the Super DIRTcar Series reveals its 2020 schedule, setting the stage for the best Big Block Modified drivers in the country to showcase their brand of wheel-to-wheel racing at the most historic and tradition-filled venues across the Northeast.

There are 30 races on the Super DIRTcar Series schedule with nearly $1.3 million at stake during the season, including eight events where drivers will have a chance to lock themselves into the Billy Whittaker Cars 200 at NAPA Super DIRT Week in October.

One of the biggest additions to the 2020 tour is the return of the legendary $40,000-to-win Eastern States 200 on Sunday, Oct. 25, at Orange County Fair Speedway in Middletown, NY. Also, for the first time ever, the Series will take on New York’s Thunder Mountain Speedway in Center Lisle. Bridgeport Speedway also returns with a $7,500-to-win Feature on the new 3/8-mile version of the famous New Jersey track. Finally, Ontario favorite Ohsweken Speedway is back with a $10,000-to-win, NAPA Super DIRT Week Billy Whittaker Cars 200 Qualifier on July 6.

The points-paying season rumbles to life at Can-Am Speedway with a $7,500-to-win Thunder in the Thousand Islands 100 on Saturday, April 11. The Series will see the newly configured 4/10-mile version of the speedway for the first time, making it anyone’s race.

Weedsport Speedway is a part of the very fabric of short track Big Block Modified racing having hosted Super DIRTcar Series races since 1972. The Series has contested the Central New York oval 68 times and the 2020 schedule will add three more names and numbers to the winner’s list.

The first of Weedsport’s three races is the Heroes Remembered 100 on Memorial Day, May 25. Then, on Sunday, July 26, $10,000 and a guaranteed NAPA Super DIRT Week berth will go to the winner of the annual Hall of Fame 100. Finally, on Monday, Sept. 12, Weedsport hosts a mega-event, which will also award more than $10,000 to the winner and a Billy Whittaker Cars 200 starting position.

Tuesday, June 23, marks the first NAPA Super DIRT Week Billy Whittaker Cars 200 qualifier of 2020. A guaranteed start and $10,000 are on the line at Albany-Saratoga Speedway in Brett Hearn’s The Big Show XII. Later in the season, the fan-favorite Malta, NY, track hosts a second Billy Whittaker Cars qualifier on Saturday, Sept. 26. The Battle at Toga pays out $10,000 to the winner, as well.

The high-banked bullring of Cornwall Motor Speedway follows on Sunday, June 28. The quarter-mile has seen 25 Series races in its history with Brett Hearn carrying the most wins with five. Eight-time champ Sheppard is on a three-race win streak going into 2020’s O’Canada 100.

The next day, Monday, June 29, the Series rolls up to another bullring, Le RPM Speedway in Quebec. The $7,500-to-win battle royale on the quarter-mile dirt oval is sure to thrill Canadian and road-tripping American fans.

Land of Legends Raceway in Canandaigua, NY, is set for a huge year on the Super DIRTcar Series tour. The historic track, and weekly home of Sheppard, Rudolph and more, has three Super DIRTcar Series races scheduled. On Thursday, July 2, celebrate Independence Day with the Liberty 100. The Series then returns on Thursday, Aug. 13 for the Gerald Haers Memorial and a second $7,500-to-win Feature on the high-speed Finger Lakes New York half-mile. Finally, on Saturday, Sept. 19, a minimum of $10,000 and a NAPA Super DIRT Week guaranteed start are on the line to wrap up the three-race Land of Legends miniseries.

The long-awaited return of the Super DIRTcar Series to Ontario’s Ohsweken Speedway is on Monday, July 6, which is also the 25th Anniversary of their very first racing event. The Series comes back in a big way with a 100-lap Feature to pay $10,000-to-win as well as a guaranteed start at NAPA Super DIRT Week. Chad Brachmann took the first of only two previous races at the 3/8-mile speedway back in 2015. The next day, Tuesday, July 7, the Series rolls back stateside to Niagara County for the Summer Nationals at Ransomville Speedway.

The next stop is another Monday-Tuesday doubleheader, this time in Quebec. On July 20, the big, fast, and exciting Autodrome Granby hosts the Super DIRTcar Series to kick off the Quebec swing. The next day, Tuesday, July 21, is Autodrome Drumond’s turn to pack the stands for Series action.

But the Series returns to Middletown, NY, one more time in 2020 and it’s huge. The $40,000-to-win Eastern States 200, on Sunday, Oct. 25, is officially a Super DIRTcar Series points race once again. Adding another prestigious and historic event to the Series schedule makes the month of October even more special.

Bridgeport Speedway in New Jersey has played host to 18 Super DIRTcar Series races in its illustrious history. The Series returns for the 19th time on Wednesday, July 29 for a $7,500-to-win Feature. Series drivers will have to contend with the best New Jersey and Pennsylvania drivers to come away with a win on the newly configured 4/10ths -mile version of the historic track.

On Tuesday, Aug. 4, the Super DIRTcar Series makes its inaugural visit to New York’s Thunder Mountain Speedway. Thunder Mountain also announced DIRTcar sanctioning for 358 Modifieds and Sportsman Modifieds in 2020. Teams and officials are excited to take on the challenge of a new track for $7,500-to-win.

The Mr. DIRT Track USA is set once again for the giant Lebanon Valley Speedway on Saturday, Sept. 5, and paying $25,500 to the winner plus a guaranteed spot in the NAPA Super DIRT Week field Kenny Tremont Jr. has successfully defended his home territory for the past two years. Can a Series driver invade for a win in 2020?

The next day, Sunday, Sept. 6, the Series rolls to Utica-Rome Speedway. Billy Decker and Brett Hearn each have Series high two wins at the Vernon, NY track. The half-mile is a staple of DIRTcar with weekly 358, Sportsman and Pro Stock sanctioning and the fans looked forward to the annual stop of the big blocks!

The most exciting, prestigious and historic dirt track racing event of the year takes place Oct. 7-11 in Oswego, NY. Dirt will cover Oswego Speedway for the fifth consecutive year for NAPA Super DIRT Week XLIX featuring the $50,000-to-win Billy Whittaker Cars 200 on Sunday, Oct. 11. Williamson took the win in 2019 and propelled himself to the Series championship. Back-to-back wins would cement Williamson’s name in Series history.

The Series’ final trip to Canada is Friday, Oct. 16 for the Northeast Fall Nationals at Brockville Ontario Speedway. Danny Johnson and Decker are locked in a tie for the most Series wins at Brockville with three. Will it be a veteran wheelman who takes The Bullring win or can a young gun like Demetrios Drellos or Jack Lehner ride to victory?

Finally, two Can-Am World Finals Features at The Dirt Track at Charlotte will decide the points for the 2020 championship race. No doubt Williamson will be aiming to create a little more breathing room than last year, but eight-time champion Sheppard and the rest of the field will be eager to write their names in the history book.

With a total winner’s purse alone totaling at least $293,000 plus and a minimum of $500-to-start, it’s no wonder the Super DIRTcar Series is the pinnacle of Big Block Modified racing in the Northeast. Check out the all-new SuperDIRTcarSeries.com for schedule updates, race reports, track info, driver stats and more.