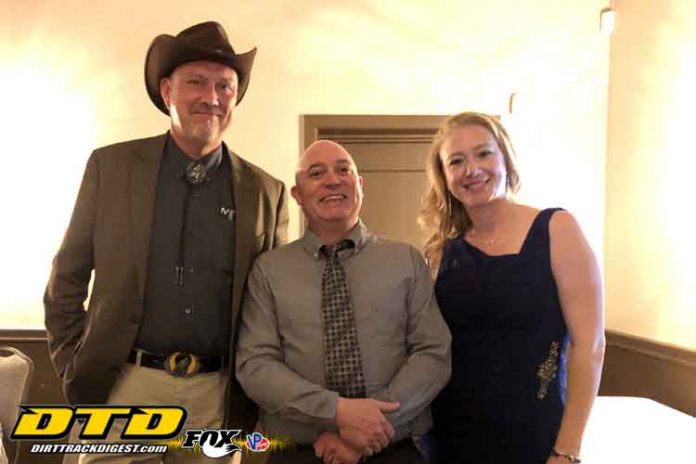 We arrived late to the Fonda banquet on Saturday, due to our granddaughter’s performance in the Nutcracker ballet at Proctor’s in Schenectady so we will need to rely on information from Ron Szczerba and his reliable recap of the nights events. A total of over $50,000 was paid out in point fund money to all six divisions including the Sunoco Modifieds, the Swagger Factory Apparel Crate 602 Sportsman, the Algonkin Motel Pro Stocks, the Montgomery County Office for Aging Limited Sportsman, the Trackside Body Works Street Stocks, and the Four Cylinder Cruisers.

The total of over $50,000 was a combination of the Fonda Speedway 50/50 money and bonus money from American Racer for those who made the top 15 in points overall in the American Racer Cup points. Modified track champion, Rocky Warner was awarded, $10,125 for his first ever Modified track title. We were able to get a shot of Rocky and his racing sons, Corky and Tanner, both on hand Saturday to celebrate and honor the accomplishments of their father and the Spraker Racing Team for 2019. If was the celebration of the first year for BD Motorsports Media, LLC as the promoting team of the historic Montogomery County Fairgrounds oval. Three members of the Fonda Fair Board attended the banquet, Mark Wilmot Vice President, Mary Ellen Wilmot Secretary, and Martin Kelly Treasurer. After years of hearing how difficult the Fair Board was to deal with, it seems that Deyo and team have figured out a way to partner with them for the good of racing; some have even become race fans.


Along with awards for the top performers in points, special awards were given with the Spirit of the Sport award going to Jessica Friesen for her efforts in organizing the Autism Night at the track. Alton Palmer was given the Good Guy award for his willingness to always help other drivers in times when they may be in need of a car or other help. On Dollar Night when Mike Maresca had issues with his car during his heat race, Alton stepped up to loan him their back up car to race so that Maresca’s sponsor St. Lawrence Radiology, who was in the sponsor tower that night could see their car compete. Alton has spent his entire life at Fonda and is always willing to help, he is a car owner, a former driver, and a sponsor.

We did get to talk with some of the attendees that were still at the banquet and one was Kenny Hollenbeck of Sloansville and his brother Kerrie who have been racing at local tracks for many seasons and both usually command the four cylinder class wherever they go. On Saturday Kenny was at the Fonda banquet to accept his award and pick up substantial hardware to boot; a large trophy, a plaque, a large championship photo, a commemorative champagne bottle, and a championship jacket. Ken recorded his 50th win in the four cylinder class at Fonda during the 200 weekend. The team of Angela and Craig Hanson was a huge part of Fonda’s comeback year and their dedication to Fonda Speedway came through every week as Angela handle the weekly office duties for the Deyo organization and on race night was in the pit shack handling line ups and payoffs. Craig stepped up during the season and hopped on the grader many nights for track prep and grooming and more recently has clocked many hours on the total resurfacing of the track.

The 50/50 Ticket sellers attending the banquet included Ivan Joslin, Jaynie Corbitt, Mimi Lazzaro, Dylanne Hodge, Heather Marr, and Julie Compani. This group is a big part of the staff at Fonda and get much of the credit for the money collected over the season and handed out on Saturday.

News from Stewart Friesen of Sprakers and HFR (Halmar Friesen Racing) and their plans for next season in the Gander Mountain NASCAR Truck Series, the team is switching to Toyota with the support of Toyota Racing Development (TRD). HFR has secured a new base of operations in Statesville, N.C. and will purchase trucks through Kyle Busch Motorsports. We spoke Stewart about his plans for next season and he did say there may be something more coming for his 2020 schedule. We will watch for more news from Friesen as the off-season progresses.

We snapped a shot of the announcing team for this past season, Paul, Jay and Melissa who were celebrating Jay’s birthday and a successful season in the tower at Fonda. We already knew that Adam McAuliffe is moving to Modifieds in 2020 behind the wheel of one of Laudy Hoyenga’s Modifieds and now we see that he may be looking at babysitting on his off nights.

We’ve spent time watching the McAuliffe’s race over the years and now we see there is also one in fashion. Here is Kyle and Ed trying to outdo one another.

A big happening on Brett Deyo’s agenda as 2020 begins is the Sunshine Swing that he and his team will make at All-Tech Raceway in Lake City, Florida. Several drivers have already signed on to race the inaugural event and many fans have plans to make the swing too, us included.