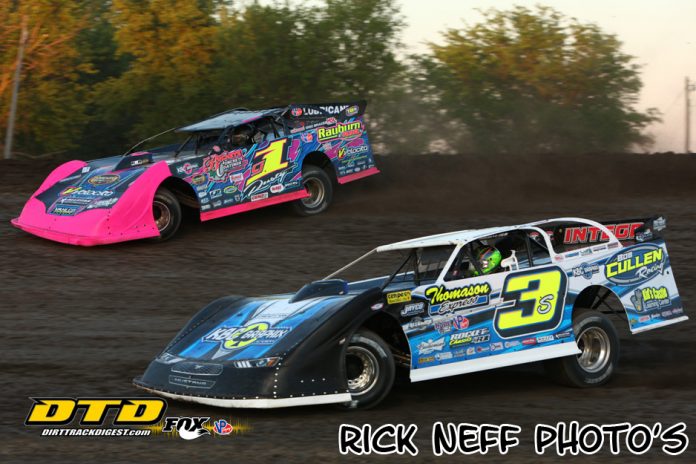 INDIANAPOLIS, IN – The buzz around the DIRTcar Summer Nationals Late Model tour is already getting loud with the release of the 2020 schedule on Thursday at the Performance Racing Industry show.

Twenty-nine races across 33 days and seven states will make up the new schedule, which includes 20 returning tracks from this past year’s schedule.

Friday and Saturday night shows will each pay $10,000 to the winner; the other days of the week will serve as $5,000-to-win shows. Racing will commence six days a week; Mondays are the only pre-scheduled off days.

The race to the $25,000 championship check is once again divided into five sections, each with their own weekly point fund. Kickoff Week begins June 16 with a visit to the Brownstown Speedway in Brownstown, IL, which produced one of the best races seen on the 2019 tour as Mike Marlar picked up his fifth career Summer Nationals victory.

Legends Week action gets underway on June 23 at the Jacksonville Speedway in Jacksonville, IL, and also features a date with Granite City’s Tri-City Speedway on June 26. As one of the most talked-about Feature endings on the tour this past summer, Kyle Bronson swiped the lead (and the win) away from familiar foe Tyler Erb in the final turns after making contact upon corner entry to become the 100th different driver to ever win a Feature in tour history.


Independence Week begins with the only stop in the state of Tennessee on June 30 at Clarksville Speedway. The Summer Nationals tour has not seen the likes of Missouri’s Lake Ozark Speedway in over 11 years, and that will be changing on July 3 when the Late Models roll into the Eldon, Missouri, venue for the first time since 2008.

Challenge Week is scheduled to begin with a race on Tuesday, July 7 and another to follow, both to be announced at a later date. Macon Speedway’s Herald & Review 100 always produces some of the roughest and toughest racing seen all summer, and will be back for its 40th edition on July 9, just one year after St. Charles, MO-native Gordy Gundaker went back-to-back in the 100-lapper this past year.

Finally, Champions Week will wrap-up the points battle and determine a tour champion, starting with a date on July 14 at Plymouth Speedway in Indiana. Three-straight dates in Michigan will follow (Butler Motor Speedway, Thunderbird Speedway, Tri-City Motor Speedway) before things come to a close in Ohio at Oakshade Raceway for the 21st straight year on July 18.

For all of the latest and greatest news about the DIRTcar Summer Nationals Late Models, stay tuned to our website and social channels (Twitter/Facebook @SummerNationals).

The DIRTcar Summit Racing Equipment Modified Nationals schedule was also released on Thursday. While a number of events will run in conjunction with the Summer Nationals tour, the tour itself will kick off a week earlier, June 11-13, at Tyler County Speedway in West Virginia. It will also conclude at the Prairie Dirt Classic on July 31-Aug. 1 at Fairbury Speedway.