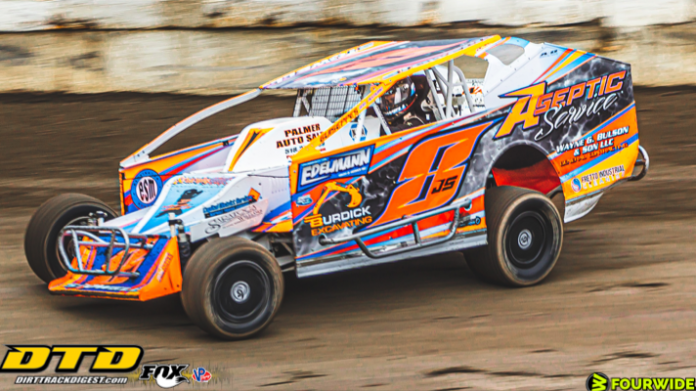 “I just love it at the valley. I love the atmosphere, the fans, the racers,” Stowell said. Stowell, who works as an auto body technician in the Green Mountain State, has been utilizing Teo Pro Car chassis for the duration of his career, and will continue that in 2020, but his program does boast one change; Stowell will be running Dig shocks this season, switching from Fox.

“Brandon Planck at Dig is a great guy. Robbie Albreada with ACR (Dig retailer) will be a big help with what they have learned with LJ Lombardo,” he continued.

Stowell has earned six career victories in limited sportsman competition with five at Albany-Saratoga and one at Fonda. He has also entered races at Fulton speedway, Utica-Rome speedway, Devil’s bowl and Glen Ridge. With three top 10 runs at the valley in 2019, including a third place run, Stowell is optimistic about 2020. Finishing 12th in the standings for 2019, Stowell acknowledges room for improvement in 2020 as he suffered two DNFs in the rain-shortened sportsman schedule.

“Steve down at Teo has been a big help, my father and my buddy Chris work real hard in the shop with me. I think we can get this thing in victory lane. The family is incredibly supportive, too. I look up at the tower from staging and I can see my daughter waving to me and looking through the glass, that’s my favorite part.”


Stowell carries some extra motivation for success in the coming season as well. The Teo he pilots belonged to the late Brandon Pitcher of Chatham, who was a great friend of Stowell’s. The stylized “8JS” on the door of his car will bear a small #17 in the middle in memory of the former driver. Pitcher and Stowell met competing in the limited sportsman division at Albany-Saratoga a few years back, they were referred to as “Shake and Bake,” a call-back to their close friendship at the hands of the sport. Keep an eye on the bright #8JS in 2020 as he eyes a title run at the famed Valley of Speed.

“Eight was my football number from high school and back before I had a car I used to root for Ronnie Johnson, he had the “RJ” after the 2, so I decided to put JS with the 8.”

Who has been your biggest racing influence?

“Jason Herrington and Rob Pitcher have been huge influences in racing for me. They got me going and to where I am today.”

Money aside, if you could race any type of car, what would it be?

“I’d stay in the northeast and run a big block or a small block, they are just badass cars.”

What is the best advice you’ve received?

“Well, my uncle Ricky told me ‘if the radiator cap will fit, the rest will follow,’ but seriously, Dad always reminds me “run your own race.”