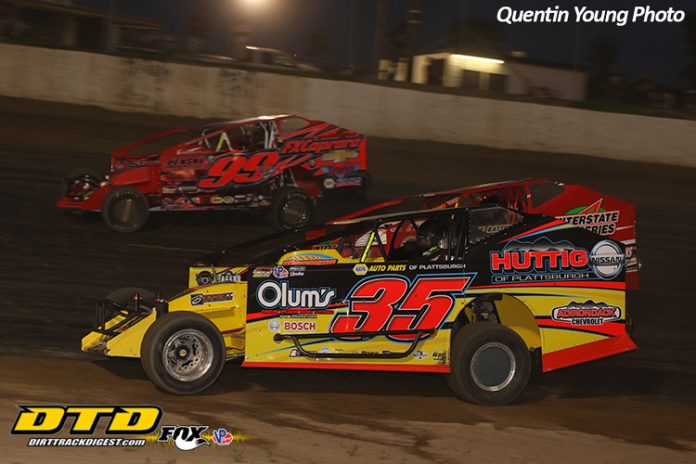 INDIANAPOLIS, IN — 2020 DIRTcar 358 Modified Series schedule was released on Friday at the Performance Racing Industry Trade Show. It includes many fan-favorite events, plus a new exciting two-race Quebec swing.Building off the success of 2019 the Series will once again be a unified tour. The DIRTcar 358 Series championship will include points earned at their weekly home track and points earned at each Series event.

DIRTcar 358 Modified Series standouts like Erick Rudolph, Mike Mahaney, Dave Marcuccilli, Corey Wheeler and more will battle it out wheel-to-wheel across the Northeast and Canada at tracks like Fulton Speedway, Utica-Rome Speedway and Autodrome Drummond, all hotbeds for DIRTcar 358 Modified action.

The season kicks off on Saturday, April 25, at the High Bank Holdup at Fulton Speedway. This highly anticipated event will boast a tremendous car count and incredibly close competition. With Fulton sanctioning 358s in the Hoosier Racing Tire Weekly Championship, the field will be full of local and traveling contenders.

A pair of Sundays and Mondays mark the next four Series races, beginning with a return to Utica-Rome Speedway on Sunday, May 10 in Vernon, NY. 358 star and Utica-Rome regular Rudolph, of Ransomville, NY, took the checkered flag in last year’s edition.

Fast forward to mid-July and the 358 Modified Series heats up starting Sunday, July 12 at quarter-mile Cornwall Motor Speedway, where Canadian, North Country and Central New York favorites will be on hand to contend for the win.


A day later — Monday, July 13 — the Series jumps back across the border stateside to Mohawk Int’l Raceway. Mohawk has been a staple on the 358 Series since its inception in 1993. The legendary Kenny Tremont Jr. took the win at Mohawk in that inaugural season. Series star Dave Marcuccilli took the win there last year on his way to a fourth-place finish in points.

Two weeks later on Monday, July 27, the mighty 358s ride back across the border for a two-race swing through Quebec. The action starts at Autodrome Drummond, where promotor/driver Yan Bussiere will be eager to defend home territory. Following up Drummond, the Series hauls over to Autodrome Granby to take on their local stars on Tuesday, July 28. Danny Johnson won the first 358 Series race at Granby in 2000 in the midst of an incredible eight-race Series winning streak.

The Series returns to action on Friday, Sept. 11 at The Nasty Track, Can-Am Speedway. Can-Am has reconfigured its oval into a 4/10-mile speedway for 2020. This will be the 358 Series first look at the new track. A week later, on Friday, Sept. 18, Mohawk Int’l Raceway hosts its second 358 Series event of the year, making it one of two tracks to double up in 2020.

Thursday, Oct. 8 marks the date of the fan-favorite Hurricane 100 at Brewerton Speedway. The Hurricane 100 has been a staple of the NAPA Super DIRT Week satellite schedule since 2001 when Bob McCreadie drove to Victory Lane. Finally, on Saturday, Oct. 10, the DIRTcar 358 Modified Series’ Salute to the Troops 150 takes the green flag at Oswego Speedway. Billy Decker won $20,000 plus in the 150-lapper, which will be remembered as one of the best in the race’s history.