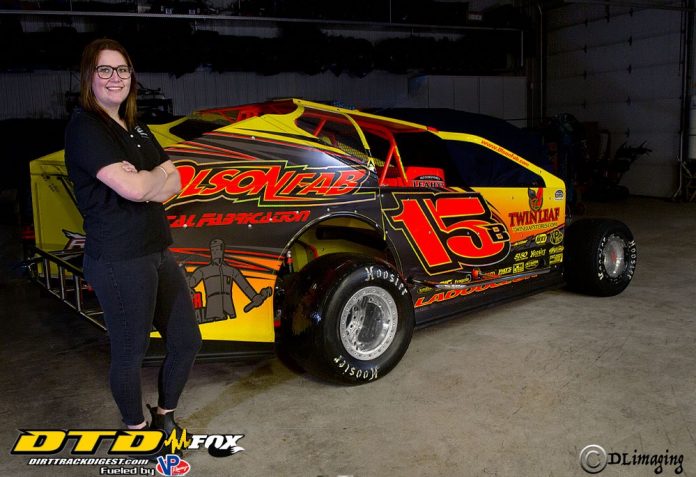 After some time contemplating her options, Brianna Ladouceur has decided to move up into the 358 ranks for the 2020 season. She has always stated that she wanted to progress by taking baby steps for her racing program.

This story begins back in the karting ranks at Cornwall Motor Speedway.  Brianna learned to race at the age of five.  After graduating from the kart ranks, the 2014 season saw a new Sportsman car in the stable.  Brianna had a new spark of excitement as she welcomed the new challenge of competing in the DIRTcar Sportsman class. For the next few years, Brianna, led by her dad Mike Ladouceur, set out to learn with achievable goals. Going from kart racing to DIRTcar Sportsman was a big leap. Guided by her father and Carey Terrance of the Rez X Racing Team, Brianna quickly learned to run in the bigger leagues. Within two years of Brianna’s debut in the Sportsman Modified division, she made history in 2016 by becoming the first woman to win a race at Super DIRT Week.

The 2017 season was not so kind; however, and would test Brianna in defining her future in racing. Many obstacles and injuries weighed heavily on her that year resulting in dismal results on the track. The difficulty in 2017 convinced Mike that they needed to change for 2018 and going to a new chassis might be the way to move the racing program forward.

Brianna explained. “I was hesitant at first, but I am thrilled that my dad convinced me to change the chassis. With my confidence back and a new car, things really started moving forward on the track.

“The first night of the season, we picked up a sixth-place finish. Not bad for the first race in the new car.”

The team saw positive results within weeks by picking up their first win of the 2018 season at the Mohawk International Raceway. The rest of the season continued to unfold positively with Brianna picking up several more wins along with winning the track championship at Mohawk International Raceway while coming home second in points at the Cornwall Motor Speedway where it all began.

“It’s been a long dream of mine to capture a track championship,” explained Brianna.  “With the help of my dad along with Carey Terrance and Dale Planck, I finally achieved my goal,.”

The 2019 season added more to the learning curve for Brianna as the plan was to add some 358-Modified events to her schedule.

Her first big test came during the season opener at the Cornwall Motor Speedway in the Race for the Cure Sportsman Series. Brianna tried to carry on the success of the previous season but fell short, coming home eighth.

Weeks later, the biggest test came at Mohawk International Raceway where Brianna raced in Frenchies Chevy Ford Memorial Cup for 358s, a 50-lap race which tested her skills to the fullest. She also raced that day in the Sportsman feature. It was a tough day of racing with mixed results, but she got a taste of what she was really striving for, racing 358s full time.

For the next several weeks, the team continued to have some dismal results, which was disappointing considering how well they did the previous year.

As the season unfolded, Brianna competed in six 358 events along with her weekly battles at Mohawk and Cornwall. Brianna would finish third in the championship points at the Mohawk International Raceway along and fifth in points at the Cornwall Motor Speedway.

The Fall Nationals at Brockville Ontario Speedway was the last race of the season for the 15B team. By this time, Brianna had decided that this would be her last race in the Sportsman division and that she wanted to race in the 358 class full-time. “I wanted to move up to the Modified division, but at the same time, I had to finish out the Sportsman season as planned,” Brianna said. “I was doing more double duties and the more I drove my Mod the more confidant I felt.

“I told my dad at the Fall Nationals that I thought it was time we moved up.  He was thrilled with my decision. My dad told me multiple times he didn’t mind if we stayed in the Sportsman ranks for one more season. I then explained to him that if we moved up next year, and just focused on Modified, we would learn so much more and that doing double duty races was fiscally tiring.”

It has been six years of hard work and learning the ropes in the Sportsman division for Brianna. Now it’s onto the 358 class, which is very tough.

“Without having the guidance from my dad, along with Carey Terrance of the Rez X Racing Team, I don’t think I would have progressed this far in this short time,” continued Brianna.  “For us, it’s on to some new learning partners and mentors in 2020, but we will also continue to seek help from Carey and Dale who have brought us so far in our racing program.”

The 2020 season will see Brianna under the mentorship of Mike Maresca. The 24-year-old Maresca is coming off one of his best seasons in racing and he is elated after he was approached to mentor Brianna through her transition into the 358 division.

“Mike and Lysa Ladouceur and their team have become great friends over the past years and have been great supporters of mine,” explained Maresca. “I just hope to help Bri in a positive way with things I learned. I can help her out with the style of racing and the way the cars are changing.

“She is already a good racer and knows how to win races along with championships. By showing her what I struggled with for a long time it might shorten the learning process, making it an enjoyable experience.”

As the mentoring process unfolds over the course of the season, Mike explained that for him it will be most gratifying to see her progress through the program even in the bad times as racing isn’t always kind.

“It will be most gratifying to see her do well,” stated Maresca. “Watching her persevere through the bad nights to come back and get a good result. I think she has shown she has the speed already, so it will be a lot of fun racing with her and talking about it afterward. It would be great to see her win a feature this first year.”

For the team 15B team, the season will begin early. There are plans in the works to bring Brianna down south early next season so she can watch and learn everything possible before her regular season gets underway.

“The general plan is to take Brianna south early on the season to get her used to the level of competition and different tires before coming home for the regular season. I hope to get the 15B team in a rhythm and adapting to the style of Modified racing,” explained Mike.

As for Brianna, she is very excited to get on with the job of learning whatever she can with Mike.

“I will travel down with Mike Maresca without my dad so Mike and I can have one-on-one time talking about racing, allowing him to give me tips without my father there, which for me is good. Work my way through the race process on my own is something I need to do if I wish to achieve my goals in the 358 class,” cited Brianna.

Brianna and her dad have been discussing what they should do as a team and what her main goals are for the 2020 season.

“My main goal for 2020 is to get seat time and to do our best. We both know the Modified class is strong with some great racers, so just going out there and learning new things and doing a full season in Mods will be good for us. It would be amazing to achieve a top five at a race, which is a reasonable goal.

“We will also try to make it to all the DIRTcar 358-Modified Series races. We are also thinking of doing some big-block races over the season, and if that goes well, I believe we might head down to Charlotte with the big-block just to cap the season off.”

For Brianna, this will be a new chapter in her life, an exciting one at that.

“I am very excited to start this new chapter in my life with my crew by my side every step of the way!! I am also very excited to have Mike Maresca teaching me what it will take to succeed.”

Whatever 2020 brings for Brianna, no one knows for sure, but the one thing that is certain is that Brianna will always take things one step at a time, leading to success.