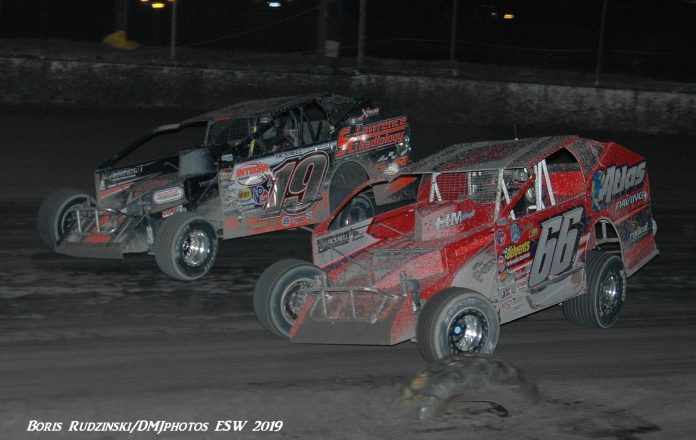 “We actually begin the season on the weekend of March 21-22 with the annual Motorsports Show at the fairgrounds Event Center,” says Brett Hearn, Director of Motorsports. “Then the following week, on March 27 and 28, there are practice days on the speedway allowing teams to test their cars. And fans can watch with free admission to the stands.”

There’s an entire weekend of racing April 18-19. Saturday, April 18 marks the second outing of the Rookie Sportsman. Big-Block Modifieds, Sportsman, and Street Stocks complete the evening’s activities. Then on Sunday, April 19, the Short Track Super Series “Hard Clay Open” under the direction of Brett Deyo returns to Orange County in a popular race meet that combines both Big-Block and Small-Block Modifieds outfitted with sail panels and shod with American Racer tires.


Closing out the month on Saturday, April 25 is another four-division program headlined by the Big-Block Modifieds.

May kickoffs with a new event, the “Cinco de Mayo! $5 Night.” All admissions on May 2 are $5.00, plus there will be drink specials at the famed 31st Lap Tavern. The Rookie Sportsman are back for their third time. They’re joined by the Big-Block Modifieds, Sportsman, and Street Stocks.

Three more Saturday race meets—May 9, 16, and 30 complete the month’s schedule. The Big-Block Modifieds, Sportsman, and Street Stocks are racing all three dates. The Small-Block Modifieds are scheduled May 9 and 30, while the Rookie Sportsman return again on May 16, “Military Appreciation Night.” There is no racing on Saturday, May 23.

Saturday, June 6 marks the highly-anticipated “14th Annual Nostalgia Night, a celebration of the speedway’s rich history of auto racing. This year’s Nostalgia Night also honors long-time Modified competitor and three-time track champion Jimmy Horton. Dozens of past drivers and several of their well-known cars are expected. In addition, the Atlantic Coast Old Timers (ACOT), headed up by former Orange County competitor Keith Majka, will be part of the evening’s festivities. A free commemorative poster for autographs will be available. With an extended intermission for the autograph session, the on-track racing will only include the Big-Block Modified and Sportsman divisions. Paying tribute to Horton, the Modified feature will be 43 laps in distance.

Back by popular demand, the second annual “Orange Crush” is set for Saturday, June 13. There will be an Enduro race, a Demolition Derby, a Bus Race plus thrilling stunts and more. Reserved seating will be available for online purchase prior to the show. Fans are reminded that this program of organized mayhem is expected to be a sellout.

Closing out the month, the Small-Block Modifieds return to action on Saturday, June 27 along with the Big-Block Modifieds, Sportsman, and Street Stocks.

Race fans, mark your calendars! Kicking off the Independence Day Weekend celebration, on Thursday, July 2 for the first time, the USAC Wingless Sprint Cars will race at Orange County Fair Speedway. And that’s not all. Joining the sprint cars, the Big-Block Modifieds will compete in a pair of 50-lap feature races. Then on Sunday, July 5 Orange County’s Independence Day Weekend celebration culminates with the second annual Stampede Rodeo.

The 180th Orange County Fair opens on Thursday, July 23 and runs daily through Sunday, August 2.
Two race meets are schedule during the fair. On Tuesday, July 28, the Super DIRTcar Modified Series returns to Orange County for the Battle of the Midway 100. Dirt racing’s biggest stars face off at dirt racing’s oldest track! The Orange County Sportsman will also be racing as the evening’s support division. Then on Sunday, August 2, the country’s premier national touring series, the World of Outlaws 410 Sprint Cars return to Middletown. Sharing the billing will be the Small-Block Modifieds.

Saturday, August 8 has been designated “Marky Traverse Street Stock Memorial/Full-Fender Nostalgia Night” with the Street Stocks and Sportsman divisions sharing the evening’s racing program. Marky Traverse was a young race fan who was lost much too soon. For years, the Traverse Family, the speedway, and Orange County fans have paid tribute to Marky with a special Street Stock feature race. And beginning last season, the memorial has become a second “Nostalgia Night,” honoring Orange County’s history of “full-body” or “full-fender” race cars. Vintage pro-stock, street stock, and pure stock cars will be on display, with drivers signing autographs and celebrating the stock car era.

Not only is August the hot weather month. But the racing heats up as well. Four race meets remain in the season-long point chase, with the intensity mounting each outing, then climaxing with the final night of points and the track’s Champions Night on Saturday, August 29. At the evening’s conclusion, the new 2020 track champions will be crowned in all four racing divisions—Big-Block Modified, Small-Block Modified, Sportsman, and Street Stock.

On Wednesday, August 19, celebrating Orange County’s second century of racing, it will be “The 101 Summer Championship” for the Big-Block Modifieds. Details to be announced. The Sportsman will be the supporting division.

September at Orange County means Mayhem with a capital M! The carnage returns on Saturday, September 12 with the annual “Eve of Destruction.” Included in the chaos will be an Enduro race, Demolition Derby, trailer race (not to be missed), and other thrilling and chilling motorized stunts. Reserved and General Admission seating will be available for online purchase.

Following the “Eve of Destruction,” the speedway will be quiet until Saturday, October 17. In preparation for the 59th Annual Eastern States Weekend, an open practice is scheduled for all competing divisions. Fans will be admitted free to the grandstands.

The 71st consecutive season of stock car racing at Orange County Fair Speedway concludes with the 59th Annual Eastern States Weekend, October 22-25. In addition to the traditional races, including the Eastern States 200, the oldest consecutively-run championship race for dirt track Modifieds and again part of the Super DIRTcar Modified Series, on Friday, October 23, the Short Track Super Series “Hard Clay Finale” will be the attraction. There will be no restrictions on Sportsman division entries for Eastern States, and all qualifying will take place on Thursday evening.