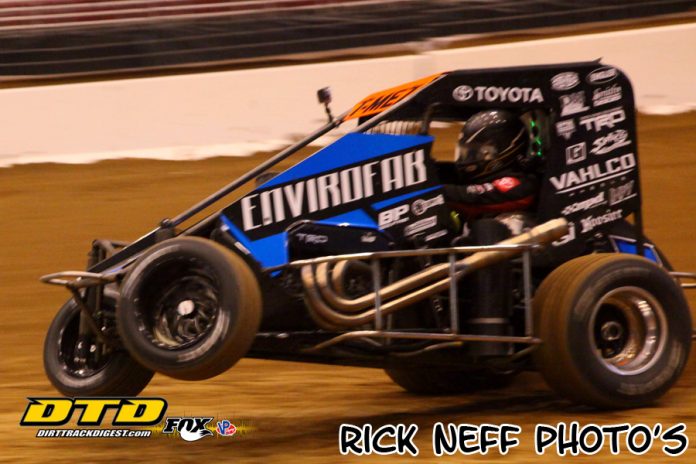 ST. LOUIS, MO – Thomas Meseraull pulled off a late race pass of Justin Grant to open the 2019 portion of the Gateway Dirt Nationals at The Dome at America’s Center for the Midgets.

On the next lap, Meseraull made the move stick this time off of turn two before completing the pass off of turn four as they raced to the checkered for the $3,000 win.

“Sometimes you got to go where they are not,” cited Meseraulll. “It is easy to follow the leader. I dialed on the shocks and put it up on the lip. I think we were about equal. Justin is a bad ass. You are not going to drive around him unless you are better. I think we were better tonight.”

Grant was forced to be happy with a second-place finish. He admitted afterwards he got too conservative near the end of the race.

“It sucks to lose races like that,” stated Grant. “It was a good race. Thomas did a heck of a job. I got a little conservative  the last few laps. It cost me. As it should in Midget racing.”

Blake Hahn hung on to third to snag the final spot in Saturday’s main-event. Chris Windom and Logan Seavey rounded out the top five.