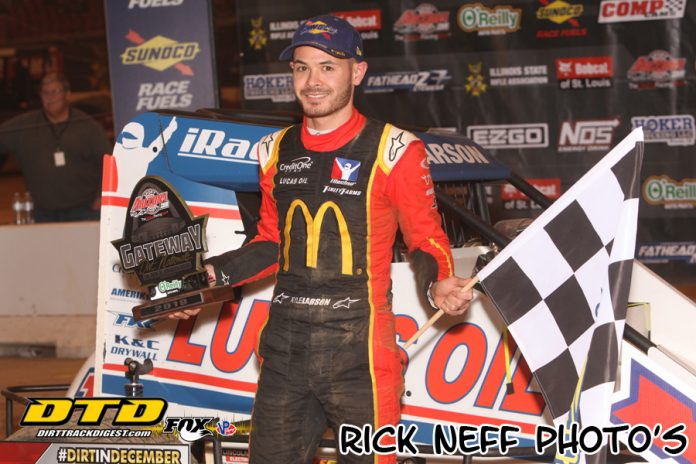 ST. LOUIS, MO – Michael Pickens and Kyle Larson lead the 18 car midget field to the green flag on Friday night, with Pickens jumping out to the early lead in the 20 lap main event.

An early race restart after put Sammy Swindell on the outside of Kyle Larson.  On the restart, Swindell was able to power past the Larson 1k machine and into the 2nd spot.

Larson loses another spot to McIntosh, drops to fourth, 4 laps into the main event.  Larson was able to work his way back by on a restart and began working on the 1 of Sammy Swindell.  As they came to complete lap 5 Kyle Larson made a slide job work on the Sammy Swindell and got himself back to the second position.

Larson then set his sights on the leader Michael Pickens who was making his way towards lapped traffic.  Unfortunately for Swindell he was the cause of the next caution, spinning in turn 2.

On the restart it was pure chaos as they were four wide trying to exit turn two.  With cars scattering it was the 98 of Clinton Boyles and 8J of Jonathan Beason going for wild rides.  Beason was able to restart, but the Boyles machine would be retired for the night.


With 7 laps to go Larson began to put pressure on the Pickens ride.  He attempted a slide job with 4 to go and was able to make it stick coming out of turn 4.  Pickens continued to challenge as they both reached lapped traffic.  As the white flag fell Pickens was directly on the back bumper of the Larson machine but he was unable to mount a challenge as Larson held on for the win in the 20 lap main event.

In victory lane, Larson was critical of his performance.  “I was just doing such a bad job on the restarts, I couldn’t take off” stated Larson, “It would take me a couple of laps to get going.”  When asked about the track conditions, which has been a story this year he didn’t mince words, Larson mentioned “the track was rough and technical, but fun.”

Larson will now focus his attention to tomorrow night’s finale, where the winner will take home $10,000.