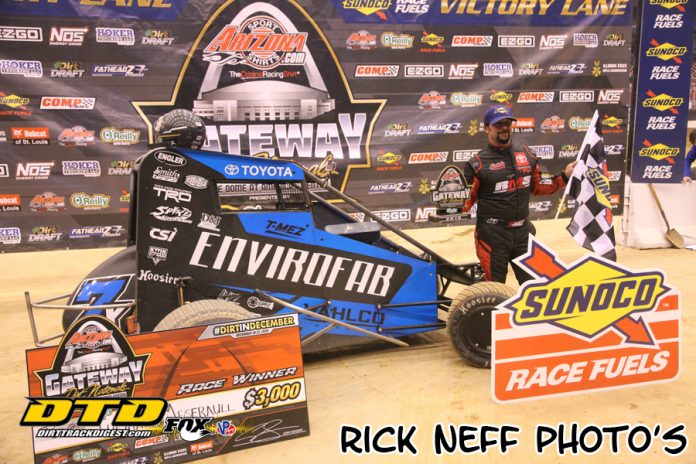 It was the first night if the Gateway Dirt Nationals at the Dome at America’s Center, while it’s considered just a preliminary night for the Midgets, it does set the stage for Saturday’s finale.

Grant jumped out to a quick lead, survived a few yellow’s and red’s that marred the first five laps.  The final 15 however do go right to the checkered flag and while T-Mez (still cool) was “right there.” It didn’t look like the outcome would change.  That was until…. those final two laps.

“I had to get a run on him so I moved up just a bit to try and get any traction I could, it was slick down low, a little choppy up top.  The track had some character,” said Meseraull. “We have our Chili Bowl set up in the car.  It only weighs 800 lbs and it reacts a little different.  We actually tried to play it safe as I am real bad at these point races (you earn total points for your starting spot on Saturday).”

He went on, “When I try to win it, I wear it so I kept telling myself to be smart, be smart. But, I got a run on him and I had to show the door so he could change something. He got a little tight off the corner on one lap and that helped me make a run.”

“I felt like I could run the car into the corners wide open but I kept telling myself ‘no, no, no’.” Thomas noted on his wild passes. “I just didn’t want to turn it over.  When I got that final run off turn four I was like ‘YES!”.

Meseraull is a USAC part-timer, he runs Sprints and Midgets (Ironically that last time these eyes saw him he won at Weedsport in a Sprint).  He knows where victory lane is, he’s done it in double digits this year.  This Dome deal has grown, 3G’s is a nice chunk of change.  But, what does this win mean?

“It seems like a big deal here which is cool.  It’s downtown, at the Dome, it’s all the Late Model guys, all the Modified guys and the heroes in my world, the Midgets,” he went on.  “Running with Grant, Windom, all those guys you like to think you’re on the same level as them and when you do get a win on a stage like this it’s pretty special.”

While it was all smiles for the San Jose dude, it was just a “little” frustrating for the one from Lone, California although he took it in stride.

“I just think I got a little conservative in those final laps and that opened up the door,” Grant said.  “Once he slipped by I got him back, then he got me.  It was fun, I just wish I was the one that made the last pass.”

Grant went on, “We had a good car though, congrats to Thomas.  We are in the final on Saturday and that’s the one we all are shooting for.  I think we will have a good chance.”

In the companion Modified event, Levi Kissinger nipped Derek Losh and Josh Harris to the line to set themselves up for Saturday as well.

GATEWAY NIGHT #1 NOTES:  The pit log was made up of 85 late models, 24 modifieds and 19 midgets.  For the mods and midgets, their fields were split with the second batch on each running on Friday…Fred Carpenter and Shannon Babb were the quickest in their groups for the late models…A total of 12 heats will be run on Friday (6 for each group of cars)  along with C, B and A-Mains for each group….Track crews were busy reworking the surface in-between classes and event actual events to try and stay ahead of it getting choppy.  It still would get a little rough at times which saw a few cars on their lids during the