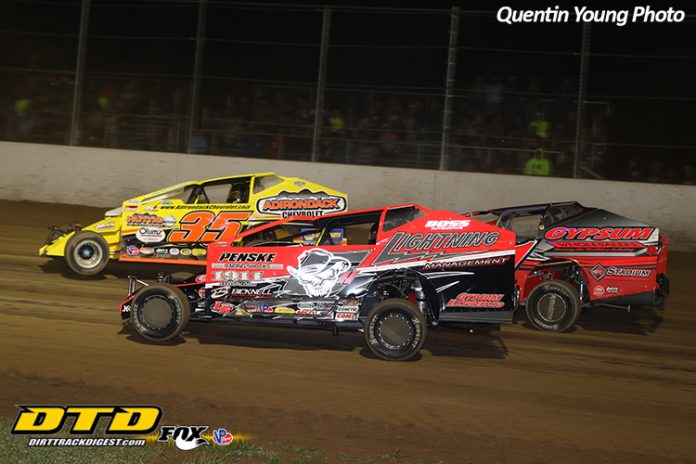 WEEDSPORT, NY – Christmas has arrived early for fans of Weedsport Speedway, as The Port’s full 2020 slate has been released by track officials highlighted by nine premier racing weekends including the all-new ‘Cavalcade Cup Weekend’ on September 11-12.

Aside from the World of Outlaws NOS Energy Drink Sprint Cars moving to a prime summer weekend on Saturday, August 1, the biggest addition to this year’s schedule is the inaugural ‘Cavalcade Cup Weekend’ on Friday, September 11 and Saturday, September 12, featuring six different divisions across two days of action including a Super DIRTcar Series Big Block Modified 100-lap finale.

“We’re very pleased once again with the diversity of this year’s schedule, as well as the opportunity to add a fall weekend event to our calendar,” said Weedsport Speedway Promoter, Jimmy Phelps.  “Weedsport continues to be home to the fastest cars and biggest stars and our 2020 calendar is built to that point.”

The month of May will kick-off the 2020 schedule with a test and tune session on Sunday, May 3 followed by the Super DIRTcar Series ‘Heroes Remembered 100’ on May 25.

Hall of Fame Week at Weedsport will open with the 2020 Dirt Racing Hall of Fame Inductions on Thursday, July 23 followed by the ‘Hall of Fame 100’ on Sunday, July 26 featuring the Super DIRTcar Series Big Block Modifieds as well as the 7th annual Sportsman Classic 75.

Sprint Cars will return to center stage in August as the World of Outlaws NOS Energy Drink Sprint Cars invade Weedsport on August 1, with the ESS Sprint Cars coming to town on Sunday, August 9 for the ‘ESS Legends Reunion’.

Following ‘Cavalcade Cup Weekend’ on September 11-12, the season will draw to a conclusion with the ‘Super DIRT Week Kick-Off Party’ on October 7, highlighted by the DIRTcar 358-Modifieds and the DIRTcar Sportsman Series.

More detailed information will be out in the coming weeks in regards to each of the events listed above.

The official 2020 Weedsport Kartway racing schedule will also be available in the coming weeks.

About Weedsport Speedway: Officially opened for the first time on July 24, 1955 – the Weedsport Speedway 3/8 mile dirt oval has produced a legendary list of drivers and champions including Will Cagle, Danny Johnson, Bob McCreadie, Alan Johnson, Jack Johnson, and Dave Lape to name a few.  In 2018, Weedsport introduced the all-new Weedsport Kartway, just outside of the Speedway’s main pit area, to begin to foster the next generation of racers, crew members and race fans.  Couple the racing with state-of-the-art camping and track amenities, unmatched on-site television production capabilities, plus the ability for large scale concert productions and Weedsport is one of the marquee entertainment venues in the country.

6/14/20 – ‘Thunder on the Erie’ Featuring the USAC National Sprint Car Series, plus the Stirling Lubricants Modified Series and CNY Mod-Lites