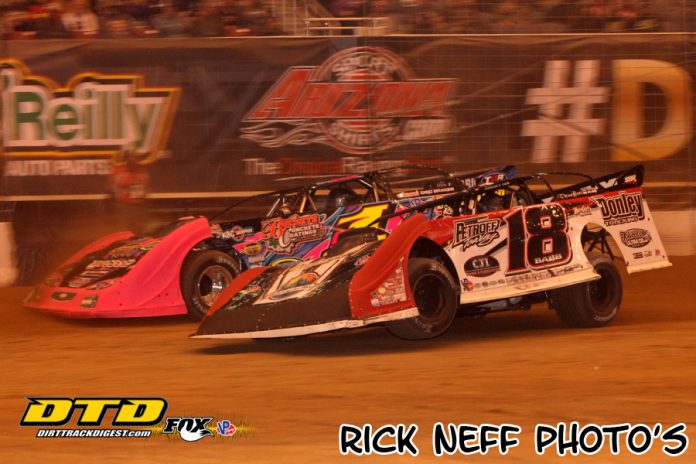 ST. LOUIS, MO – No less than five features, A-Mains, finales were performed at the Dome at America’s Center which capped Friday night for the Fourth Annual Gateway Dirt Nationals.

Kyle Larson, Tyler Carpenter (oh we have to talk about him) and Shannon Babb made the biggest headlines.

For Larson, it was a continuation of collecting checkered flags with his self-owned team with King Chassis built out of New Zealand. The stats read six wins in seven races (five in a row), but the California star had to work for it on this night not taking the lead until just four laps to go.

“I needed some laps to get in a groove and get going, my car just didn’t go on restarts,” he said shortly after collecting the $3,000 top prize.  “Michael (Pickens) was fast and I just had to get going and get close enough so I could try and put a slider on him.”

That slider happened going into turn three on the 15th lap. Once he disposed of Pickens (who by the way runs the same King Chassis) it was just making sure not to make a mistake.

“With slower traffic and the way the track was I just was making sure I didn’t slip up. You never know where Michael is and he’s good in these cars.” Larson went on.  “We have a good feeling going into Saturday, but it’s a good field here, lots of good cars and drivers so we will have to see.”

Oh Tyler Carpenter…Tyler! It was five minutes that so far has stole the show at the Gateway Nats. I’m not going to lie, I didn’t go in the pits afterwards to get some quotes that no one else gets. After his victory lane interview I just said to myself, that’s all that can be said.

I would like to say it was rated G or even PG, I’m sorry, it’s needs to be said like he said it. Children, please turn the sound down. Here were some of the highlights….

“Exciting is an understatement… Look at that Fu##ing crowd!!!” he simply exclaimed. “I have never been at a place like this in front of all you people. And I’m standing in victory lane…I did it!

“I run that damn thing like I wasn’t going to live tomorrow,” he went on in excitement. “If I didn’t go for it someone else would have. I might be damn retarded and I did it!”

“I just can’t believe I made it here! We are the biggest underdog, me and my family beat our brains out,” the West Virginia native went on.  “We just want to be acknowledged that we are somebody that has never been a nobody. Whether you want to believe it or not you’re looking at him.”

Then Tyler quickly turned to something that brings even more emotions out. Tyler’s niece Mannon is going threw Spinal Muscular Dystrophy and there is only one treatment that can help her.

“It’s one of the saddest things a human being can look at, we have this fund raiser called Mannon’s Miracle. It’s sad, you got a two month old baby that’s fighting because of a decline in insurance. This high dollar insurance that everyone has to pay for ain’t worth a shit. Anything can help, small or large. We need to raise 2.2 million for this little girl.”

There is a GoFundMe.com page set up that you can find under Mannon’s Miracle.

An exciting feature filled with some raw emotions after was followed up with a popular win by one of the Late Model favorites Shannon Babb. He also rock and rolled his way to a $5,000 win in a race that only had one caution (as did the first LM feature), to the approval of the folks in the Dome.

“I don’t even know who the hell the guy ahead of me was (Patrick Danial), but he was fast, I was running her hard slamming it against the wall,” Babb said on his 20 laps of excitement. “You just go as hard as you can here until you see the 20 on the scoreboard.”

“I just have to thank Rocket Chassis and so many other people that help me. This is fun here,” said the $5,000 winner.  “Lap cars were tough, they were all over the track and the way the track was you just had to have a little luck. Sometimes you also have to find a different line to get around.”

The Modified feature was won by Mike Harrison over a stout Kyle Bronson and Mike Long. They are locked in the final on Saturday.

GATEWAY NIGHT #2 NOTES: Along with the same 85 late models, 24 Modifieds again and 18 Midgets were in the pits. Reminder or the mods and midgets, their fields were split with the second batch on each running on Friday…A loud roar from the crowd was heard on the first lap of the first heat. Scott Bloomquist blew his motor which left a big puddle of oil in the infield. The motor was changed and as a previous winner, look for him to make the feature on Sat…Sammy Swindell was an early Midget drop out while running third in the A-Main…World of Outlaw Champion Brandon Sheppard is running Donny Schatz’s late model. He took eighth in the first feature…Ricky Stenhouse Jr had a rough night, he only completed 9 laps in the A-Main and will have to run one of Saturday’s last chance races.