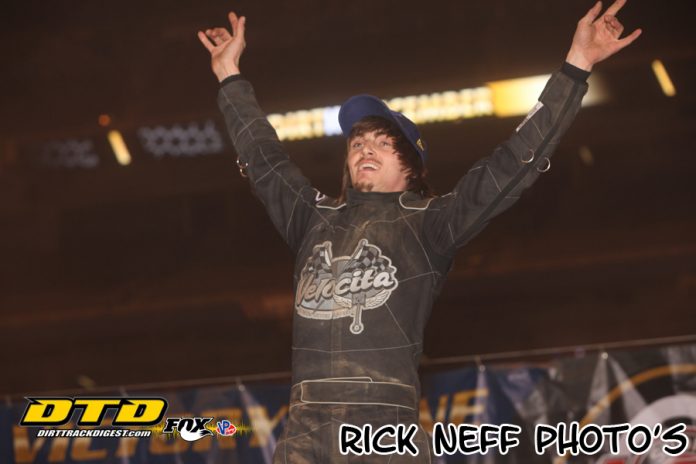 ST. LOUIS, MO – Ryan Unzicker and Billy Moyer lead the field to the green flag, with Unzicker jumping out to the early lead. Moyer put pressure on the 24 machine down the backstretch but it was Unzicker who was able to take hold of the top spot by the completion of lap 1.

Moyer fell back into the clutches of Tyler Capenter, who made a move past “Mr. Smooth” to claim the second spot three laps into the main event.

Carpenter then set his sights on the 24 of Ryan Unzicker with 15 laps to go in the A-main.

One lap later, the 28 of Capenter used a slider to get past the 24 of Unzicker for the lead with only 4 laps to go.  Unzicker held on for second, with Mike Spatola completing the top 3 transfer cars into Saturday’s A-main event.


Carpenter made news earlier in the night when his heat race interview went viral on Social Media after a heat race win, so you can imagine his excitement after taking home the A-main victory.  “Exciting is an understatement, look at this crowd!” Carpenter said, stunned in victory lane.  “I had no idea I’d ever come here to an event like this with all you people, for somebody like me to be in victory lane, I did it!”

Patrik Daniel and Shannon Babb brought the second late model A main to the green flag and it was Daniel who jumped out to the early lead.

Babb dove to the bottom on an early race restart but Daniel was able to hang tough on the outside of the speedway.

With 15 laps to go Babb was putting a lot of pressure on the leader Patrik Daniel as they approached lapped traffic.  With 8 laps complete, Babb took the lead from the 75 of Daniel and set sail through the lapped cars.  From there, Babb was able to successfully navigate the lapped cars and take home the win in the 2nd A-main for the late models.  Rusty Schlenk finished in the runner up spot, with Patrik Daniel holding on for third.

Like Carpenter in the feature before, Shannon Babb had good things to say about the Gateway Dirt Nationals in Victory lane.  “This dome is awesome!” said Babb in victory lane, “It’s been great to me.”