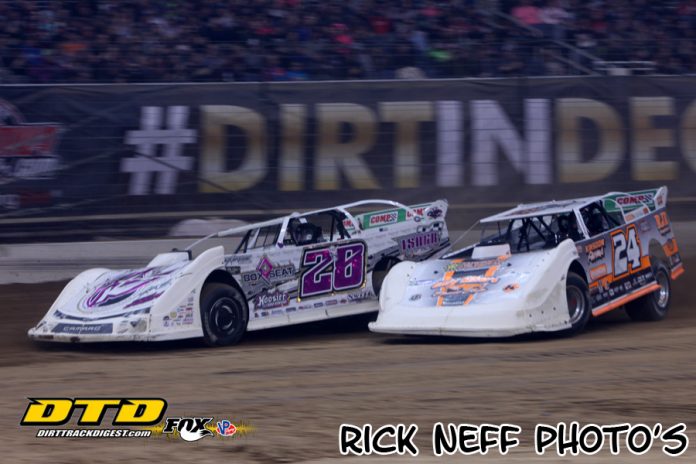 ST. LOUIS, MO – The fairytale continued for Tyler Carpenter on Saturday night at the Gateway Dirt Nationals at The Dome at America’s Center. The West Virginia native held off  Ryan Unzicker before keeping Brandon Sheppard at bay to take home the upset $30,000 win.

“Dreams do come true,” said an elated Carpenter after the feature.

Carpenter started the main from the outside of the second row before taking the lead from Rusty Schlenk on lap nine. Carpenter proceeded to run the race of his life from that point forward.

Carpenter cruised early in the go before Unzicker began applying heavy pressure just past the halfway point. Unzicker took the lead with 10 laps to go as he snuck by on the top of turns three and four.

As he continued to lead heading into turn one a lap later, Unzicker got sideways before flipping. He wasn’t hurt, but this gave the lead back to Carpenter.


Over the final nine laps Carpenter was stalked by Sheppard. Sheppard was relentless in his pursuit. He was all over Carpenter as the race got closer to its conclusion.

On the final lap, Sheppard made one last effort off of turns three and four. He went high then drove off low to dive under Carpenter. Carpenter beat him to the checkered flag by a whisker for the improbable win.

Sheppard settled for second in his Donny Schatz owned No. 15 with Billy Moyer finishing in third. Jonathan Davenport finished in fourth while Gordy Gundaker rounded out the top five.