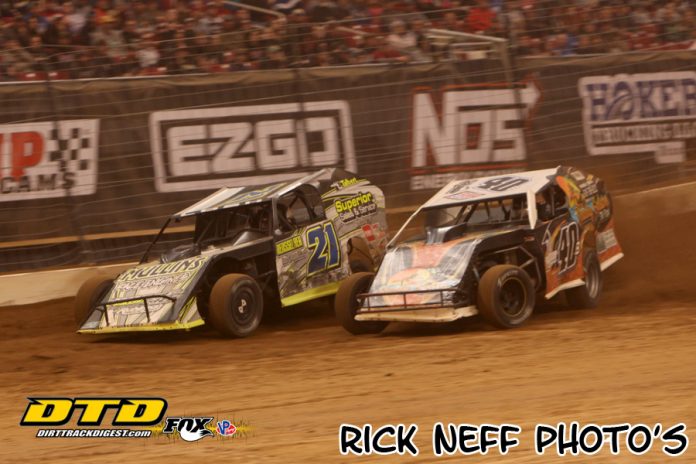 ST. LOUIS, MO – It came down to the proverbial wire on Saturday night in the final event of the 2019 Gateway Dirt Nationals at The Dome at America’s Center. Derek Losh used a last turn, last lap pass to regain the lead in the Modified main event for the $10,000 triumph.

Losh jumped out to the lead at the start of the main-event. He survived a couple of early restarts and held off all comers. That was before Bronson began making his presence felt.

Bronson got to his back bumper at the halfway point of the 30-lap feature. Six laps later he made the move to go by Bronson as Losh bobbled on the top.

Losh battled back hard nearly taking down the wall only to have a caution on lap 26 give him another shot. He made the most of that opportunity.

Losh stayed on Bronson’s back bumper. Losh again went to the wall using it to turn while Bronson worked the middle of the race track.

On the final lap, Losh went to the top then used a crossover move coming off the fourth turn. At the same time Bronson caught a rut causing his car to hop up the track. Losh went by to take the checkered flag by only a few feet.

“I tried to get to his back bumper and fake him out on the top,” said Losh. “I knew he’d try to shut me off up there. I was able to get back by him on the bottom coming back to the line.”