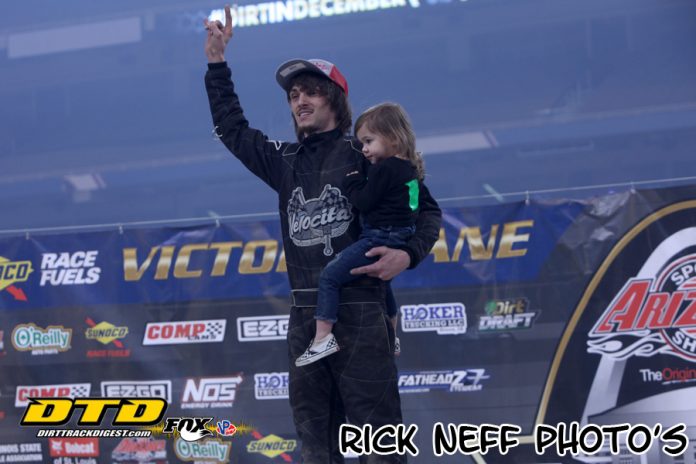 ST LOUIS, MO – Rocky Balboa, whether you feel he’s a fictional character or not, it’s was Sylvester Stallone’s genius work to create the greatest underdog story in sports movie history. After watching it you simply feel good, makes you think all is right in the world after all. And, after 40 plus years, when it comes on your TV at home, more times than not you will stop what you’re doing and watch it again.

When Parkersburg, West Virginia’s Tyler Carpenter climbed from his Kyrptonite Chassied :ate Model Saturday night at the 4th annual Gateway Dirt Nationals in the Dome at St. Louis he shouted “Yo Adrian…I did it!”

Perfect.  That just summed up a story telling three nights of action at the Gateway to the West.

Yes, he walked home with over $37,000, yes, it’s your true underdog story, yes, it’s something that will be talked about in the Late Model world for a while now. It’s all of the above and please excuse the simplicity…it was freaking cool.

After his memorable victory lane interviews with Blake Anderson, then greetings and well wishes from hundreds of folks that he never met, interview with the gang from Dirt on Dirt here I was next (another person he never met). Next to talk to the newest star in our crazy world. Not sure what to ask that hasn’t been already asked but you know what, I just let Tyler Carpenter be, well, Tyler Carpenter.

I noticed when he took the checkered flag that the best of the best was right there. It was a photo finish with a guy named Brandon Sheppard, then there was Moyer, Davenport, Gundaker and more. A slow victory lap ensued and then you noticed everyone of those competitors wanted to drive up and offer their congratulations. Everyone! I might be stretching a bit, but it was sort of Earnhardt-est when he won Daytona.

Heck, even drivers from the infield with broke down or badly battered cars went out to the track and gave Tyler thumbs up.

That’s what I wanted to start with, “That just goes to show you what this sport is, everybody is sports family. Everyone wants to win here, you never know when something like this will end. It just shows how everyone is family,” Tyler went on, “Brandon (Sheppard) has won everything and there we were, I was shoulder checking him, he was shoulder checking me but the bottom line is we are racers and family.”

The Dome is an unique event, it’s almost the WWE of Late Models, “Each and every lap here you look forward to get hittin’ in the left rear but it doesn’t matter. You need to expect it, expect to get hit and expect to give a hit. It’s just going to happen especially moto crossing like that,” as he went on with filled emotions, “You run her for all it’s worth and hope you get it done. I think everyone here knows that and to see them congratulate me that is something special.”

When the checkers did fly and the 40 laps was in the books, the winner actually didn’t know he won…yet.

“All jokes aside, I actually didn’t know the race was over! They were yelling on the radio yellow, yellow. When people started slowing down I was wondering what the heck was going on,” Carpenter was telling laughing, “I went down the backstretch and the first person I seen was Rusty Schlenk and he gave me #1. Rusty is bad ass and that helps make what we did cool.”

When Tyler finally did know he was the winner of the annual event which was approved by some 15,000 literally screaming and cheering, he did one very slow pace lap.

“I was just letting it try to sink in, this is just a dream but I am here to tell you don’t give up, dreams do come true,” here you just let the man speak. “I mean we are not poor but we aren’t a big team either. I am more at home running $1,500 to win shows, we build these cars (Kryptonite) ourselves so it shows that if you work hard, stay dedicated, pray, it can come true.”

One aspect that Tyler said in victory lane that really told a cool story was him saying how he was watching the TV screen.

“Yea I was. I mean with all these people here good luck in seeing two four-inch wide colored sticks, but you sure can see a 300 foot TV screen!” he kept telling on the strategy. “I was seeing where Brandon was and I mean, I was doing all I can to block him. Brandon Shepperd is no joke, he’s the best and I was doing all I could to get him behind me.”

The small, Dome track is what makes him make the nearly nine hour haul.

He is a father of four and has one on the way. However, the story that has caught the attention of many in the racing fraternity is his niece Mannon. She has Spinal Muscular Atrophy and the medical bill to help her out is well into seven digits. While he will make this weekend a memorable one and quite frankly could be the most memorable in his life, Tyler Carpenter is quickly turning his attention to his niece.

A GoFundMe page has been started and as true fashion, the racing family has responded to over $60,000 in three days. Social media has blown up in support. If you search Mannon’s Miracle you will find the page if you want to help.

Three nights in St. Louis. I would say that 99% of the folks that live in the city have no idea what happened in the Dome at America’s Center. That’s ok…we do. Tyler Carpenter enjoy your dream coming true and help your family through the next fight.