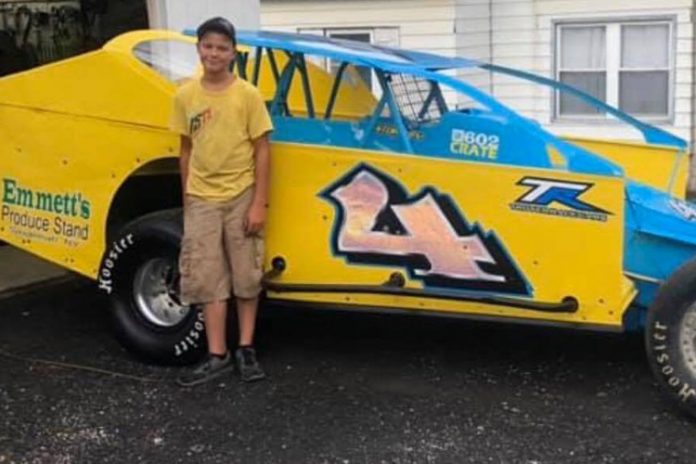 Young drivers in racing is no longer a rarity and 13-year-old Emmett Waldron is one the latest to make an effort to advance in the sport.

This coming season Emmett is planning on running the Sportsman division at the Land of Legends Speedway in Canandaigua as well as stops at the Weedsport Speedway in a ‘13 Troyer.

The Savannah N.Y., eighth grader has lived racing for many years.

In fact, his dad Heath said, “He’s home schooled because of his previous racing schedule.”


Emmett has run USAC Quarter Midgets on asphalt for the last seven years and has over 20 wins, not only locally, but in the Northeast Region. He raced weekly in Syracuse and Fulton as well as traveling to Ohio and Pennsylvania to run indoors in the winter. He was second in regional points and the Fulton track champion in 2015.  In 2017 he raced only for Regional points in New Jersey, Pennsylvania, Connecticut and New York.

The teenager doesn’t simply sit back and watch his dad work on the car.

Emmett noted, “I own and run a vegetable stand and mow lawns as well as plow driveways during the winter to help fund my racing.”

Like everyone involved in racing you need a mentor or a role model and in Emmett’s case it is a pretty good one.

Heath noted, “Emmett currently helps Matt Sheppard weekly in the shop and at the track.”

Like any race team the search is on for sponsors as currently Emmett’s Produce Stand is the lone name on the self-sponsored number four.

So another name is added to the growing list of Sportsman drivers in Central New York and though young he has plenty of seat time, but the transition to dirt will be a challenge.