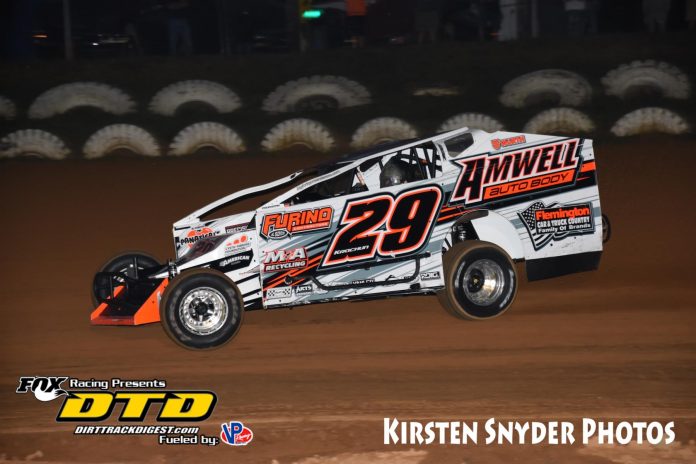 Twenty-one year-old Ryan Krachun is expanding his racing horizons in the 2020 season.

Talking to Dirt Track Digest he said, “We have decided to make the switch to go to Orange County this coming year because I would like to get more big-block seat time as well as learn to race on the New York style race tracks. Middletown is the perfect opportunity to learn how to race on a slick track as well as learn more about coil over suspension.

“I have raced at Orange County a few times with both ups and downs, but my highlight from racing there has to be timing third at the Eastern States 100 before getting a flat with 20 to go while running in the top five.”

Continuing, he said, “Our goal for the season is to mainly learn the New York style race tracks and hopefully have some success at Orange County.”

Ryan will have a solid program behind him as he explained, “We have run TEO Pro Cars since I started racing Modifieds and they have been great to us since the beginning. Recently, we made the switch to Morgantini Racing Engines for my spec small-block and big-blocks while our open small-block is powered by Pro Power Racing Engines. We couldn’t do any of this without the help from great partners like Furino and Sons Contracting, Flemington Car and Truck Country and many more.”

That open small-block will come in handy very early in the 2020 season as Ryan said, “Our first race will kick-off with the Short Track Super Series Sunshine Swing at All-Tech Speedway in Florida, but we are unsure about whether or not we will be able to race at Volusia.”

When asked about his style of driving, Krachun noted, “It’s hard to describe my driving style. However, I’ve always tried to race everybody as clean as I can, but I will race people the way they race me and at the end of the day I am racing for the win.”

Reflecting on his career, he said, “I started off racing Quarter Midgets when I was seven and by the time I was 12 or 13 we moved up to USAC asphalt midgets. I moved into the dirt Modifieds when I was 16 after several different classes including NEMA Midgets, Asphalt Late Models, Super Late Models, Slingshots, Speedsters, Dirt Midgets, Sprint Cars and Indoor TQ Midgets. I’ve won races with USAC Midgets, won the NEMA Midget title in my rookie year. I’ve won multiple Modified races including my second race, being the youngest driver to be approved to run in the State of New Jersey and a few others.”

Ryan talked about influences and explained, “The people who have had the biggest impact on my career have always been my father Mike Krachun and my crew chief Cody Hager. They have been there for me since the beginning and have helped shape me into the driver I am today. Aside from them, I was fortunate enough to have made friends with a lot of top guys who have always been there for me, such as, Rick Laubach, Billy Pauch Jr. and Ryan Godown.”

The Branchburg, N.J., driver hopefully will gain some attention this year and should be a welcome addition to the weekly field at Orange County.