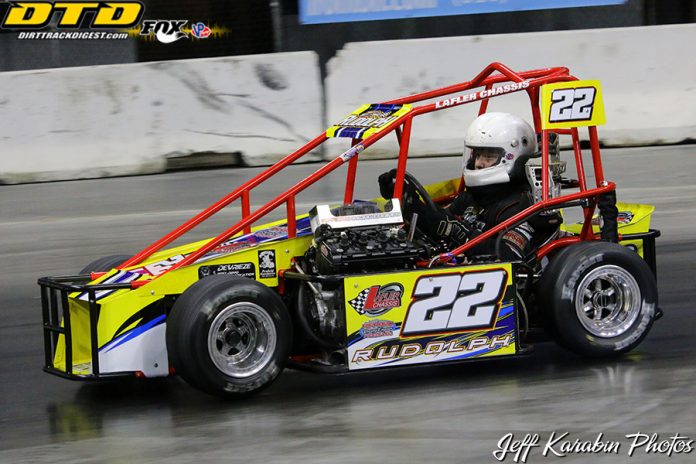 Rudolph won in a car built by Mark Lafler that was fielded with ten inch tires as opposed to the thirteen inch tires all of Lafler’s cars have used previously.

“The smaller tire took a little getting used to,” Rudolph admitted. In fact Rudolph spun on his first lap of time trails but brushed it off to post a sixth fastest time on his second lap.

“The car really didn’t drive that much differently. I was able to make the same kind of passes I was making before,” Rudolph added. Rudolph started fifth

Nye was driving an all new car completed just days earlier by his brother Tim and that TQ was also on ten inch tires.

“I really thought I might win the race,” Nye said. “The problem I was having was with brakes going away. But finishing second to Eric (Rudolph) in an Indoor TQ race with a totally new car is like a win for us.”

Matt Janisch, who had won the Friday Allentown race a year ago, was a solid third at the checkered, ahead of Andy Jankowiak and Jon Reid.

Jankowiak out-qualified 44 other TQ Midget drivers in time trials posting a 7.425 clocking, just ahead of Anthony Sesely at 7.462 and Ryan Flores at 7.512.

Marsden led the first six laps before Doug Stearly took over, pacing the pack up to lap ten. Tuttle then picked up the pace bringing Brown with him.

Brown gained control the race for good on lap 13 with Tuttle settling for second. Mike Perry, who had started 12th, gained several positions in the last five laps to run third with TJ Reed fourth and Marsden fifth.

“You can’t give anybody an inch in these races because if you do, four more guys are going to pass you,” Brown said. “I learned that from racing karts on dirt at Selinsgrove.” Brown shared that this race was the first one he had ever driven on concrete.

Night Two of the Ironton Telephone Indoor Auto Racing Series events at PPL Center in Allentown, PA on Sat., Jan. 4 will feature a second TQ Midget program coupled with the unpredictable Slingshot division. Doors open at 5:00PM with racing beginning at 7:00PM sharp. An on-track Fan Fest is available at no extra charge to ticket holders who chose the option when making ticket purchases.