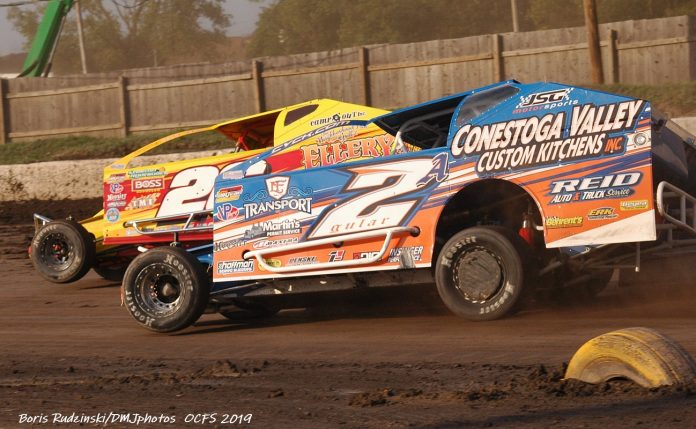 MIDDLETOWN, NY – Every racing meet adds to the glorious history of Orange County Fair Speedway as begins its second century of action on the five-eighths-mile clay speedway in the Town of Wallkill, adjacent to the city of Middletown, New York. This year also marks the beginning of the ninth decade of stock car racing at the speedway, and more specifically, the 71st consecutive year of weekly stock car excitement. (Stock Car races were held in both 1948 and 1949, but not on a weekly basis. Weekly racing began in 1950.)

The previous 70 years saw 28 different drivers win Orange County’s season-long Modified point championships. But 72 trophies were awarded: In 1964, Billy Deskovick and Frankie Schneider tied for the title, and in 2007 Chuck McKee and Jerry Higbie also ended the year with the same number of points. Russ Dodd holds the distinction of being the track’s first champion, out-pointing his rivals in the 1950 inaugural season of weekly racing.

As is the case with career victories, Brett Hearn is the all-time Orange County point champion, having won 16 Modified titles, the latest just this past season. Hearn won his first championship in 1979, in only his second season driving in the Modified division. Others with multiple championships include Will Cagle and Chuck McKee (each with five titles); Jeff Heotzler and Jerry Higbie (four each); Ray Brown, Jimmy Horton, Rich Eurich, and Tommy Meier (three each). Seven drivers have won two Modified point championships, while an even dozen competitors have a single championship trophy to their credit.

The 2020 Orange County schedule includes a total of 22 feature races for the Big-Block Modifieds, with 16 of these dates awarding points towards the division’s championship. The six non-point events includes two Short Track Super Series races, Special Twin-50s during the Independence Weekend Celebration, the Super DIRTcar Modified Series Battle of the Midway 100, and the Eastern States 200.

Applications for Season Tickets can be found on the track website: www.orangecountyfairspeedway.net.