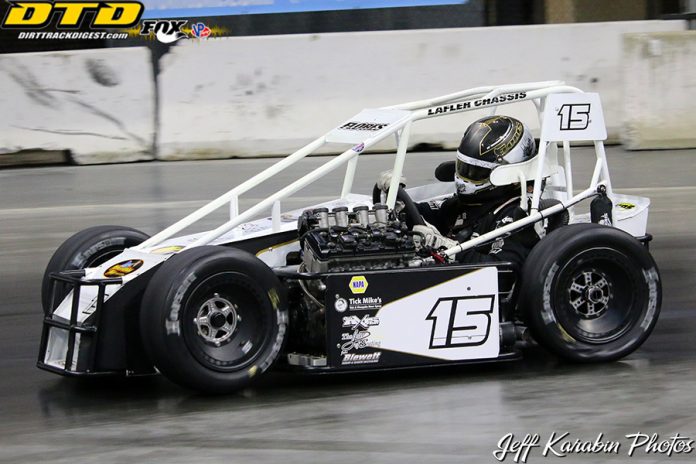 “There were a lot of challenges out there tonight,” Flores said. “But the car was good, good enough to run the last ten laps with a left rear tire that was going down.”

Dylan Hoch of Mertztown, PA, was in the right place at the right time and won the Slingshot 20-lap co-feature.

In the 40-lap TQ Midget main event, pole position starter Andy Jankowiak led the first 30 laps chased by Flores, up from fourth from lap seven on.

Flores gained the lead from Jankowiak on lap 31 with Tim Buckwalter challenging. Buckwalter’s bid ended when he spun, and Bobby Holmes, who had been third, was penalized for over- aggressive driving. With both of those contenders falling back, Steve Kemery, one of only two drivers making the feature field with a 600 Sprint in an otherwise all TQ field, assumed second and finished there ahead of Jeremy Haudricourt, who was making just his fourth career Indoor Auto Racing Series start. Fast timer Anthony Payne bounced back from an early race spin and pit stop to finish fourth and Ryan Bartlett was fifth.

Kyle Lick, Flores, Holmes, and Paules won the four ten lap heat races for the TQ Midgets and Payne along with Pat Bealer won the pair of 12 lap TQ B-Mains.

Slingshot feature winner Hoch, who had started 15th, was running a close second to leader Scott Neary, from ninth, when they and Alex Reinsmith, in third, encountered heavy lapped traffic with seven laps left in the feature.

Hoch zipped by Reinsmith and was catching Neary for the lead when several lapped cars tangled in front of them. Hoch darted to the inside of a slowing Neary, took the lead, then crossed the start-finish line seconds before a caution flag came out for a subsequent tangle.

As the leader of the lap, Hoch restarted with the lead over Neary with the race running its final circuits without further slowdown. Neary was second, Brett Bieber third, Michael Lapicki fourth and Aiden Svanda fifth.

Early arrivals to the PPL Center were treated to a trackside Fan Fest meet and greet session that included a guest appearance by IndyCar star and Nazareth, PA resident Marco Andretti. Andretti ran several hot laps in Kyle Lick’s 600 Sprint and was warmly received by the big crowd.

The BELFOR Concrete Series season finale is on Friday and Saturday March 13th and 14th in a return to the Exposition Center located on the grounds of the New York State Fairgrounds in Syracuse, NY.