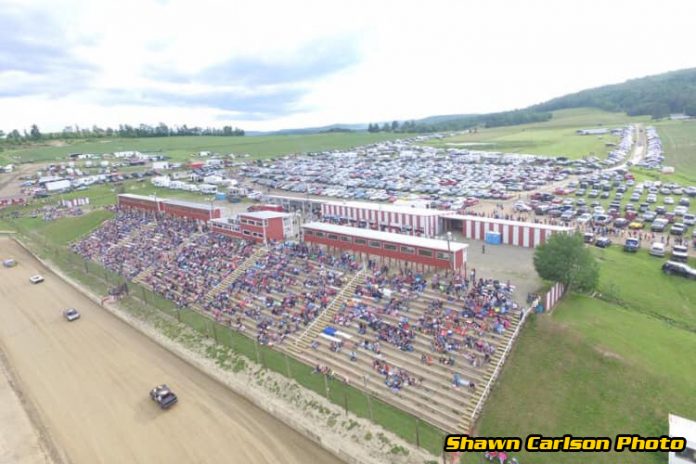 Nestled into the hills of Steuben County in the Southern Tier of New York State sits a racetrack that was dug out of the Williams family farm back in the early 1960’s. Opened in 1965, Woodhull Raceway would quickly become the Saturday night Mecca for a town population resting at just over 1600.

When George Williams was initially granted use of the town’s grader for one day to dig out the facility’s layout, his vision was to create a race place that his family took pride in, that supported the racers and fans and would do things “differently” if it was right for the racers. A notion that eventually even caught the eye and ear of DIRT Motorsports promoter Glenn Donnelly, who appreciated the ‘Williams Way.’

The Williams family’s tenure lasted from 1965 through 1997- well over 30 years building and cultivating a way of life in Steuben County and surrounding communities.

Woodhull Raceway is unique, a small bullring located in the bottom of the bowl-shaped hill that offers the best seat in the house anywhere on the property. A place that NASCAR Truck Series and Dirt Modified star Stewart Friesen said dirt racing needed more of when he ribbed Short Track Super Series promoter Brett Deyo in asking, “Why don’t you bring us to more places like Woodhull?” To which Deyo replied, “There is no other place like Woodhull.”

Scott and Amy Drake would oversee the facility from 1998-2004, Vern Wasson from 2005-2009 and latest owners Ted & Brandi White from 2010-2019. 2020 will write a new chapter in the racetrack’s history as local business entrepreneurs Terry and Nikki Brewer have purchased the one-third-mile bullring.

But don’t think for a second that because Terry and Nikki now carry the title of “new owners” that this racing thing is a “new” thing for them.

In fact, Nikki tells DirtTrackDigest.com that their taking ownership of Woodhull is really bringing the track back into the original founding family and something that she only wished she could have been a part of when the track sold in 1998.

“My great-grandmother and George Williams were brother and sister,” noted Brewer. “When the track sold to the Drakes in the 90’s, I wished I had been in the position to buy it myself. So to me it’s now back in the family you might say.”

Barstool Sports coined the phrase “Saturdays are for the boys,” but in Woodhull, Saturdays are for dirt track racing, camping and excitement. All things that the track has thrived on in recent years and something that Brewer says she remembers from her childhood.

“I’ve been going to the races at Woodhull since I was little, we used to sit in the dirt on the hill before they had full grandstands. We’ve seen some of the best come and go through Woodhull. Names like Sherwood, Lawson we remember from the glory days to even our team fielding cars for names like Hartman Jr., Terry Hough and the Jackson boys.”

In those days of operating their own race teams, the Brewers logged a lot of mile traveling to dirt races all over the Northeast. Yet, they still never seemed to quite find a place like their home track.

“For all the tracks we’ve ever visited watching racing or racing ourselves, there’s no place like Woodhull- to us Woodhull Raceway has always been home.”

What will make this new ownership team successful is that Terry and Nikki both bring a wealth of knowledge in local business, along with their own special skill-sets that are required to operate a racing facility. Terry will focus on the physical property, track grooming and overseeing race operations, while Nikki will put her focus on the business, concessions and staff management.

“Terry has been in the trucking business for years and is a former Highway Superintendent. He’s going to enjoy the racing, the cars and the track side of it. We own the Nikk L Brew in Canisteo and I bring to the table experience teaching in the culinary arts and maintenance which gives me a lot of ideas to help improve things in that area in the future.”

This upcoming first year is going to be crucial for the ‘new guard’ at Woodhull. One of transition, which is something the Brewers are not taking lightly. While they will need to develop their own way of operating the historic facility, don’t expect to see major changes in 2020.

“We want to transition into ownership smoothly, we don’t intend on swooping in and making major changes right away. Everyone needs time to adjust, learn and get our feet wet.”

While the Brewers and the Whites discuss scheduling for 2020 this week, there are several major shows already planned for the upcoming race season that fans have been buzzing about. After the 2019 running of the ‘Hustlin’ the High Banks’ for Brett Deyo’s Short Track Super Series was rained out completely, it was announced the STSS will return to Woodhull, N.Y., on Tuesday August 11, 2020.

But as big as that show is for the Modifieds, there is a cult following of dirt Late Model fans in and around Woodhull and to their west. A group of fans that were over the moon to find out that for the first time in 8 years, Woodhull Raceway will see Super Late Models fire around ‘New York’s Toughest Bullring’ on Saturday June 20, 2020.

With the ‘new guard’ making their grand entrance, the ‘old guard’ made their swan song announcement at the track’s awards banquet in early December. Ted and Brandi White have passed the baton after a 10-year run at the helm at Woodhull. A run that Ted White says was both fun and rewarding.

“As outgoing owners of the track Brandi and I just want to wish the Brewer’s well in their venture here at Woodhull,” White said. “Terry and Nikki have been fixtures here for a very long time, have been a part of the track activities, have supported a tremendous number of racers, they run great businesses and they will thrive here.”

While wishing new ownership well on one hand, the Whites are very reflective at the end of their run as well.

“Brandi and I were just talking the other day about how thankful we are to have had such great support from the racers, their crews, our dedicated staff, our sponsors and without a doubt our fans. We have the most loyal and passionate fans in all of motorsports every Saturday night up here in the boonies.”

While the Brewer family took ownership a few weeks ago, the White family will stick around this season as consultants to the new ownership to help ease the transition.

The racetrack up on the hill on County Route 102. Drive up the hill and when you see God, turn right. You’ll love what you’ll find.