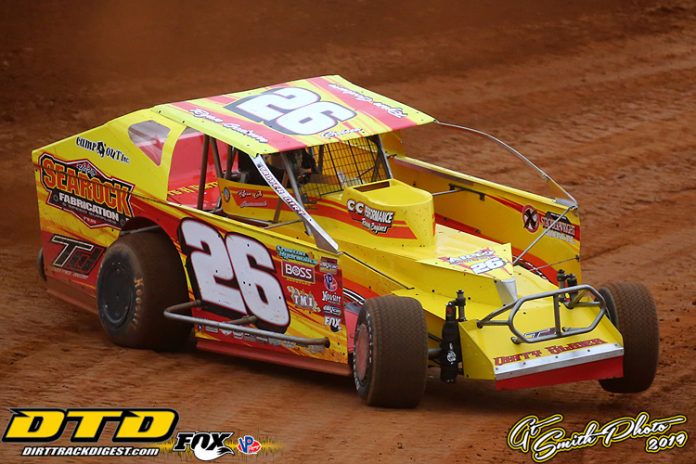 Ryan Godown knew going into 2019 that it would be a steep learning curve for the veteran driver out of Ringoes, N.J. The decision Godown and his team made to step out of their comfort zone and embark on a new venture was a decision that did not come easily, but one he also knew would help him become a better driver.

It would’ve been an easy call for Godown to stick with his normal routine and race his Modified at New Egypt Speedway on Saturday nights, where he is a multi-time champion. In all likelihood, Godown would’ve won multiple features and been a strong contender for the season long track title. As it was in his infrequent visits to New Egypt, Godown still managed to visit victory lane a total of three times.

Instead, Godown and the Searock No. 26 team headed north to run in the Super DIRTcar Series. The team did stay at the Big Diamond Speedway on Friday nights and recorded three victories and came within a gallon of gas of winning the track championship.

The team was also able to win a race at the famed Orange County Fair Speedway, which was his first ever victory at the track. All-in-all, the team won a total of seven races in 2019 which most drivers would be happy with, but as always Godown wanted more.

Running the Super DIRTcar Series has always been a dream for Godown and with the backing of owner Steve Searock and some great sponsors like Ellery’s Bar & Grill, TMI Trucking, Boss Snowplows, Creston Hydraulics and others Godown was able to fulfill his dream.

Racing against some of the best drivers in the sport, along with racing on tracks Godown had never raced on before, was a daunting task for the team. At the end of the long grueling grind, Godown ended up finishing seventh in series points along with being named “Rookie of the Year” for the series.

Godown’s best series finish of the year was a second place at OCFS along with a fourth-place finish during the Super DIRT Week. Godown’s ultimate goal was to win a race on the series and even though the team didn’t accomplish that goal, it was definitely a successful season the first time series competitor.

“It was tough, obviously we knew we had a big task in front of us before the season started and as the season went on I thought we did as good as we were supposed to do in some of the races, and obviously, I would’ve liked to have done better in others and those are the ones that were upsetting on the rides home,” cited Godown. “If I had to give myself a grade for the season, I would say it was a B. We accomplished everything we set out to do with the exception of getting a win, but we knew going into it that a win would be hard to get against this level of competition on many tracks I had no experience on. Our one goal was to complete all the laps on the series, and we did that.”

Godown felt like the team’s lack of fresher motors came into play as the season went on.  The team raced on a budget and they were forced to more with less as they tried to compete with the larger teams on the series.

“I think what hurt us towards the end of the year was that we didn’t have any fresh bullets (motors) to put into the car and we just fell a little bit behind on the motor program. Some of these guys were able to put fresh pieces in towards the end of the season.  We just weren’t able to. I think it hurt us going into Lebanon Valley and going to Charlotte, those are two tracks that you need high power for, and we were just a little short, but we made do with what we had and did well with it.”

The rigors of competing on the series is tough for any team, but for a team located where the Searock Team is located, it is doubly tough. Other than OCFS, most tracks on the tour were at least a four-hour drive for the team. That much travel takes a toll on a team through year, not to mention the cost of fuel for the hauler.

“It’s a hard deal to do what we did last year with a small crew,” explained Godown. “It’s a lot of driving and a lot of work and it puts a lot of stress on everyone, but I think we did a good job and everyone worked hard to get us to where were at.  I can’t thank them enough for all of their efforts.”

Will Godown comeback for another year on the series, only time will tell.  Whatever the team decides on for 2020 one thing is for sure, Godown will definitely be a better driver for it.

“As of right now I can say that Searock and I have talked and he has no interest in doing the Super DIRTcar Series again this year and that is mostly due to financial reasons than anything,” mentioned Godown. “We honestly don’t know what we are doing yet for this year. We don’t know what we are doing at Big Diamond and what we will be doing on Saturday nights. We have an idea, but nothing solidified that we can say yet. I was hoping my phone would ring with an offer to drive for someone on the series, but that hasn’t happened yet so that’s not good.  It’s tough out there right now. There aren’t too many rides open and it costs a lot of money to put one together.”

No matter where Godown and Searock decide to race next season you can be sure they will be ready to race and will be in the mix for victories.