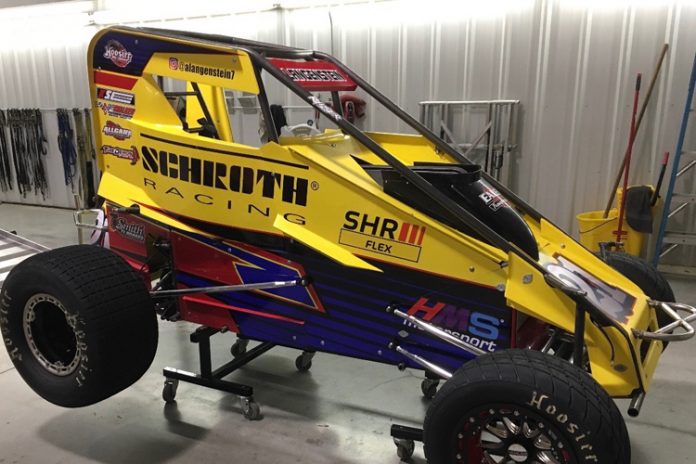 Young Austin Langenstien made his Chili Bowl debut two years ago in 2018. Although not making it into the coveted Saturday night A-Main, the very accomplished asphalt racer did well in his Midget debut and was very competitive during his qualifying night.  Ultimately his inexperience in racing a dirt Midget caught up with him forcing him to take part in Saturday’s alphabet soup at the Tulsa Expo Center where his night finished in the E-Main.

“Since I raced the Chili Bowl back in 2018, I’ve wanted to race every year I could,” cited Langenstein. “But my day job at HMS Motorsport has to come first and last year I wasn’t able to find sponsorship.  I also didn’t have anyone to go out to Tulsa and help me work because we set up all of the HMS Motorsport products at the trade show in the Expo as well.”

Austin, who is employed by HMS Motorsport, has a very busy work schedule which doesn’t allow time to race as much as he would like to. HMS Motorsport is a leader and innovator when it comes to safety in racing and Langenstein takes his role at HMS very seriously.

Langenstein was hopeful to be able to land a ride in last year’s Chili Bowl but it did not come to fruition. In 2020 however, Austin was offered to join Team Ripper Racing to compete in this year’s edition of the Lucas Oil Chili Bowl Nationals.

“I met Flea (Team Ripper’s Crew Chief, Flea Ruzic) a few years ago and we’ve followed each other on Twitter,” as Langenstein explained how his Chili Bowl ride came about. “I reached out to him earlier about potentially running one their cars this year if I came up with sponsorship. Thankfully, I was able to come up with the sponsorship and we were able to put the deal together and the rest is history.”

Getting behind Langenstein’s effort at the 2020 Lucas Oil Chili Bowl Nationals is Schroth Racing and Langestein’s employer HMS Motorsport of which Langenstein quickly added “I work for the best company ever.”

The Charlotte, N.C., resident has not sat behind the wheel of a dirt race car since the World Finals at the Dirt Track at Charlotte back in November of 2018 when he raced a Northeast Modified for Keith Flach. Langenstein has no worries that it will take him little time to get back acclimated behind the wheel of his No. 21K Midget when practice begins on Monday.

“The only other time I raced at the Chili Bowl I had never ever sat in a Midget until Monday when we rolled out for practice,” mentioned Langenstein. “Billy and Chad Boat gave me a good car, but I knew nothing as to what to expect about the week. I’ve been to the Chili Bowl before, but it’s a big difference when you are there as a spectator or working there at the Expo than when you are actually on the track.

“So, I went there with the mindset that it was like any other racetrack and it worked out well for us. I made a few mistakes that cost us a little bit. So move forward two years and now I know what to expect.  I feel honestly Flea and the boys over at Team Ripper will actually have a car prepared for me a little better than when I ran with Chad, nothing against them, but I think we have newer and better engine.”

It would be a dream come true for Langenstein to make the Saturday’s A-Main in Tulsa, but he knows it will take a very strong effort on his qualifying night along with some luck to get there.

“We’re going there to win, but I know I have to be realistic about it as well,” explained Langenstein. “But I am not going to sit in a racecar if I don’t think I can win. So, we’re going there with the mindset to win and do the best we can. I honestly think I have a little bit of an edge on everyone. It’s an extremely stressful week and a long week and you can get wrapped up in where your lining up on your qualifying night or in whatever main you are in on Saturday. For me, I don’t have the luxury to do that because when I am not on the track I will be concentrating on working at the Expo.  I won’t have time to worry about where we will end up and things like that” Langenstein knows he will have strong support from his team and also from his father Charlie Langenstein who is a legendary crew chief here in the Northeast having just been elected to the NYSCCA Hall of Fame. The elder Langenstein is also a member of the Dirt Motorsports Hall of Fame and was a very successful mechanic on the championship winning teams at Hendrick Motorsports.

“I am lucky to have great support behind me,” mentioned Langenstein. “I have a great company in HMS Motorsport behind me and my colleague Jeff will be there with me to support me and help me out all week working in the booth. My family is leaving to come out on Sunday and I’m not sure they will get there in time for practice on Monday, but they will be there for my prelim night. I also have a ton of friends out in Tulsa so it will be a fun week.”

With such a strong field of over 350 Midgets at the Tulsa Expo Center to compete in this year’s Chili Bowl, Langenstein knows he will have his work cut out for him.  One thing for sure is that we know he will give it a 100% effort and has the confidence in his abilities to get the job done.

“Like you said, there’s over 350 entries all going for 22 spots in Saturday’s A-Main,” cited Langenstein. “Of course, that’s what we’re all striving for, but at the end of the day they don’t know who I am, and I like flying in under the radar. We’re going to go out there and do what we did last time and get a couple of mains better, maybe put it in the show and come home with a Golder Driller on Saturday night.”