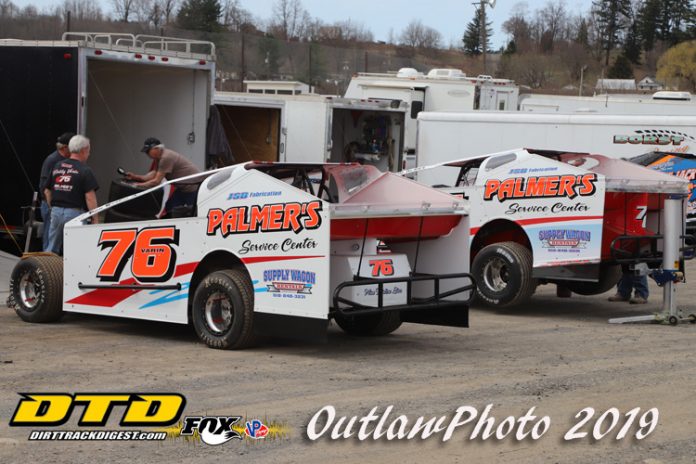 HOWES CAVE, NY – Alton and Carole Palmer of Palmer Service Center (Howes Cave, NY) announced today that for the upcoming 2020 season they will be stepping back their Modified program as their driver, Bobby Varin, has informed them he needs to step away from full-time racing for a while.

Their involvement in racing began in 1977 when the no. 76 Palmer Service Center debuted with Alton as the driver.  That involvement grew over time, even after Alton’s retirement from behind the wheel.  It expanded to include various levels of support for some of the most well-known racers in the Capital District area of New York, including Lou Lazzaro, Dave Lape, Jack Johnson, Ronnie Johnson and, most recently, Bobby Varin.    All visited victory lane often, not only at their home track of Fonda Speedway, but at many other tracks throughout the Northeast, garnering not only wins but track championships along the way.

Drivers from other classes who have benefited from Palmer’s support include John McAuliffe, Ron Constantino, Vinnie Sangenetti, Kevin Buff, Keith Tesiero, and Dave Constantino to name a few.

With Varin’s recent announcement to Palmers of his plan to step back this year, the focus of the Palmer’s sponsorship in 2020 will be on three other local drivers—Ricky Quick will run a limited program in the no. 76 Sportsman car owned by the Palmers, JaMike Sowle will run full-time in the Sportsman class weekly at Fonda Speedway with Palmer Service Center sponsorship, and Kenny Gates will also run full time with Palmer Service Center sponsorship at Fonda Speedway in the Pro Stock class.

JaMike Sowle’s response when questioned about the support of Alton and Carole Palmer was “…it pretty much means everything.  I couldn’t have raced last year without their help.  The same for this year.”  Sowle is hoping to be able to run some special Sportsman events at other tracks as well.

Long-time Pro Stock driver Kenny Gates stated, “They have been there for me for years.  They are Hall of Famers…super nice people—friends who will do anything they can for you and not just in racing.  I really appreciate it.”  Gates will be running for the track title this season at Fonda Speedway with some limited appearances at Utica-Rome Speedway and as many of the end-of-year tour shows that he can.

Although Carole and Alton Palmer will miss their involvement at the Modified level weekly at Fonda, they are looking forward to what they will be doing as owners and sponsors in 2020.  With a new Teo Pro car and new JPM motor ordered to be at the ready in case the team does get to run a few of the larger special shows, Carole stated “…we are hopeful to be able to run several of the major events during this season and plan to be ready for it.  In the meantime, we are glad to be able to work with the other guys we sponsor weekly and are hopeful they will each have a great season.”