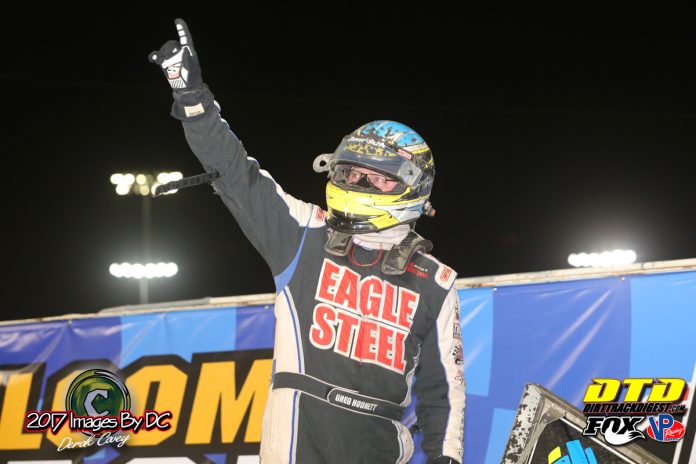 Greg Hodnett – A native of Memphis who would eventually be a card holding member of the Pennsylvania Posse, Greg racked up 286 wins in his sprint car career. He won twenty World of Outlaws and 22 All Star events in his career. The 2009 Williams Grove National Open winner was the 1993 WoO Rookie of the Year, a five time Williams Grove Speedway champion, a two-time Selinsgrove Speedway and Susquehanna Speedway champion, and a five-time Pennsylvania Speedweek titlist.

Tim Shaffer – “The Steel City Outlaw” is a four-time All Star champion, the 1999 World of Outlaws Rookie of the Year and three-time Ohio Sprint Speedweek champ. He is fourth all-time with 66 career All Star wins and has recorded 27 with the WoO. Tim won the $150,000 2010 Knoxville Nationals and the $100,000 2018 Sprint Car World Championship in Mansfield, Ohio. Among his many other wins are two Don Martin Memorial Silver Cup titles at Lernerville.

Jeff Swindell – Jeff grew up in the racing Swindell family near Memphis and has excelled as both a driver and as an innovator and manufacturer. He was the 1981 World of Outlaws Rookie of the Year, and has 51 career wins with that series. Big wins have included the Jim Raper Memorial Dirt Cup at Skagit, the Eagle (NE) Nationals, the Don Martin Memorial Silver Cup and the Gold Cup in Chico, California. He also won the Knoxville 360 Nationals in 2002. The versatile driver is also a two-time winner of the famous USAC Silver Crown Hoosier Hundred. He is also an awarded manufacturer, most recently with Swindell electronic bleeders.

Walter Dyer – Walt Dyer’s famous “Brickmobile” #461 was a staple in central Pennsylvania for over 30 years. Walt racked up over 165 wins at thirteen different tracks in his career, including the Williams Grove National Open, the Tuscarora 50, the East Bay Winternationals and many more, with drivers such as Billy Stief, Paul Lotier, Lance Dewease. His last win came with Curt Michael, fittingly on 4-06-01.

Paul Leffler – Paul was both and owner and builder on his sprint cars. He fabricated almost every piece himself. He was crew chief for three USAC National Sprint Car champions, Greg Weld (’67), Tom Bigelow (’78) and his son Greg Leffler (1979). Paul has 29 USAC sprint car wins as an owner or co-owner. He had 34 more as crew chief for Sherman Armstrong’s cars from 1977-80. He built over 60 open wheel race cars during his career.

Don Lamberti – The co-founder of Casey’s General Stores has been a lifelong race fan, sponsor and supporter. With good friend Gil Sonner, Don put a car together from a scrap pile as a teenager. Don would partner with Gil to compete in 50 Knoxville Nationals, as well as many big wins across the country. Thanks to Don, Casey’s has been a huge supporter of racing, drivers, events and sanctions in the Midwest and around the country.

L. Spencer Riggs – Growing up in Indianapolis, Spencer was influenced at a young age by the greats of the sport. He used his gift of storytelling and writing to give us pieces in National Speed Sport News, Open Wheel, Circle Track, the Indianapolis Star and countless other periodicals over the years. Spencer co-write “Indy 500 Chronicles” and authored “Langhorne! No Man’s Land.” He has several awards and honors for his writing over the years.

Bill Cummings – From Indianapolis, Bill grew up not far from the Indianapolis Motor Speedway, where he would become most famous for winning the 1934 Indianapolis 500. Cummings specialized on the dirt tracks and was a consistent winner in “big cars” during the late 1920’s, before making a spectacular debut at Langhorne Speedway by winning in 1930. He then won the 100-miler that year at Syracuse, and the AAA rookie finished third in points. Nicknamed “Wild” Bill, he won the ’34 Indy 500 with his fuel conservation. He suggested they start calling him “Conservative William” afterwards.

According to National Sprint Car Hall of Fame & Museum Foundation executive director Bob Baker, “This year’s inductee group is another testament to the hard work put in by our 72-member National Induction Committee! We are really looking forward to our 31st induction banquet on the Marion County Fairgrounds in Knoxville, Iowa on Saturday, May 30.”