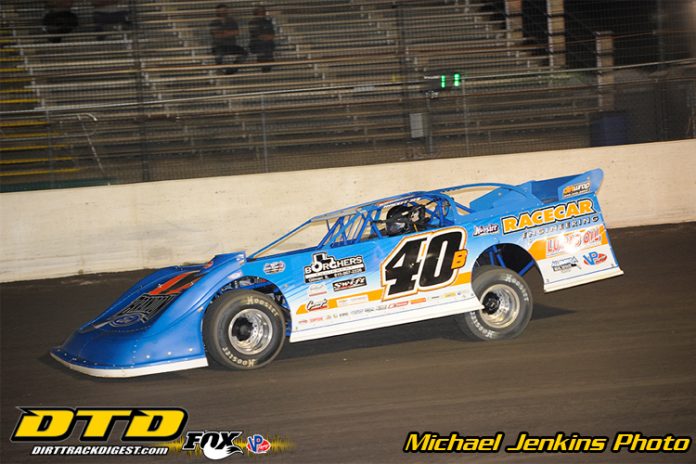 BARBERVILLE, FL – The first race night of the inaugural DIRTcar Sunshine Nationals was jam-packed with the Late Model racing everyone had been craving since the 2019 regular season wound down just a few months ago.

Twenty-four 602 Late Models, 16 Florida Late Models and 41 Pro Late Models lined the Volusia Speedway Park pit areas on Thursday night for their first look of the year at the track under racing conditions. The three Features capped off what was a very entertaining night of racing at The World’s Fastest Half Mile, in which Kyle Bronson came out on top of the DIRTcar Pro Late Models, Cody Overton won the 602 Late Model Feature and David Showers Jr. was victorious in the final event of the evening, the Florida Late Model Feature.

It seems as though it pays to be an ace of the Super Late Model ranks when jumping into a Pro Late Model at Volusia. Brandon, FL-native Kyle Bronson put on a dominant display of speed and car control over 25 laps as he beat out fellow Super Late Model big names Randy Weaver and Max Blair en route to his $1,500 victory.

Leading every lap, Killer put on a show out front as he grabbed the top spot on lap one and never looked back to collect the win, holding off a deep field of talent in the process.

“We’ve got a really great car, and I feel like as long as we keep the fenders on our car, we’ll have a chance to win these next couple,” Bronson said. “I’ve just got to do my job, and the car’s pretty damn good.”

The race was spotted with cautions, which meant Bronson was forced to deal with the pressure restacking behind him for each restart. But he handled those perfectly; it was a close call on lap nine that gave him his biggest challenge.

Middleburg, FL-driver Mark Whitener had a good run going to Bronson’s inside as they dove into Turn 1. The two ended up making slight contact, which sent Whitener around right in front of the oncoming field of cars. Somehow, everyone avoided him, and Whitener rejoined the field at the tail under the ensuing caution flag. Bronson escaped unharmed and went on to win the race, while Whitener made up a ton of ground in the final 16 laps to come back and finish eighth and pick up the Hard Charger honors.

“[Whitener] said he was going to go in and try to slide me there, but I was already turned down the racetrack and he hit me in the left-rear and turned himself around, I guess,” Bronson said. “We always race hard and rub a little bit, unfortunately. But that’s the way racing goes.”

Despite redrawing fifth, Randy Weaver found himself with a little bit of work to do in the early going of the 25-lap Feature, as he slipped back on the opening circuit and crossed the line in ninth on lap two. But with some patience and a great car, he and his newly wrapped #116 made it all the way back up front to collect the runner-up spot.

He’s traveled a long way from Titusville, PA, and there was no way Max Blair was leaving Volusia without at least one podium finish this weekend. He didn’t have to wait long, as he kept his car solidly inside the top 5 through all 25 laps to complete the podium.

Winner of the race run prior to the Pro Late Models Feature, Evans, GA-native Cody Overton, was looking to climb from the back to the front over 25 laps to put the cherry atop his Thursday night. Unfortunately, his night ended on the hook, as he was on the receiving end of a nasty pile-up wreck on the initial start that forced him to retire without a single lap completed.

Overton did, however, take home a nice check in the first Feature of the evening for his efforts behind the wheel of his #97 602 Late Model – race he won by over three seconds ahead of runner-up Bud Chauncey and podium finisher Colton Leyendecker.

Using the low line to his advantage, Lil Sexy made a great move to the inside of Bud Chauncey on lap eight to take the lead, and the win, to kick off his 2020 season in Florida.

For most of the 20-lap Feature race, teenage pilot Bubba Whitener seemed to have had the Thursday night Feature locked up. Until he reached lap 13.

Trying to get around slower traffic on the high-side, Whitener came up on a car just before the flag stand and made heavy contact, sending the lapped car into the inside wall and severely damaging his own. Whitener went off on the hook, which handed the lead over to David Showers Jr., who took it and led the rest of the way for his first-ever Late Model victory.

The Sunshine Nationals action continues from Volusia on Friday night with round two of racing. Hot Laps begin at 5:15pm ET on DIRTVision!