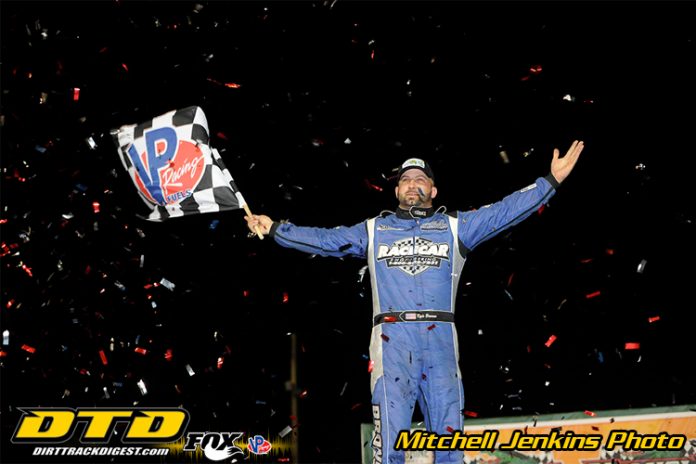 BARBERVILLE, FL – Three days of Dirt Late Model racing in the Sunshine State came to an exciting finish on Saturday night at Volusia Speedway Park when Kyle Bronson completed the weekend sweep of the DIRTcar Pro Late Model class after a thrilling battle with Michael Page to capture the $10,000 Sunshine Nationals finale check.

Completing Saturday night’s action were two other action-packed Features in which Colton Leyendecker traded in back-to-back third-place finishes for a win in the 602 Late Model division while Dusty Sparkman got his first career win at Volusia in the Florida Late Model Feature.

A member of the invading “Super Late Model regulars” club this weekend, Brandon, FL’s Kyle Bronson was a big favorite to win it all right from the get-go. And he did just that.

The 29-year-old wheelman known as Killer never lost his focus throughout the entire event. Not once. He was fastest overall on practice night, set fast time in Qualifying on Friday night, won all but one of his Heat races and was victorious in all three Features. Utter domination.

One notable regarding his wins – each one was increasingly more challenging than the last. That notion really came to the forefront in Saturday night’s drive to Victory Lane, when he was forced to drive through fellow Super Late Model guru Michael Page to earn it. And make no mistake, Page really, really made Bronson work for it.

Right at the drop of the green, Page made a beeline for the lead as he proceeded to grab it and lead the field around to complete the first lap. Starting right behind Page, Bronson followed him and broke away from the pack a few laps later to start their high-speed battle for the top spot.

Bronson threw the first of many traded slide-jobs between the two on lap 10, clipping Page’s nose as he drove on by. On a restart just three laps later, Page returned the favor by getting into Bronson’s left-rear on a failed pass attempt in Turn 1.

“I slid [Page] and he kinda got in the back of me, but it was just hard racing,” Bronson said. “He hit me in the left-rear, just trying hard, and when he did it bent my left-rear wheel.”

“We’re both as hard of a racer as the other,” Page said. “I just felt that, on a racetrack that was wide, [Bronson] just kinda came in there and thought he had me cleared but he didn’t. It knocked the steering wheel out of my hands.”

The next restart restacked the field and refocused Page, as he threw a slide-job of his own, which Bronson countered by crossing-over as they raced out of Turn 2. The second of two red flags was displayed as they entered turn three, and there the leaders sat, parked right next to each other amidst the stoppage, discussing their intentions.

“It just rubbed me the wrong way because the last time we raced, [Bronson] did the same so I returned the favor, maybe a little worse, but we stopped down there and I told him,” Page said. “We talked for a minute and I said, ‘let’s race.’ And after that, we raced. I don’t know if you could have raced anybody harder after that.”

“We were just telling each other how much we loved each other and were ready to drink a beer after the races,” Bronson joked.

Sitting inside of his Baird Truck and Trailer Sales #18X, Page was dreading the time spent not moving, as the gamble he took on tire selection for the 30-lap Feature did not appear to be working to his advantage.

“The red flags killed it. I went on hard tires so they kinda sealed-up on me. Every time the car would come back in, the yellow would come out,” Page said.

Meanwhile, an unfortunate situation was developing right underneath Bronson’s #40B as they sat parked on the track, waiting for cleanup to conclude. The contact Bronson’s left-rear tire received from Page’s nose on the earlier restart resulted in a slow leak, and Bronson could hear the clock ticking as they awaited the next restart.

“My tire was going flat since lap 14, and then we had the red flag after that,” Bronson said. “I was praying we went back green [quick] because I could hear my tire leaking. Then it finally blew out coming to the checkered.”

“It didn’t officially blow all the way out until the last lap there, we were racing on probably a pound or two of air,” Bronson added.

In the end, the tire held up… at least, as long as it needed to for Bronson to see the checkers. He battled with the Georgian for several more laps after the red, again trading slide-jobs for the lead before lap 20. Another restart with 13 laps remaining threw Brandon Williams into the mix, who Bronson was also able to put behind him as he drove to his third checkered flag in three nights.

All-in-all, the Bronson v. Page battle was settled 100 percent on the racetrack. They may have beaten and banged their cars up quite a bit before all was said and done, but the greatest sight of all may have been in Victory Lane, where the two smiled and shook hands in front of the crowded Volusia bleachers and DIRTVision cameras.

“He knows how I felt and I know how he felt,” Page said. “Instead of going around and talking to everybody else about it, we worked it out like you’re supposed to as a racer.”

Williams brought out the final caution flag of the race with four laps remaining and dropped out due to an ill-timed mechanical failure, crumpling his best run of the weekend. Arthur Walked capped off his solid weekend with his first podium finish, and Jason Fitzgerald rebounded from being a part of the second red flag incident to come back and finish fifth.

Randy Weaver was strong all weekend but couldn’t find his mojo when it mattered most; settling for seventh after starting outside pole in the finale. Ashton Winger joined the Pro Late Model field for a chance at the 10-grand on Saturday, and had a decent run going early, but was on the receiving end of a nasty barrel-rolling flip in Turn 2 that ended his night. He, and every other driver involved, walked away under his own power.

After finishing third twice in the first two races over the weekend, Leyendecker finally pulled it off and picked up the win in the final 602 Late Model Feature of the inaugural Sunshine Nationals.

Driving past Raymond Folwell on lap five, Leyendecker grabbed the lead and never looked back, holding off Thursday night’s winner, Cody Overton, for the $1,500 check. For his consistent efforts throughout the weekend, Leyendecker was also crowned the Sunshine Nationals miniseries champion of his division.

It was almost a three-peat in two different classes over the weekend, but Sparkman put a stop to that by winning the final Florida Late Model Feature in dominating fashion, leading the final 14 laps to earn his first-ever victory in a Late Model of any kind.

Thursday and Friday night’s winner, David Showers Jr., finished sixth and was crowned the miniseries champion of the division by way of his three top-10 results.

DIRTVision will also be live all throughout DIRTcar Nationals, Feb. 4-15, for viewers to watch every lap in every race of the World of Outlaws NOS Energy Drink Sprint Car Series, World of Outlaws Morton Buildings Late Model Series, Super DIRTcar Series, All-Star Circuit of Champions and DIRTcar UMP Modifieds’ visit to The World’s Fastest Half Mile.