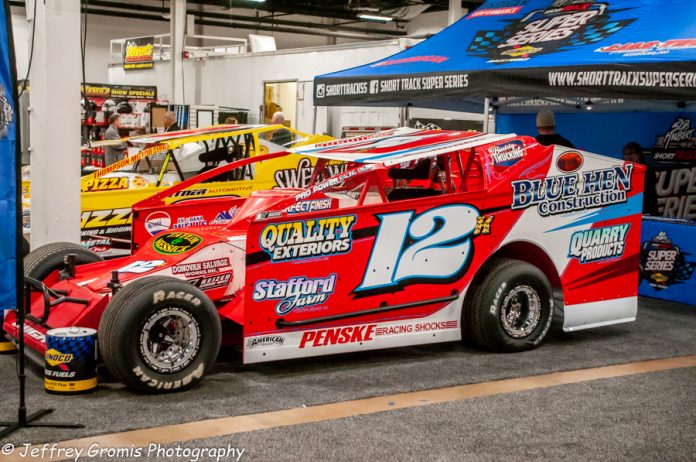 This past Saturday I had the pleasure to ride down to the 2020 version of the Pioneer Pole Building Motorsports (PPB) Exposition and Trade Show with Afton Motorsports Park (A.M.P) promoter Ron Ford and his son Nash.

The weather was great all the way down and we discussed that the crowd should be very good. After getting off turnpike it started flurrying and another mile down the road it was a whiteout and the roads slicked up in a hurry the rest of the way to the Greater Philadelphia Expo Center.

The show started out slow I thought because of that, but it picked up steam in a hurry. Before getting into some of the stuff I gathered up at the show, I want to thank Mr. Ford for the time spent and for the staff of the show for the courtesies I got, and of course Mike Mallett from right here at Dirt Track Digest (DTD) for setting it up.

We spent all day and most of the evening at the show before heading back north to go home. If you did not get to the show you missed out on another great presentation of the classic winter get-away to look at the sharp race-cars and to just get caught up with other great race folks.

We made one lap around the whole show at first just to get a feel for where some of the stuff is located and then broke up to figure out a plan of our own. I spent much of my time at the Short Track Super Series (STSS) booth and over at the Georgetown Speedway booth.

I had a chance to visit with many folks that went to Georgetown this past season and some that are looking to get back there. Most of the information I got was right from being there and talking to these folks as they came in or by others there that had information about one of the competitors. The Georgetown booth was sporting a Super Late Model (7) driven by Ross Robinson with Stockley Materials sponsorship on the side. I had many questions on that car while I sat at the booth and of all the other action at the track.

Surprisingly, I had quite a few people talking to me about the older cars that race there and how often they are there. I told them wherever they saw Little Lincolns mentioned on the schedule then they are there.

The booth right across the hallway was the STSS booth and it had the (9) Crate Sportsman car of Joe Toth who was the New Egypt Speedway champion and spent time on the STSS South Series this past summer. The Sweet Water Marina & Riverdecks sponsored ride will be headed down to the All-Tech Raceway for the Sunshine Swing, a first for the STSS in the state of Florida. Many folks were getting information on this event at the booth or signing up for that race and also signing up for the American Racer Cup. Angela Hansen spent her time at that booth and handling all those chores. The new series shirts and hoodies seem to be going well also.

The other car in the booth was the Larry Wight driven (12K) owned by Gary Simpson and sponsored by Blue Hen Construction. The car will be used on the entire South region of the STSS and maybe Orange County Speedway for the North region event of the STSS. The rest of the North region ‘Lightning’ Larry will be in the seat of a (99L) machine just recently purchased for the series.

Another gentleman I spoke with was Anthony Perrego on his plans for the upcoming race-season. He told me it was about like last year as he will be concentrating on winning the championship at the Orange County Fair Speedway in both the big-block and small-block Modified divisions. He will once again be in the Superior Remolding (44) and will do the entire STSS south region and a few races on the DIRTcar tour.

I also heard of another driver that will be calling Orange County home this season and running both big and small-block shows. The driver, Ryan Krachun, who last season competed at Big Diamond and finished 12th in points and New Egypt where he finished fifth in points is concentrating on the big 5/8th mile track on Saturday nights.

I didn’t get to speak to Brett Tonkin as he was in Brett’s STSS booth as I was in the Georgetown booth, but did hear from Ron Ford on the way home that he would be back at A.M.P. on Friday nights and will be doing Saturday racing at Five Mile Point. Ron also told me he heard Dan Creeden speaking with someone and he was going to race Penn Can Friday and Five Mile on Saturday nights.

The show had something for everyone. There were race-cars of all types and sizes. Race tracks and sanctioning bodies and vendors with race parts and vendors with none racing related items. Seminars from sponsorship to tire prep and all things in between. The three big highlights of the day were heavily attended as I went just to see how it was going. The first was the Kyle Petty autograph signing and then later at the stage was the same deal with Dale Jarrett. The biggy is at night as the group of folks that gather for the Ms. Motorsports competition certainly slows down the traffic on the walkways.

All-in-all it was a great day out and the weather cleared off so the trip home was alright except for a little miscalculation by us or the GPS. It does get you fired up for racing and it is great to know that the racing action at the All-Tech Raceway in Lake City, Florida is just a few short days away. The racing action gets underway there on Thursday, February 6 and goes through and including Saturday, February 8th. On Wednesday, February 5th the track will see the racers have a test and tune session and I hope to see many of you great folks down there enjoying the sun, fun and action.

My personal opinion is this will be a greatly attended event and I believe I will see the most Modified that I have seen in the state of Florida. The race being before the Volusia event will probably help the them pick up a couple of extra cars for the ones that can stay. Not sure DIRTcar will be sending thank you notes to Mr. Deyo though for the help on their series.

It will be a great start to February as on the 1st I will be emceeing the A.M.P. banquet and then Sunday a great Super Bowl. Tuesday the 4th south bound and down to the Sunshine tour. Until next time Race On!