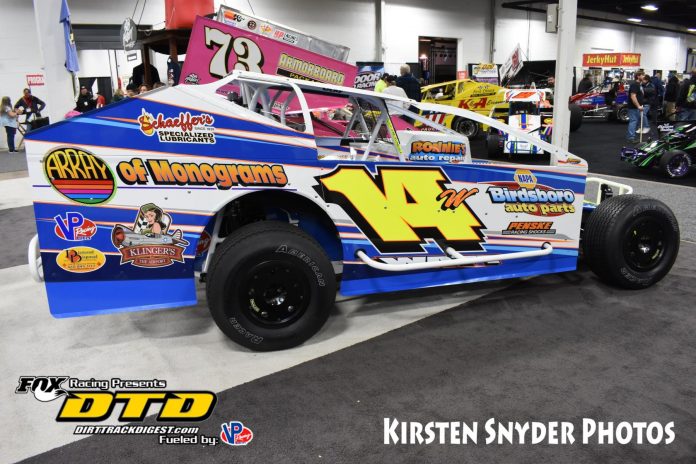 It will be another busy season for the Robert’s Racing No. 14W team with popular driver Ryan Watt behind the wheel again in 2020. Although 2019 failed to land the team a championship, it was still a very successful year for the Boyertown, Pa., wheelman. Watt managed to win multiple races and finished second in both the Bridgeport and Short Track Super Series South division points standings.

Last season, Watt cut back on his schedule somewhat to allow his young son Logan to further his racing career.

“We had a lot going last year with Logan racing and my racing,” cited Watt. “We had a good year, but we had a rough year with a lot of bad luck. I mean, if you take away a couple of the bad races we had like starting out at Port Royal breaking a drive shaft, a couple of flat tires and other little things that happened throughout the year it could’ve been a lot better.”

With the start of the 2020 racing season set to start next week in Florida, the Watt family will head south as well to the Sunshine State, but racing will not be on the agenda for Watt as this trip south will be a family vacation. But you know Watt will still have racing on his mind while there.

“I always wish I was going to Florida to race,” explained Watt. “Every year I wish I could be at Volusia racing, but it’s just not quite feasible for me. I wish something would come along like it did a couple of years ago with the Jeff Brown deal where I could just come down and help them work on the car down there. If something like that were to come along, I would be in on it. Right now, I just need to concentrate on getting everything ready to go for the season up here which starts for us only two weeks after Volusia at Delaware.

“For the guys up in New York it wasn’t a big deal to race in Volusia and it broke up their winter for them because their season doesn’t usually start until around April.  For the teams around us there is no downtime and I don’t want to miss any of our races up here because they are good paying races early on.”

Watt plans to call Bridgeport Speedway his home track this season and he is looking forward to running at the newly designed four-tenths mile oval.

“It will be a challenge there this season with the new track,” said Watt. “But I know Doug (Rose) will do a good job with it.  I’m looking forward to what he is putting together there. It’s funny, as a team we always try to race at a new track every year and this year the new track is Bridgeport, so we don’t have to travel to far to hit a new one.

“That’s one of our things we do every year is to look at the schedule, but we haven’t really done that yet this year. I feel like were behind in getting ready for this year, but we’re really not.  I just haven’t had the time to sit down and go over each track’s schedule this year to see what new track we might want to hit this year except Bridgeport, obviously. I still haven’t ever made it Lebanon Valley yet and that’s a place I wouldn’t mind going or even Albany-Saratoga to race. I went there once (Albany-Saratoga) back as a Sportsman.  I think it was 1999 when it was a USNA race, so I have never ran there in a Modified.”

After winning the STSS south title in back to back years in 2017 and 2018, Watt was dethroned last season by Matt Sheppard. The team is returning to run the STSS South series to see if they can wrestle the title away from Sheppard and become a four-time champion of the series.

With a plethora of special races in the Mid-Atlantic region, Watt and his team will be very busy as they prepare their Bicknell Chassis Modifieds to compete in the “Thunder on the Hill” events at Grandview Speedway along with the special shows at Georgetown and Delaware. Watt is also looking forward to the Modifieds returning to the Selinsgrove Speedway where he has raced at before. With Big Diamond Speedway making the switch to gas only this season Watt is looking forward to making some trips to the Schuylkill County track on Friday nights.

“We plan on making some trips to Big Diamond this season for sure,” explained Watt. “With the switch to gas, it makes it a lot easier for us to go there more. I plan on being there for the opener.  We don’t plan on going there weekly, but they have a lot of good specials and we want to come up and see some of our fans up in that area that we haven’t seen much. The key was them switching to gas.  For us to run there and switch to alcohol, it just wasn’t worth it.

“We’d only go about six times a year or something like that, but it wasn’t worth spending all that money to get an alcohol carburetor and fuel cell and everything to do it. I definitely think it was a wise choice for them to do that.  I kind of wish Grandview would do it as well, although everyone pretty much runs gas there now.  If they did it they wouldn’t have to have a fuel stop for the 76er.”

The Roberts Racing team will be fully prepared once the season gets underway. The team currently has a new Bicknell Chassis with a big-block motor installed into it once it is complete. Last year’s small-block car has been sold and replaced with a car that was brand new last season and never raced. The team also has the car they wrecked at Oswego last season, which has been stripped down in order to have a new body installed on it.  It is also the car Watt is working on trying some of his new suspension ideas. If trouble should arise with any of those cars, they will still have their original Bicknell Chassis which has visited victory lane on many occasions’ aka “Stitch” resting up on the lift to put back into the action if the need should arise.

One change the team did make over the winter was switching to Penske Shocks after running Fox Shocks the past few seasons. The team experimented with some Penske Shocks at the end of last season and decided that was the way to go in 2020.

“If you noticed at the Motorsports show we had Penske Shocks on our car and we have decided to make the switch from Fox to Penske’s for this season,” mentioned Watt. “When I first started racing I was on Koni’s because that’s what came with car.  Then I switched over to Penske’s and I ran Penske’s forever.

“Dave Reedy (Penske Shock Rep) had been a great help through all the years and then I just wanted to try something different and wanted to learn more about shocks.  We went to Integra’s for a little while and then we went to Fox for a couple of years and they were a great supporter and a lot of help.  I just felt like for awhile there that Fox has become kind of stale and the support wasn’t there. They were out in California and weren’t in here helping with much racing stuff.  I decided I wanted to go back with Dave Reedy. I’ve always talked to Dave, so we went back to Penske.  Penske has always had a good shock product, and like I said I’ve had a relationship with Dave Reedy for years now and I am glad to be back on them for this year.

“When we tested them out last at the end of the year at that small-block show we won at Bridgeport I had them on. The thing was really fast that night. I am very excited about this deal and they are right here in Reading, PA so it only takes me about a half hour to get there if I need shocks or parts for them or discuss changes with Dave.”

Once again in 2020 and much to his wife Lesley’s chagrin, Watt will step into the Sprint Car world running the No. 39 for Tim Hogue.

“Right out of box, we want to go somewhere early in the season and run it a couple of times,” cited an excited Watt. “Lesley’s not happy about it, but she hasn’t left me yet (laughter).  Yes we are going to do some Sprint Car racing.  We just haven’t had time to sit down and go through the schedules and say this is exactly where we are going. We plan on doing winged 360 races and possibly trying some of the 360 wingless races somewhere, so that’s not out of the question.

“There’s also definitely a possibility of doing a couple of 410 races.  The goal was to go to Port Royal’s opener, but I don’t want to say that’s definitely going to happen yet just in case it doesn’t happen. But there is a possibility of a couple of 410 races. The plan is to not tell Lesley it’s a 410 race and tell her it’s a 360 race and then when she asks why I am running with Lance Dewease and Brian Montieth and those guys we’ll just say they must have their 360’s here today.”

If all of the above is not enough for Watt, there is also the Watt’s young son Logan who keeps progressing up the ladder in his promising racing career. For the past two seasons, Logan has had the bragging rights in the Watt household as it pertains to the number of wins and this year will no doubt be another busy year for the talented young wheelman.

“Like I said, we haven’t sat down and looked at all the schedules yet, but he (Logan) definitely will have a busy season again,” explained the proud father. “Just like last year, we will try and hit some national and regional events with the quarter midget.  He’ll be out racing quite a bit. Logan will be in the same weight class as last year. It doesn’t go by age anymore. Once you move out of the Junior Class and into the Senior Class it goes by weight.  Once the driver is over one hundred pounds he can move into the heavy class and we’re not there yet with Logan.”

Of course, Watt couldn’t do any of this without a great group of owners, sponsors, crew members and the support of his family and if you have ever been around the Watt trailer both before and after the races you would quickly agree.