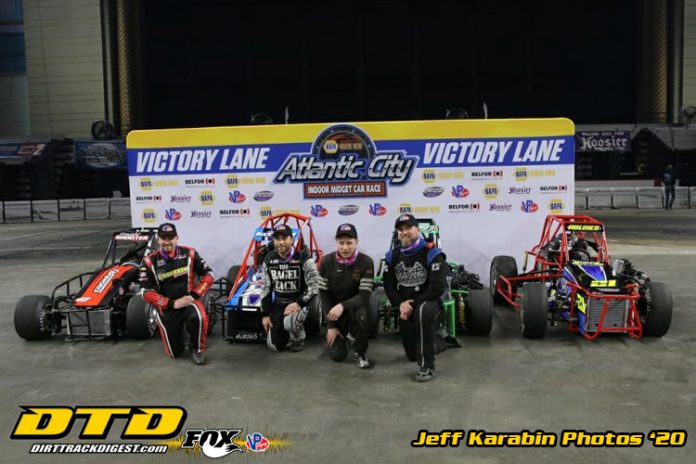 Kyle Hutchinson, of East Aurora, NY won the first TQ race of the afternoon, capturing the 15-lap Dr. Lowe Non Qualifiers preliminary event. In so doing, he joined the other TQ heat race winners in the Saturday night feature field.

In the first TQ Midget heat race, Joey Jarowicz of Lebanon, NJ cartwheeled through the third turn on the 12th lap caroming off the concrete wall. He was awake and alert as he was being assisted from the track by EMTs and was transported to an area hospital.

Day Two of the Indoor Auto Racing Series Fueled By VP Race Fuels continues Saturday, February 1 with spectator gates opening to Boardwalk Hall for Fanfest At Trackside, beginning at 5:00 PM. Racing begins at 7:00 PM and will consist of six TQ Midget heats, a TQ Dash that will establish the starting order of the eight fastest qualifiers from Friday’s Time Trials, and three TQ B-Mains.

The Champ Kart feature, over 25 laps featuring 24 cars is the first of the three features with the Slingshots running the same distance with the same size field.

The 18th Gambler’s Classic TQ Midget 40-lap feature, the highlight of NAPA Know How Weekend, is the final race of the night, followed by post-race accolades and special awards.