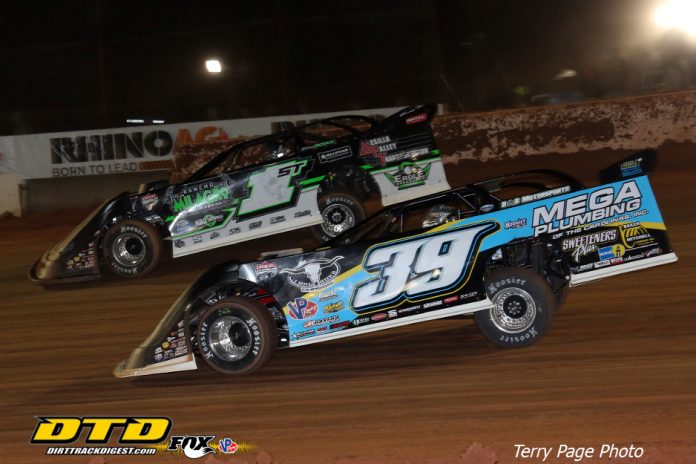 WAYNESVILLE, GA – Tim McCreadie started off the 2020 Lucas Oil Late Model Dirt Series with a convincing win in the RhinoAg Super Bowl of Racing at Golden Isles Speedway.  The 45-year-old New York native was racing with a heavy-heart as his father, “Barefoot” Bob McCreadie was on his mind. The runner-up of the 2019 Championship went to victory lane after leading the entire 50 laps, which was his 16th career visit to Lucas Oil Victory Lane.
The winner was challenged briefly by Mark Whitener and Jonathan Davenport while in traffic. Late in the race, a timely caution allowed McCreadie to pull away from 19th-place starter Brandon Overton. Overton earned the Hard Charger of the Race with a stirring run to finish in second behind McCreadie.
McCreadie grabbed the lead at the start of the feature and bolted to the early lead over Davenport, Devin Moran, and Whitener. Whitener was the car on the move as he came from fifth to third and on lap seven, he overtook Davenport for second. Whitener was looking for his first career win and first-ever podium finish in series competition.
As McCreadie cruised to his first-ever win at Golden Isles Speedway, Whitener suffered a flat-tire on the final lap, relegating him to a 22nd place finish.  Overton, in the Wells and Sons Motorsports Longhorn tried to catch McCreadie but came home in second. Brandon Sheppard crossed the line in third, followed by Mike Marlar, and the defending series champion, Jonathan Davenport.
An emotional McCreadie commented that his father has been battling health issues and credited his new car owners for their belief in him. “They [Donald and Gena Bradsher] didn’t have to do this. They wanted to race like this, Donald has won a lot of races. For him to say, I want to sponsor a North Carolina team [where Longhorn Chassis is located] and even though you are from New York, we’ll take you.”
“My former owners Ann and Carl Myers were great. In fact, Sweeteners Plus is still on this car. Donald recently lost one of his good friends and I’ve had issues going on with my dad. I hope he [dad] has turned the corner. He was cracking jokes earlier today and if I need to go back home, then I will. I want to thank all of the well-wishers who said we are thinking about you, it means a lot to me and my family.”
Overton owns one career win at Golden Isles Speedway and was pleased with the effort for his new team.  “We dug ourselves into a hole in qualifying and really didn’t run well in the heat. We turned it around in the B-main and I began to feel like we had a pretty good car. There’s a lot of people here to watch me race and I felt like I let them down by not getting the win. Congrats to Timmy, I don’t want to take anything away from him and his team, they work very hard as well. I enjoy coming over here, and hope the fans enjoyed the show.”
Sheppard said the early part of the race played a factor in the end. “I was too nice out there. Thanks to my guys for giving me a great race car.  In the early stages of the race I could’ve done better. Congratulations to Timmy and Overton they did a really good job tonight. I wish I could have done better for the team; they worked their tails off.”
The winner’s Donald and Gena Bradsher-owned Longhorn Chassis is powered by a Cornett Racing Engine and is sponsored by Mega Plumbing of the Carolinas, Bilstein Shocks, VP Fuels, Sweeteners Plus, and D&E Marine.
Completing the top ten were Devin Moran, Kyle Bronson, Jimmy Owens, Dennis Erb Jr., and Shane Clanton.
Lucas Oil Late Model Dirt Series
Race Summary
Rhino Ag Super Bowl of Racing – presented by General Tire
Saturday, February 1st, 2020
Golden Isles Speedway – Waynesville, GA