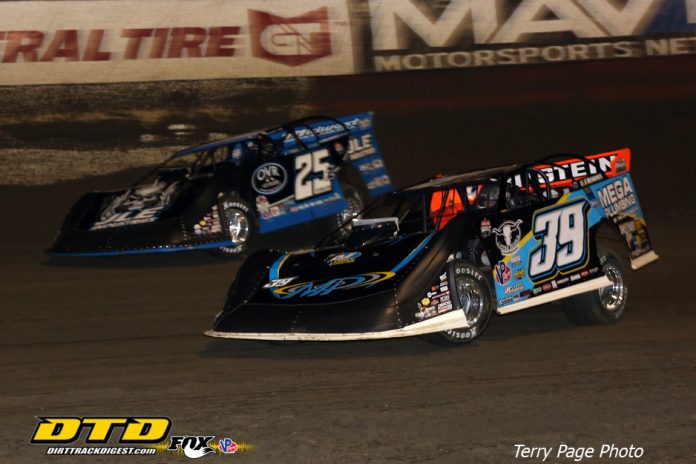 TAMPA, FL – Tim McCreadie managed to come away with another early season victory Wednesday night at East Bay Raceway Park. He inherited the lead with five laps to go after race leader Jonathan Davenport’s misfortune. Davenport appeared to be on his way to victory, but hooked a rut in turn four, folding his nosepiece under and causing his car to come to a halt on the front stretch. Kyle Bronson was unfortunate victim of circumstance, as he did not have time to slow his car down. Bronson made heavy contact with the back of Davenport’s car, eliminating both from competition.
McCreadie was second at the time of the race changing incident then picked up the lead as he held off Brandon Overton and Brandon Sheppard for his second series victory in four starts this season. It was McCreadie’s 17thcareer Lucas Oil Late Model Dirt Series win and his fourth ever at East Bay Raceway Park.
The Wells Motorsports Longhorn driven by Brandon Overton, now has three, runner-up finishes in the first four series events of 2020. Tuesday Nights feature winner, Brandon Sheppard, finished a close third to Overton. Tyler Erb came from the 22nd starting spot to place fourth, and Brian Shirley had his first top five Lucas Oil finish of the year.
McCreadie and Davenport made up the front row for the 40-lap main event. Davenport would lead the first three laps of the race in a tight battle with McCreadie. McCreadie would gain the lead briefly on lap four, but a lap later Davenport forged his way back to the point.
Dennis Erb Jr. stepped up to battle with McCreadie for second as they both trailed Davenport. Erb grabbed the second spot for two laps, but McCreadie fought back as the two had a spirited race for second.
At the halfway mark, Davenport was still in front, but by this time Overton had overtaken McCreadie for second after he started in fifth. A caution on lap 23 would bunch the field up as McCreadie charged back to second, this time around Overton. A caution on lap 28 would again set a race restart with 12 circuits left.
On the ensuing green, Davenport would start to stretch his lead back out as a torrid race for second was going on between McCreadie and Overton.  With five laps go Davenport entered turn four, hopped in the air and when he came down, the right front of his nosepiece folded under his car. At this point, he could not steer the car and was forced into the frontstretch wall. Both McCreadie and Overton dived underneath the disabled car of Davenports but fourth running Bronson, did not have time to react and smashed into the back of Davenports car.
In Lucas Oil Victory Lane for the second time in 2020, McCreadie said, “It’s exciting. I love winning, but you want to get it by passing the best. Tonight, we had some luck, and we’ll take it and go on to tomorrow. It’s such a pleasure to race with J.D (Davenport). We became real close last year and I was fully prepared to shake his hand here, because it looked like he had us just covered enough. It looks like there’s just such a bad hole off (turn) four and the bumper drug it or something. I think the worst part about it is that you can’t see (the hole). It’s covered up with fine crumbs, so you don’t really know where it is until you get there. I hate what happened to J.D., his team has helped us tremendously. I would also like to thank Gena and Donald, and my team. Gena went home earlier, and our prayers go out to her for her mother.”
Overton, like McCreadie, is driving for a new team owner this year and has remained consistent with his start to the 2020 season. “If we stay up here with these top-three runs, the wins will come. The first one’s the hardest to get. I probably didn’t have a second-place car tonight, for sure. I couldn’t get through the holes and I’d get to bouncing and the thing was kind of shutting off and blubbering … just lucky to hang on to second. I hate that for J.D. and Bronson, that didn’t look too good.”
Sheppard, in the Rocket 1 House Car fought and clawed his way to third at the finish. “It was getting better the longer the race was going. When the track was faster, (the car) was a little bit snug, especially in traffic, we were slicing and dicing. The top was the most dominant and the bottom was going away in a hurry, so we got stuck down in the bottom on about every restart, which really hurt us a lot, especially early in the race.”
“Hats off to my guys. I put us behind in qualifying a little bit and we managed a second place in the heat race. But with six heat races, that still started us 12th, so we’ve gotta try and win the heat race tomorrow and get up there in the top six.”
The winner’s Donald and Gena Bradsher-owned Longhorn Chassis is powered by a Cornett Racing Engine and sponsored by Mega Plumbing of the Carolinas, Bilstein Shocks, VP Fuels, Sweeteners Plus and D&E Marine.
Completing the top ten were Jimmy Owens, Devin Moran, Shane Clanton, Mike Marlar and Mason Zeigler.
Lucas Oil Late Model Dirt Series
Race Summary
Wrisco Industries Winternationals – presented by Lucas Oil
Wednesday, February 5th, 2020
East Bay Raceway Park – Tampa, FL