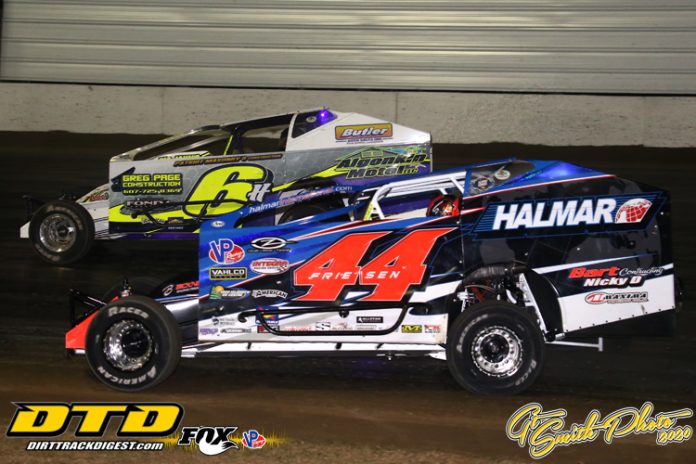 “Yeah, that one was a nailbiter,” Friesen said. “I messed up on the first restart, the bottom hadn’t rubbered up like I thought it had and I gave the lead up. Luckily, we got a quick yellow and I got a shot at it.”

Friesen jumped into the lead at the start of the first Modified feature of the season, with Larry Wight and Billy Dunn fighting for second in the early stages of the 30-lap feature. Quick movers included Matt Sheppard and Mat Williamson, with both drivers coming from the back of the top ten to fourth and fifth respectively in the first five circuits. As Wight broke free from Dunn, Friesen had extended his lead and was pulling away.

By lap 10, the middle of the speedway had emerged as the dominant lane, and lapped traffic loomed for Friesen. The first few cars were of little issue to Friesen, but just as Friesen ran into thicker traffic, a slow Demetrios Drellos forced the yellow to fly on lap 13.

With a lane of rubber in the middle-lower portion of the track, second place Wight was at a disadvantage restarting up top. However, the rubber was higher up entering turn one than the rest of the track, and Wight rolled the outside and cleared Friesen for the lead on the restart. Friesen fought back, but Wight wasn’t fazed and held the spot. Ryan Krachun hit the wall hard on lap 15, and the yellow flew again.

Wight picked the bottom on the halfway restart, ironic considering he just took the lead two laps prior restarting on the top. In a role reversal, Friesen rocked the top in turn one to regain the lead, while Williamson was now in third. Billy Decker started deep and was putting pressure on Sheppard for fifth, while Williamson was under fire from Dunn. By lap 20, Friesen was up by two seconds on Wight.

With six laps left, Jordan Watson ended up backwards and the caution flag waived. Being six to go, the restart was still double file, and Friesen picked the bottom despite the outside car taking the lead on the last two restarts.

This time was a different story, as the rubber had migrated low enough for Friesen to keep the spot. Wight lost two spots in the first set of turns, as Williamson and Sheppard snuck under for second and third.

A four to go yellow for Alex Yankowski blowing a right rear tire set up a single file restart, certainly less stressful for Friesen. From there, Friesen went unchallenged, pulling away from Williamson to score the season-opening win in the Short Track Super Series.

“The track is definitely different than what we have up north,” commented Friesen. “It rubbered up early in the middle to top, then worked its way to the bottom. I also definitely didn’t want to see all those yellows at the end on a track like this, I iced the right rear and it got a little scary at the end.”

Williamson crossed the line in second, with Sheppard, Wight, and Decker completing the top five.

In the 25-lap Crate 602 Sportsman feature Michael Ballestero held off Grant Hilfiger and his brother Tony to earn the checkered flag. The win was worth $1,250. Tim Harmant Jr., and Kevin Chaffee completed the top five.