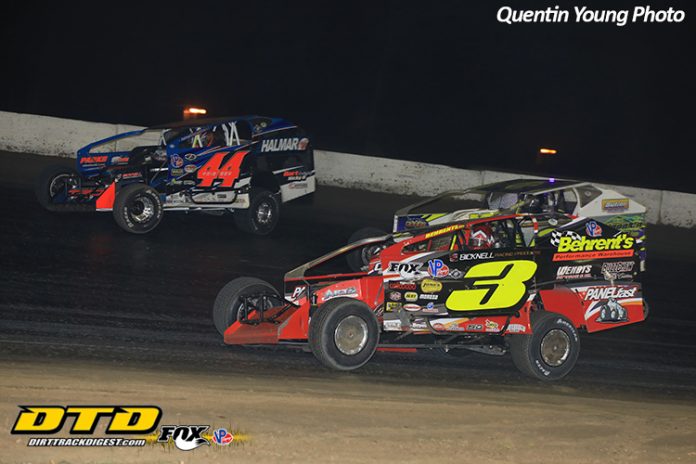 “What a race track we had for this one,” noted Friesen. “We were all under a blanket racing for the lead there.”

Billy Dunn got the best of Matt Sheppard at the start of the 40-lap main, leading the opening stages of the second feature of the evening. The biggest mover in the early laps was undoubtedly Mat Williamson, who started at the back of the top ten and worked up to fourth by lap six. In front of Williamson, Dunn had caught traffic by lap eight, and Sheppard was ready to pounce.

The traffic also allowed third place Stewart Friesen to reel in the top two, and Friesen brought Williamson with him. On lap 10, Williamson got by Friesen, but just in front of him, Sheppard snuck under Dunn to take the lead.

As quickly as Sheppard took the lead, he lost it. Dunn went back to the lead on lap 11, then Williamson drove to second under Sheppard. Friesen put Sheppard back to fourth, but Sheppard came right back for third once again. By lap 13, Sheppard was back to fifth as Perrego got by.

Williamson’s charge continued, as he was all over Dunn for the lead. On lap 15, Williamson took his shot and got the top spot from Dunn, but while Williamson and Dunn battled, they were three-wide with lapped car Jordan Watson.

The end result of the three-wide battle was Watson in the wall, and the caution waived on lap 15. Dunn was scored the most recent leader and was in control on the restart, with Williamson, Friesen, and Sheppard behind.

Using the top, Williamson got the lead on the restart. Once in clean air, Williamson throttled down and put distance between himself and Dunn, as Dunn was left to hold off Friesen. Further back, Erick Rudolph had climbed to sixth from the rear.

After a couple quick cautions, Friesen was able to take second from Dunn, who had a bad lap 19 restart to slip to fifth. Williamson built up a comfortable lead in the initial laps after the restart, but Friesen found the topside to his liking just after halfway.

With Williamson in the middle, Friesen went to the outside wall and chased down Williamson, getting to his door on lap 25. After two more laps of trying, Friesen secured the lead on lap 27, threading the needle between Williamson and the wall down the frontstretch.

“The top was slowly coming in, and we kept working and working up there,” mentioned Friesen. “It was fun ripping the boards.  Mat was committed to the middle so we got up there, and this car just sat on the right front and did what it needed to do. It was a lot of fun, we were able to use all the track and get it done.”

With ten laps left, Friesen was literally in his own lane around the far outside. Once he got passed, Williamson altered his line to more closely resemble Friesen’s, and in turn was able to keep the gap steady at a second and a half. With six to go, a lapped car found the outside fence, and the caution waived once more.

Williamson got a great restart and nearly got the lead from Friesen, but Friesen held on. Meanwhile, Sheppard was now a contender for the win, looking low on Williamson for second, but Williamson held the runner up spot. Friesen couldn’t shake Williamson, and Friesen’s lead was only a couple car lengths with three to go.

In the final laps, Friesen hit his marks flawlessly and kept Williamson at bay, sweeping the evening and taking the win in the 40-lap Short Track Super Series event.

In the $1,250 to win Crate 602 Sportsman feature, Tony Ballastero used a late race pass of Grant Hilfiger to score the victory to give the Ballastero brothers the clean sweep of the night on their dad’s birthday.  Hilfiger finished in second followed by Tim Hartman Jr., Robert Delormier, and Kevin Chaffee.