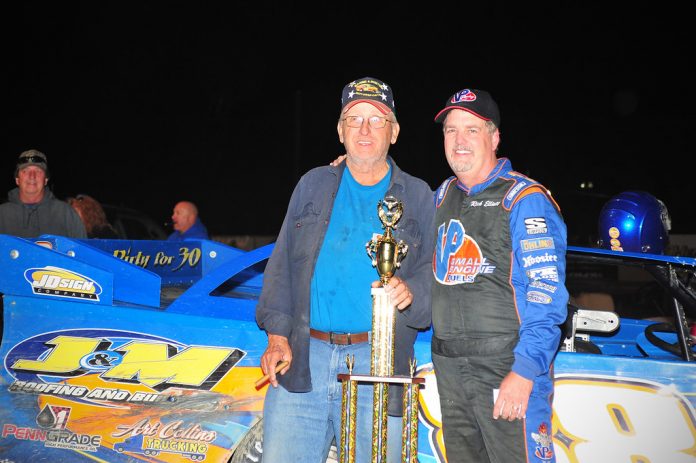 “He did so much for so many,” said Brett Deyo.

The “He” was Jake Marine, a supporter of Delaware dirt racing for more than a half century.

Jake was stricken in the pits at All-Tech Raceway on Wednesday and passed away.

He left a gigantic imprint in Delaware racing and is being remembered by many pit-side at the northern Florida facility this week.

Promoter Brett Deyo said, “This is a big impact on Delaware racing. He owned cars, he had things that he got for guys, loaned cars and even bought tires for drivers. He helped out so many drivers.”

Deyo talked about the type of man that Marine was and explained, “I had a big show scheduled at Georgetown and two years ago on July 4 I got a call from the State Police saying a microburst had taken out the back stretch wall that separated the track from the highway. “I had a huge sprint-mod show in just 12 days. Jake sent a crew over and for seven days straight, including Sunday, and they fixed the damage. We got to race and that saved our season. It wasn’t covered by insurance because the company said,’it was an act of God’ and Jake told me he just wanted me to pay for the goods, but didn’t charge me at all.”

Continuing he said, “The last conversation I had with him was two weeks ago. He knew I was building a new pit grandstand and just called to ask if his guys could help us if we needed them. He was that type of guy.”

New York Modified veteran Justin Haers flew in to northern Florida on Friday morning and he will be racing with a heavy heart at All-Tech.

Haers reflected on the man who had become a good friend of his as he said, “I met Jake at Volusia about three or four years ago. I gave him a ride in my golf cart from the gator pond to the sign in booth. I won that night and after the race I told him that I had to give him a ride every day to the sign in.”

Continuing he said, “After I flipped at Canandaigua a couple of years ago he called up on Monday to see how I was feeling. I told him I was a bit sore and bruised up, but the car was a write off. A month later when I ordered a car he sent me some money for the frame and body. That is when our relationship started.”

Talking about Jake, Justin said, “He was a good guy who would give you the shirt off his back. We were still at home when we heard the news, but I looked at it that he would want me to race. This was the car we drove at the Oswego small-block show last year.”

Looking toward the night of racing, Haers explained, “It is not easy to race, but I feel I just had to. I am running for him. I think in the back of my mind he would want me to do it. We talked one or two times a week and he is gonna be missed. I could call him for anything.”

Delaware racing legend Ricky Elliott is now working on the Gary Simpson owned Larry Wight driven machine, but he has a long memory of what Jake Marine did for him.

Elliott said, “We were together for almost 30 years and he just loved racing. He has had drivers like Hal Browning, Nelson James, Gary Gollub and myself and there aren’t many people that he didn’t help in the State of Delaware. He simply loved dirt Modified racing.”

Continuing he noted, “I guess you could compare him to J.D. Stacey in NASCAR or southern Late Model’s Jack Starrette as he did the same type of thing for dirt Modifieds. Delaware racing has lost the most important person who helped the most people.”

Marine and Elliott combined for success in Modifieds and Super Late Models including an Elliott win at Charlotte in a Big Block in 2004.

Ricky said, “I got to know him as we lived in the same town and I have known him my entire life. Over the years he probably has bought 50 Late Models and Modifieds. He will be missed.”

Jake’s attention wasn’t simply limited to Modifieds as Scott Hitchens (running both Big Block and Crates at All-Tech) noted, “Jake really took care of me. I put a body on the car and he let me wait until nearly a half year was gone to pay for it. He gave me my first real shot.”

Hitchens had won nearly 20 features in a Crate and won the Delaware International championship with assistance from Marine.

He said,”I have lost a real good friend. He was a guy you could rely on and would tell me what I was doing wrong even if he did it that way. He came over Wednesday afternoon and we talked and B.S.’d for nearly an hour and then we lost him. He went away in the favorite place he wanted to be.”

Jake Marine was a name that was legendary in the State of Delaware and even though everyone is starting a new year of racing for many the start in Florida will be with a heavy heart because of the man who has done so much for so many has passed away.