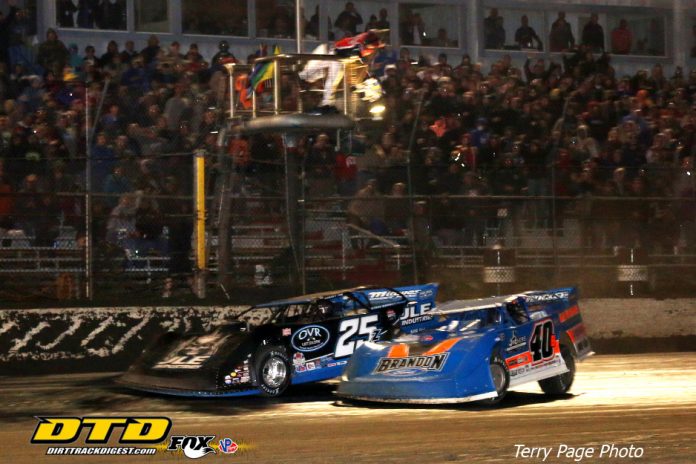 TAMPA, FL – Former Lucas Oil Late Model Dirt Series Rookie-of-the-Year Mason Zeigler narrowly edged out Kyle Bronson at the finish line to win Friday Night’s Wrisco Industries Winternationals at East Bay Raceway Park. For Zeigler, it was his second career Lucas Oil Late Model Dirt Series win, with both coming at East Bay Raceway Park.
A caution with nine laps to go caused a frantic single-file restart. Zeigler made a charge to the lead as he and Bronson traded the lead twice in the final four laps to win by a scant .068 seconds.
Bronson finished second in the Brandon Ford Rocket with Brandon Sheppard taking third in the Valvoline Mark Richards Racing Rocket 1 House Car. Tyler Erb finished in fourth, followed by Jonathan Davenport who completed the top five.
Before a packed house, Sheppard was looking for his third win of the week, bolted to the lead with Tyler Erb and Jimmy Owens trailing. Sheppard held off Erb for the first eight laps of the race until the first caution came out. On the restart, Bronson gained the lead for the first time in the race as he passed Sheppard for the top spot. Sheppard fell to second, with Owens still holding the third spot.
On lap 17, Josh Richards, who was running fourth after starting 10th, slowed with drive line failure. On the restart, there would a long green flag run for 24 laps with Bronson holding the point. With ten laps to go the running order was Bronson, Sheppard, Erb, Jonathan Davenport and Zeigler.
A caution for a slowing Boom Briggs on lap 41 set up, what would be a classic, East Bay finish. On the restart with nine laps to go, Bronson would carry the lead, to within five laps of victory, but Zeigler was picking off cars one-by-one as he climbed to third and then eventually second with four laps remaining.
Zeigler and Bronson had an epic battle for the race lead with Bronson yielding the lead to Zeigler on lap 48, but Bronson came back to lead. On the final lap, Zeigler went back around Bronson and as they came to the checkers, Zeigler would edge Bronson by a nose for his first series win since winning at East Bay in 2016.
Zeigler, the 2018 Lucas Oil Late Model Dirt Series Rookie-of-the-Year was ecstatic with the win before a cheering crowd in Lucas Oil Victory Lane. “I knew Kyle (Bronson) was going to be tough because that cushion was still pretty good up there. The cautions really helped me because their tires were getting a little cool and I could just work that middle (groove). I knew if I could just get ahead of him, clear him, and take his nose getting into (turns) one and two, we could drive away. He gave me all I wanted. I didn’t expect that slider. I didn’t think he’d be able to pull up alongside me again, and he sure as heck did. We just had barely enough room there. I did everything I could not to door him, it’s just hard-core racing. This place is elbows up and get after it. We’re just happy to come out here and put on a show.”
Bronson was looking for his second career Series win during the East Bay Winternationals, and led 40 of the 50 laps but came up just short. “The late caution definitely hurt me there. I felt like I had a little bit of a gap before that happened, but we had a 1300 on, and them guys had a 40 on. At the end there, when we fired up with nine laps to go, I knew my tire was done. I drove as hard as I could, I felt like, without putting it into the fence. Mason did a good job. He raced me hard, he raced me clean, I wasn’t going to wreck him as clean as he raced me. That’s all I could do to hold him back, I just couldn’t beat that tire. He did a good job. I’d like to thank my guys. We destroyed a car this week and put this Crate car together, and come back and raced last night. I’ve got some momentum going now and hopefully we’ll win $12,000 tomorrow.”
Sheppard was on a mission to win his third race of the week and led the first 8 laps, and ultimately took another podium finish. “At the beginning, I was going too hard and was overheating my tires on the long runs. Every time I tried to move down, I wasn’t any good, but it was because I was overheating my tires. I think Mason had a little different tire than we did, and that probably helped him get down there in the black. Once Kyle passed me there I was just kind of just riding behind him.”
The winner’s Fred Zeigler-owned Rocket Chassis is powered by a Cornett Racing Engine and sponsored by JLE Industries, Ohio Pyle Vacation Rentals, Midwest Sheet Metal, and MS Shock Therapy.
The rest of top ten finishers were Mike Marlar, Tim McCreadie, Tanner English, Brian Shirley, and Tyler Bruening.
Lucas Oil Late Model Dirt Series
Race Summary
Wrisco Industries Winternationals – presented by Lucas Oil
Friday, February 7th, 2020
East Bay Raceway Park – Tampa, FL